The park is bisected by the Victoria Nile, which plunges 45m over the remnant rift valley wall, creating the dramatic Murchison Falls, the centerpiece of the park and the final event in an 80km stretch of rapids. The mighty cascade drains the last of the river's energy, transforming it into a broad, placid stream that flows quietly across the rift valley floor into Lake Albert. This stretch of river provides one of Uganda's most remarkable wildlife spectacles. Regular visitors to the riverbanks include elephants, giraffes and buffaloes; while hippos, Nile crocodiles and aquatic birds are permanent residents

Murchison Falls National Park is Uganda's largest national park. It measures approximately 3,893 square kilometres (1,503 sq mi). The park is bisected by the Victoria Nile from east to west for a distance of about 115 kilometres (71 mi). The park is the location of the Murchison Falls, where the waters of the Nile flow through a narrow gorge only 7 metres (23 ft) wide before plunging 43 metres (141 ft). Also in the park, adjacent to the Masindi-Gulu Highway, are the Karuma Falls, the location of the 600 megawatt Karuma Power Station, which will be Uganda's largest power station when it comes online circa 2018.

Murchison Falls National Park lies at the northern end of the Albertine Rift Valley, where the sweeping Bunyoro escarpment tumbles into vast, palm-dotted Savannah. First gazetted as a game reserve in 1926, it is Uganda's largest and oldest conservation area, hosting 76 species of mammals and 451 birds.

Murchison Falls national park straddles the Ugandan districts of Buliisa, Nwoya, Kiryandongo, and Masindi. The driving distance from Masindi, the nearest large town, to the Kibanda area of the national park is about 72 kilometres (45 mi). This area is about 283 kilometres (176 mi), by road, north-west of Kampala, the capital and largest city of Uganda. The coordinates of the park near the Kibanda area are 02°11'15.0"N, 31°46'53.0"E (Latitude:2.187499; Longitude:31.781400).

The explorers John Speke and James Grant were the first Europeans to visit the present day Murchison Falls National Park in 1862. It was more thoroughly explored by Samuel and Florence Baker in 1863-4. Baker named the falls Murchison Falls after the geologist Roderick Murchison, then the president of the Royal Geographical Society.

Between 1907 and 1912, the inhabitants of an area of about 13,000 square kilometres (5,000 sq mi) were evacuated due to sleeping sickness spread by tse-tse flies. In 1910, the Bunyoro Game Reserve was created south of the River Nile. That area roughly corresponds to the part of the Murchison Falls National Park that is in the districts of Buliisa, Masindi, and Kiryandongo. In 1928, the boundaries were extended north of the river into the modern-day Nwoya District. In 1952, the British administration established the National Parks Act of Uganda. The area described above became Murchison Falls National Park.

Murchison Falls is characterized by eternal war between rock and water. The waters violently compress through a narrow gorge, spraying misty droplets along their wake over a 50m radius. This creates a permanent rainbow over the battlefield and causes a continuous roar. From Baker Point on the southern side, you can also view the Nile splitting into the smaller Uhuru Falls, created in 1962 when the river burst its banks.

A boat ride along the Nile to the foot of Murchison Falls is a rewarding experience for nature lovers, as the northern bank teems with a variety of mammals, birds and reptiles. Guided nature walks along both the north and south banks are another refreshing activity, and sport fishing is also possible here. Rafting will be available starting in 2012.

The Buligi game tracks, stretching between the Victoria and Albert Niles, are the Murchison Falls National Park’s most popular safari destination. At around 120-170km in length, they pass through open Savannah grassland, woodland, acacia and riverine vegetation. Most of the park’s game can be viewed here, especially during early morning and early evening tours.

The Karuma Falls are located in Chobe, in the northeastern sector of the park. These roaring waterfalls on the Victoria Nile are made up of a series of natural rock formations which cause the waters to ripple and give them a white, foamy appearance. It is an ideal area for sport fishing.

Surrounded by Savannah and covering just 4km2, Rabongo Forest is considered a birders’ paradise because of the endangered species found here. Rabongo is ideal for educational tours as it provides opportunities to identify animals, birds, medicinal plants and trees. For relaxation, visitors can camp and enjoy picnics by the Wairingo River.

Paraa, meaning home of the hippo in the local Luo language, is the park’s tourism hub. All the park’s access roads converge here as the northern and southern banks are linked by a passenger ferry, and several accommodations are located nearby. Additionally, a museum and gift shop can be found on the north bank, and most game drives, launch trips and nature walks commence here.

In the south of Murchison Falls Conservation Area, this forest ecosystem contains black-and-white colobus and blue monkeys, olive baboons, and a habituated chimp group which can be tracked. Elephants, buffalos, lions and leopards are also frequent visitors. Many forest birds can be viewed here, including the chocolate-backed kingfisher, white-thighed hornbill and Puvel's illadopsis which is found nowhere else in East Africa.

The park is home to 76 species of mammals including four of the “Big Five”, with huge herds of buffaloes and elephants, well-camouflaged leopards and a healthy population of lions. It is also known for its giraffes; in Uganda these can only be viewed here and in Kidepo Valley. Other species viewed regularly along the game tracks include Jackson’s hartebeest, bushbucks, Uganda kob, waterbucks and warthogs. Resident crocodiles and hippos as well as other, visiting wildlife are found along the river.

Olive baboons are common along the roadsides – be sure to keep car windows and doors shut if you don’t want to lose your lunch! Blue and red-tailed monkeys and black-and-white colobus can be found in the forested sectors. The Savannah-dwelling patas monkey is only found here and in Kidepo Valley National Park. Around 800 chimpanzees live in the Kaniyo Pabidi and Budongo Forests.

Murchison Falls national park has also got amazing accommodation options for you to stay. 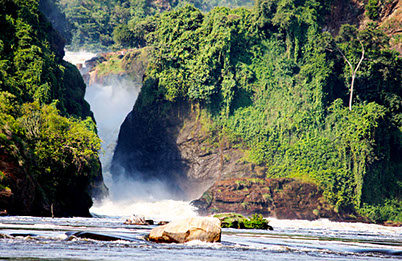 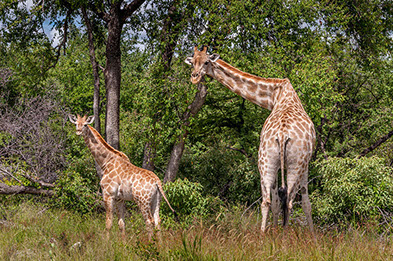 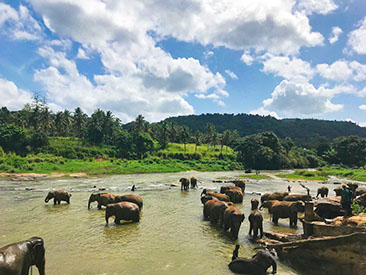 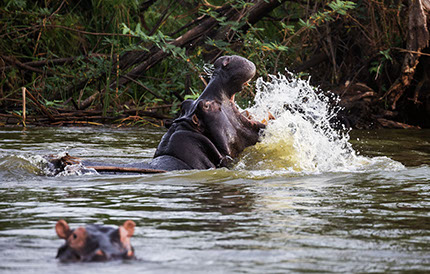