What is a Giraffe?

The Giraffe is an African mammal, the tallest living terrestrial animal and the largest ruminant. It is traditionally considered to be one species, with nine subspecies. However, the existence of up to eight extant giraffe species has been described, based upon research into the mitochondrial and nuclear DNA, as well as morphological measurements of Giraffa. Seven other species are extinct, prehistoric species known from fossils.

They are the world’s tallest mammals. They are uniquely adapted to reach vegetation inaccessible to other herbivores. Unusually elastic blood vessels and uniquely adapted valves help offset the sudden buildup of blood (to prevent fainting) when giraffes’ heads are raised, lowered, or swung quickly. Their "horns" are actually knobs covered with skin and hair above the eyes that protect the head from injury. Their necks contain the same amount of vertebrae as we do (seven) except their bones are extremely elongated making their neck a long length of 2.4 meters.

The giraffe's prehensile tongue is about 45 cm (18 in) long. It is purplish-black in colour, perhaps to protect against sunburn, and is useful for grasping foliage, as well as for grooming and cleaning the animal's nose. The upper lip of the giraffe is also prehensile and useful when foraging and is covered in hair to protect against thorns. The tongue, and inside of the mouth are covered in papillae.

The coat has dark blotches or patches (which can be orange, chestnut, brown, or nearly black in colour separated by light hair (usually white or cream in colour). Male giraffes become darker as they age. The coat pattern has been claimed to serve as camouflage in the light and shade patterns of savannah woodlands. Giraffe calves inherit some spot pattern traits from their mothers, and variation in some spot traits are correlated with neonatal survival. The skin underneath the dark areas may serve as windows for thermoregulation, being sites for complex blood vessel systems and large sweat glands. Each individual giraffe has a unique coat pattern.

The skin of a giraffe is mostly gray. Its thickness allows the animal to run through thorn bushes without being punctured. The fur may serve as a chemical defence, as its parasite repellents give the animal a characteristic scent. At least 11 main aromatic chemicals are in the fur, although indole and 3-methylindole are responsible for most of the smell. Because the males have a stronger odour than the females, the odour may also have sexual function 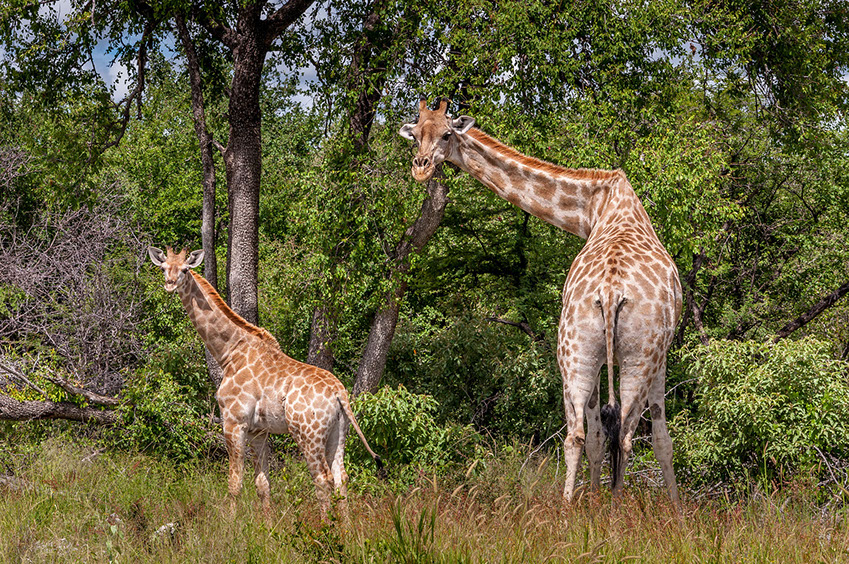 Where do Giraffes Live?

Giraffes usually inhabit savannahs and open woodlands of Africa. They prefer Acacia, and open woodlands over denser environments like Brachystegia woodlands. The Angolan giraffe can be found in desert environments. Giraffes browse on the twigs of trees, preferring trees of the subfamily Acacieae, which are important sources of calcium and protein to sustain the giraffe's growth rate. They also feed on shrubs, grass and fruit. A giraffe eats around 34 kg (75 lb) of foliage daily. When stressed, giraffes may chew the bark off branches. Although herbivorous, the giraffe has been known to visit carcasses and lick dried meat off bones. They have adapted to a variety of habitats and can be found in desert landscapes to woodland and savanna environments south of the Sahara, wherever trees occur.

What are the Behaviours of Giraffes?

Giraffes are usually found in groups that vary in size and composition according to ecological, anthropogenic, temporal, and social factors. More recent studies have found that giraffes have long-term social associations and may form groups or pairs based on kinship, sex or other factors. These groups may regularly associate with one another in larger communities or sub-communities within a fission–fusion society.

Giraffe groups tend to be sex-segregated although mixed-sex groups made of adult females and young males are known to occur. Particularly stable giraffe groups are those made of mothers and their young, which can last weeks or months. Social cohesion in these groups is maintained by the bonds formed between calves. 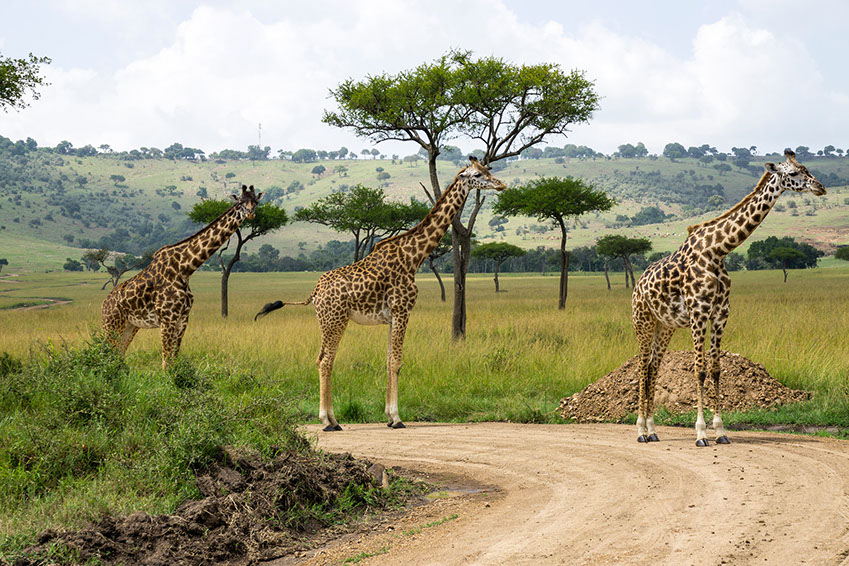 What do Giraffes eat?

They feed 16 to 20 hours a day, but may only consume about 30 kilograms (about 30 pounds) of foliage during that time. These two-ton mammals can survive on as little as seven kilograms (15 pounds) of foliage per day. While these browsers’ diverse diets have been reported to contain up to 93 different plant species, acacia trees have been found to be their favorite food source.

Feeding is at its highest during the first and last hours of daytime. Between these hours, giraffes mostly stand and ruminate. Rumination is the dominant activity during the night, when it is mostly done lying down.

During the wet season, food is abundant and giraffes are more spread out, while during the dry season, they gather around the remaining evergreen trees and bushes. Mothers tend to feed in open areas, presumably to make it easier to detect predators, although this may reduce their feeding efficiency 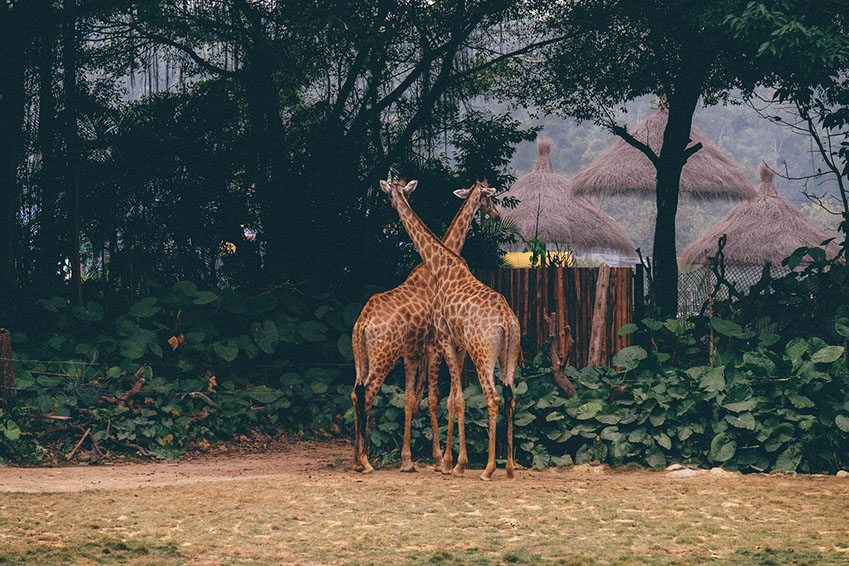