What is a Ring-tailed Lemur?

The Ring-tailed Lemur is one of many lemur primate species and the most recognized lemur due to its long, black and white ringed tail. It belongs to Lemuridae, one of five lemur families, and is the only member of the Lemur genus. Like all lemurs it is endemic to the island of Madagascar. Known locally in Malagasy as maky, inhabits gallery forests to spiny scrub in the southern regions of the island. It is omnivorous and the most terrestrial of extant lemurs. The animal is diurnal, being active exclusively in daylight hours. Although the term "lemur" was first intended for slender lorises, it was soon limited to the endemic Malagasy primates, which have been known as "lemurs" ever since. The name derives from the Latin term lemures, which refers to specters or ghosts that were exorcised during the Lemuria festival of ancient Rome.

The ring-tailed lemur is highly social, living in groups of up to 30 individuals. It is also female dominant, a trait common among lemurs. To keep warm and reaffirm social bonds, groups will huddle together. The ring-tailed lemur will also sunbathe, sitting upright facing its underside, with its thinner white fur towards the sun. Like other lemurs, this species relies strongly on its sense of smell and marks its territory with scent glands. The males perform a unique scent marking behavior called spur marking and will participate in stink fights by impregnating their tail with their scent and wafting it at opponents. As one of the most vocal primates, the ring-tailed lemur uses numerous vocalizations including group cohesion and alarm calls. Experiments have shown that the ring-tailed lemur, despite the lack of a large brain (relative to simiiform primates), can organize sequences, understand basic arithmetic operations and preferentially select tools based on functional qualities. 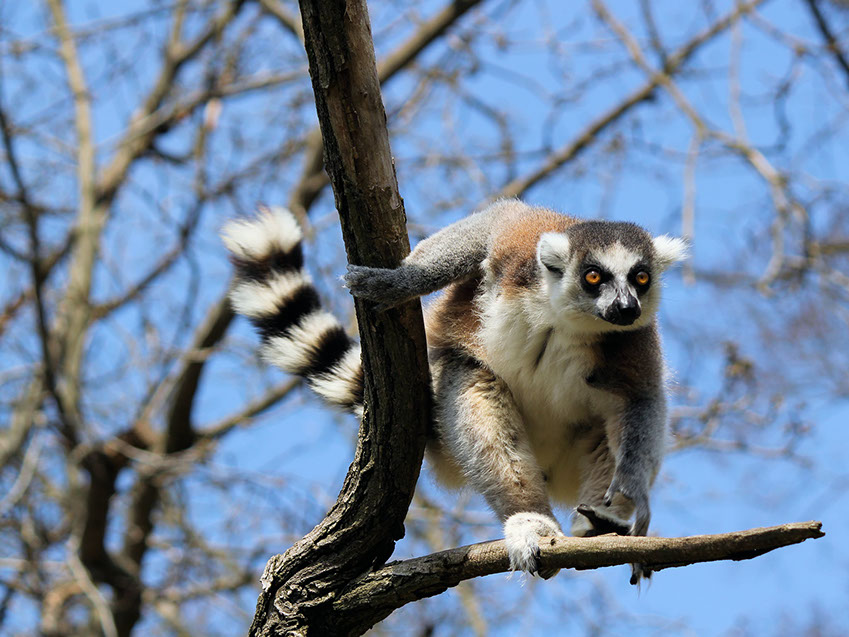 Where do Ring-tailed Lemurs Live?

The Ring-tailed Lemur species is only found in Africa, in Madagascar. Ring-tailed Lemurs are the only lemur primate species found only on the African island of Madagascar and some tiny neighbouring islands. Because of its geographic isolation, Madagascar is home to many amazing animals found nowhere else in the World. 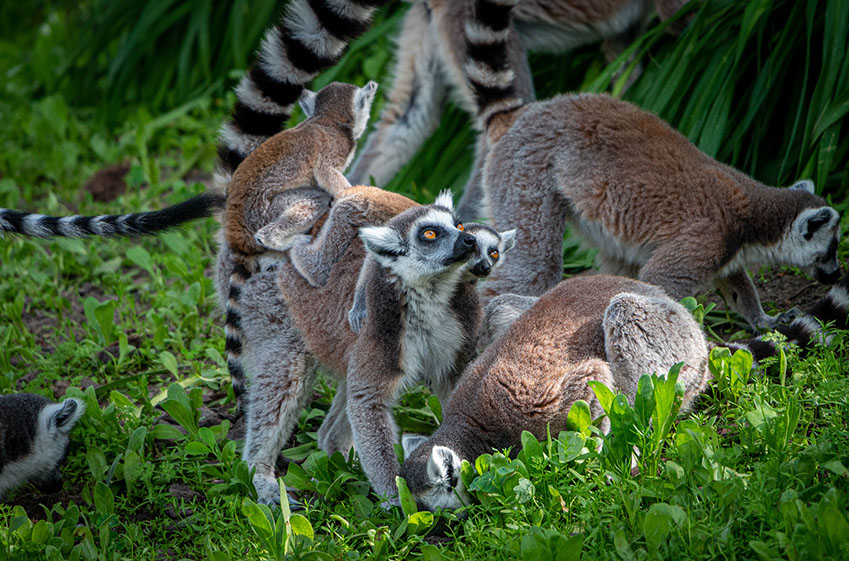 What are the Behaviours of Ring-tailed Lemurs?

The ring-tailed lemur is polygamous, although the dominant male in the troop typically breeds with more females than other males. Fighting is most common during the breeding season. A receptive female may initiate mating by presenting her backside, lifting her tail and looking at the desired male over her shoulder. Males may inspect the female's genitals to determine receptiveness. Females typically mate within their troop, but may seek outside males.

In displays of aggression, males engage in a social display behaviour called stink fighting, which involves impregnating their tails with secretions from the antebrachial and brachial glands and waving the scented tail at male rivals.

The young lemurs begin to eat solid food after two months and are fully weaned after five months. Sexual maturity is reached between 2.5 and 3 years. Male involvement in infant rearing is limited, although the entire troop, regardless of age or sex, can be seen caring for the young.  Kidnapping by females and infanticide by males also occur occasionally.

Ring-tailed lemurs have also been shown to mark using urine. Behaviourally, there is a difference between regular urination, where the tail is slightly raised and a stream of urine is produced, and the urine marking behaviour, where the tail is held up in display and only a few drops of urine are used. The urine-marking behaviour is typically used by females to mark territory, and has been observed primarily at the edges of the troop's territory and in areas where other troops may frequent. The urine marking behaviour also is most frequent during the mating season, and may play a role in reproductive communication between groups.

The ring-tailed lemur is one of the most vocal primates and has a complex array of distinct vocalizations used to maintain group cohesion during foraging and alert group members to the presence of a predator.

In the mornings the ring-tailed lemur sunbathe to warm itself. It faces the sun sitting in what is frequently described as a "sun-worshipping" posture or lotus position. However, it sits with its legs extended outward, not cross-legged, and will often support itself on nearby branches. Sunning is often a group activity, particularly during the cold mornings. At night, troops will split into sleeping parties huddling closely together to keep warm.

Despite being quadrupedal the ring-tailed lemur can rear up and balance on its hind legs, usually for aggressive displays. When threatened the ring-tailed lemur may jump in the air and strike out with its short nails and sharp upper canine teeth in a behaviour termed jump fighting. This is extremely rare outside of the breeding season when tensions are high and competition for mates is intense. 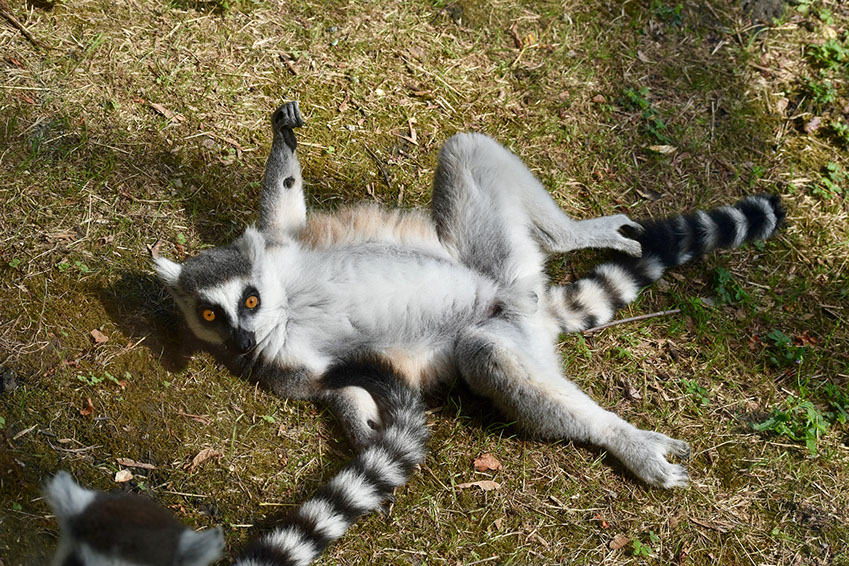 What do Ring-tailed Lemurs eat?

Ring-tailed lemurs are omnivores. These animals generally consume plants, leaves, flowers, nectar, fruit, sap and bark, often supplementing their usual diet with insects, chameleons and small birds. The ring-tailed lemur is an opportunistic omnivore primarily eating fruits and leaves, particularly those of the tamarind tree, known natively as kily. When available, tamarind makes up as much as 50% of the diet, especially during the dry, winter season. The ring-tailed lemur eats from as many as three dozen different plant species, and its diet includes flowers, herbs, bark and sap. It has been observed eating decayed wood, earth, spider webs, insect cocoons, arthropods (spiders, caterpillars, cicadas and grasshoppers) and small vertebrates (birds and chameleons). 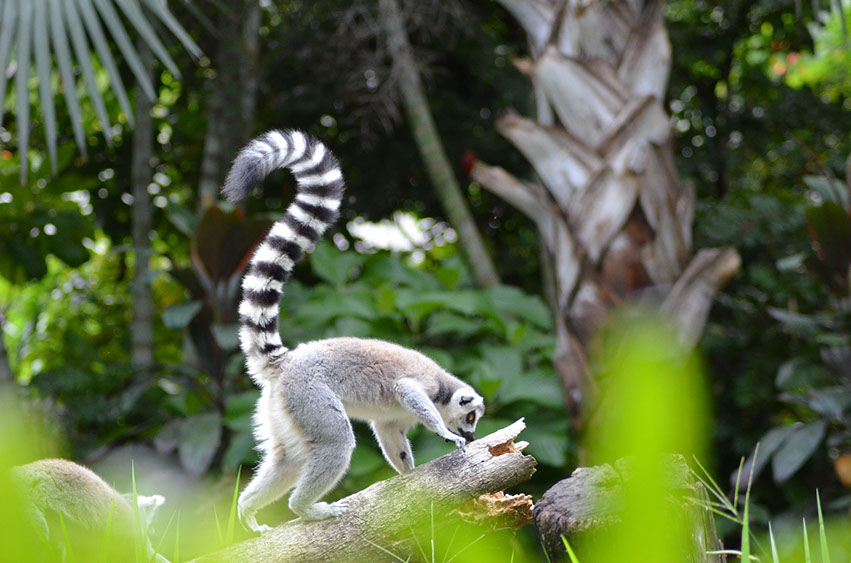 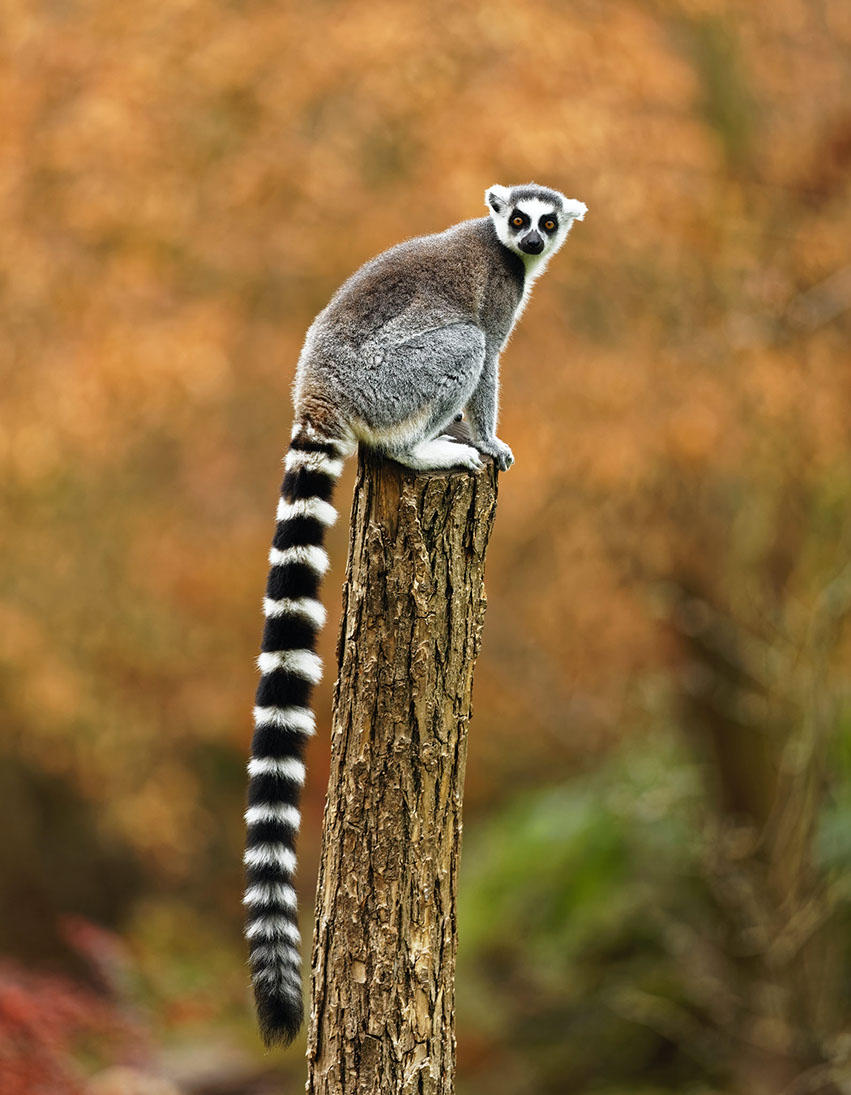