20 years in the wild

What is a Wildebeest?

Wildebeest (also called a gnu) are a member of the antelope family. They have a large, box-like head with curving horns. The front end of their body is heavily built, while the hindquarters are slender with spindly legs. They have a gray coat and a black mane as well as a beard that can be black or white. There are several races of wildebeest. The species forming the large herds of the Serengeti-Mara ecosystem of Kenya and Tanzania is known as the western white-bearded wildebeest, while the eastern white-bearded races inhabit Kenya and Tanzania east of the Gregory Rift. The brindled, or blue, race occurs south of the Zambezi River.

Fossil records suggest these two species diverged about one million years ago, resulting in a northern and a southern species. The blue wildebeest remained in its original range and changed very little from the ancestral species, while the black wildebeest changed more as adaptation to its open grassland habitat in the south. The most obvious way of telling the two species apart are the differences in their colouring and in the way their horns are oriented.

Wildebeest often graze in mixed herds with zebra, which gives heightened awareness of potential predators. They are also alert to the warning signals emitted by other animals such as baboons. Wildebeest are a tourist attraction but compete with domesticated livestock for pasture and are sometimes blamed by farmers for transferring diseases and parasites to their cattle. Some illegal hunting goes on but the population trend is fairly stable and some populations are in national parks or on private land. 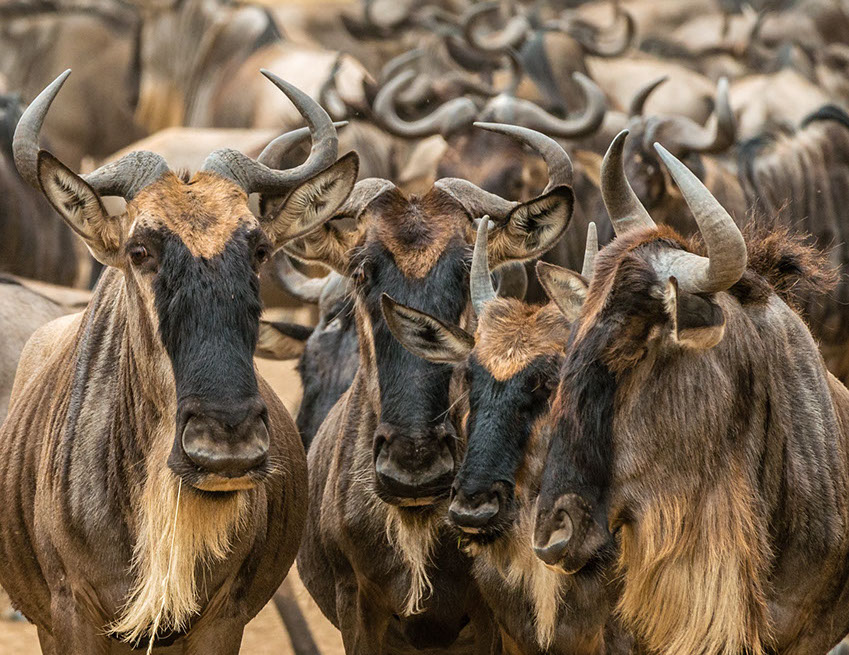 Where do Wildebeest Live?

The Wildebeest is native to eastern and southern Africa. Its range includes Kenya, Tanzania, Botswana, Zambia, Zimbabwe, Mozambique, South Africa, Swaziland and Angola. It is no longer found in Malawi but has been successfully reintroduced into Namibia. Blue wildebeest are mainly found in short grass plains bordering bush-covered acacia savannas, thriving in areas that are neither too wet nor too dry. They can be found in habitats that vary from overgrazed areas with dense bush to open woodland floodplains. In East Africa, the blue wildebeest is the most abundant big game species, both in population and biomass. It is a notable feature of the Serengeti National Park in Tanzania, the Maasai Mara National Reserve in Kenya and the Liuwa Plain National Park in Zambia

What are the Behaviours of Wildebeest?

Blue wildebeest have both migratory and sedentary populations. In the Ngorongoro, most animals are sedentary and males maintain a network of territories throughout the year, though breeding is seasonal in nature. Females and young form groups of about 10 individuals or join together in larger aggregations, and nonterritorial males form bachelor groups. In the Serengeti and Tarangire ecosystems, populations are mostly migratory, with herds consisting of both sexes frequently moving, but resident subpopulations also exist. During the rutting season, the males may form temporary territories for a few hours or a day or so, and attempt to gather together a few females with which to mate, but soon they have to move on, often moving ahead to set up another temporary territory.

Each year, some East African populations of blue wildebeest have a long-distance migration, seemingly timed to coincide with the annual pattern of rainfall and grass growth. The timing of their migrations in both the rainy and dry seasons can vary considerably (by months) from year to year. At the end of the wet season (May or June in East Africa), wildebeest migrate to dry-season areas in response to a lack of surface (drinking) water. When the rainy season begins again (months later), animals quickly move back to their wet-season ranges. Factors suspected to affect migration include food abundance, surface water availability, predators, and phosphorus content in grasses.

What do Wildebeest eat?

These large mammals are continually on the move, as they seek favorable supplies of grass and water. The famous Serengeti population of wildebeest is a very large nomadic group. This group makes a migratory circle of 800 to 1,610 kilometers (500 to 1,000 miles) each year, beginning right after the calving season at the start of the year. They are relentless in their advance and many are injured, lost (especially calves), or killed. By the end of the dry season, the wildebeest have almost exhausted the grazing lands and return to the Serengeti plains as the rains begin. 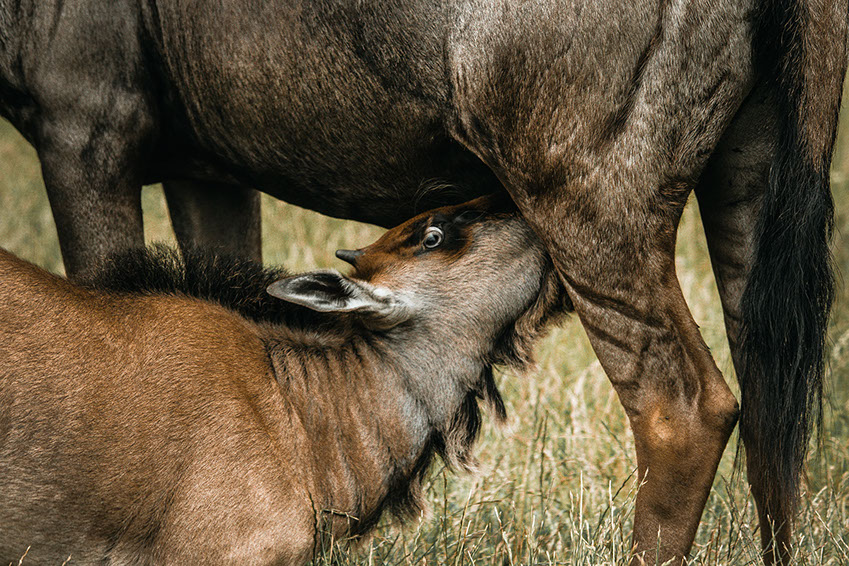