The Music in Africa

African music is a tradition mainly played at gatherings at special occasions the traditional music of Africa, given the vastness of the continent, is historically ancient, rich and diverse, with different regions and nations of Africa having many distinct musical traditions. Music in Africa is very important when it comes to religion. Songs and music are used in rituals and religious ceremonies, to pass down stories from generation to generation, as well as to sing and dance to.

Traditional music in most of the continent is passed down orally (or aurally) and is not written. In sub-Saharan African music traditions, it frequently relies on percussion instruments of every variety, including xylophones, djembes, drums, and tone-producing instruments such as the mbira or "thumb piano."

The music and dance of the African diaspora, formed to varying degrees on African musical traditions, include American music and many Caribbean genres, such as soca, calypso (see kaiso) and zouk. Latin American music genres such as the rumba, conga, bomba, cumbia, salsa and samba were founded on the music of enslaved Africans, and have in turn influenced African popular music.

Like the music of Asia, India and the Middle East, it is a highly rhythmic music. African music consists of complex rhythmic patterns, often involving one rhythm played against another to create a polyrhythm. The most common polyrhythm plays three beats on top of two, like a triplet played against straight notes. Beyond the rhythmic nature of the music, African music differs from Western music in that the various parts of the music do not necessarily combine in a harmonious fashion. African musicians aim to express life, in all its aspects, through the medium of sound. Each instrument or part may represent a particular aspect of life, or a different character; the through-line of each instrument/part matters more than how the different instruments and parts fit together. African music does not have a written tradition; there is little or no written music to study or analyze. 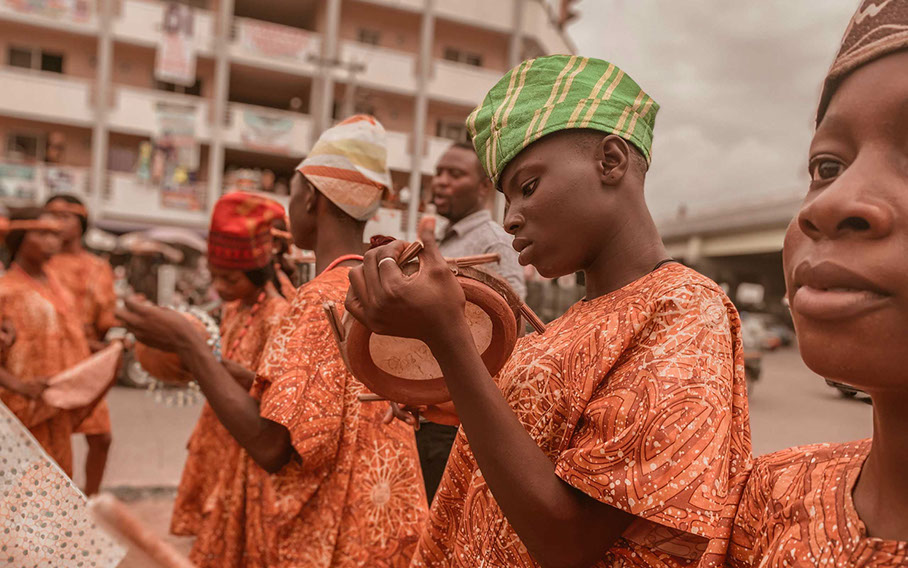 Besides vocalisation, which uses various techniques such as complex hard melisma and yodel, a wide array of musical instruments are used. African musical instruments include a wide range of drums, slit gongs, rattles and double bells, different types of harps, and harp-like instruments such as the Kora and the ngoni, as well as fiddles, many kinds of xylophone and lamellophone such as the mbira, and different types of wind instrument like flutes and trumpets. Additionally, string instruments are also used, with the lute-like oud and Ngoni serving as musical accompaniment in some areas.

There are five groups of sub-Saharan African musical instruments: membranophones, chordophones, aerophones, idiophones, and percussion. Membranophones are the drums, including kettles, clay pots, and barrels. Chordophones are stringed instruments like harps and fiddles. Aerophones are another name for wind instruments. These can include flutes and trumpets, similar to the instruments you hear in American music. Idiophones are rattles and shakers, while percussion can be sounds like foot-stomping and hand-clapping. Many of the wooden instruments have shapes or pictures carved out into them to represent ancestry. Some are decorated with feathers or beads.

Drums used in African traditional music include talking drums, bougarabou and djembe in West Africa, water drums in Central and West Africa, and the different types of ngoma drums (or engoma) in Central and Southern Africa. Other percussion instruments include many rattles and shakers, such as the kosika (kashaka), rain stick, bells and wood sticks. Also, Africa has lots of other types of drums, and lots of flutes, and lots of stringed and wind instruments.

The playing of polyrhythms is one of the most universal characteristics of Sub-Sarahan music, in contrast to polyphony in Western music. Several uniquely designed instruments have evolved there over time to facilitate the playing of simultaneous contrasting rhythms. The mbira, kalimba, Kora, Ngoni and dousn'gouni are examples of these instruments which organize notes not in the usual single linear order from bass to treble, but in two separated rank arrays which allows additional ease in playing cross rhythms.