Bwindi Impenetrable National Park is Africa's top tour destination for mountain Gorilla tracking and viewing, with a spectacular vegetation cover, a great view, culture and tour activities. Bwindi Impenetrable National Park lies in southwestern Uganda on the edge of the Rift Valley. Its mist-covered hillsides are blanketed by one of Uganda's oldest and most biologically diverse rainforests, which dates back over 25,000 years and contains almost 400 species of plants. More famously, this “impenetrable forest” also protects an estimated 400 mountain gorillas – roughly half of the world’s population, including several habituated groups, which can be tracked.

This biologically diverse region also provides shelter to a further 120 mammals, including several primate species such as baboons and chimpanzees, as well as elephants and antelopes. There are around 350 species of birds hosted in this forest, including 23 Albertine Rift endemics.

The Bwindi Impenetrable National Park is located in the south-west of Uganda. The park is part of the Bwindi Impenetrable Forest and is situated along the Democratic Republic of the Congo (DRC) border next to the Virunga National Park and on the edge of the Albertine Rift. Composed of 321 square kilometres (124 sq mi) of both montane and lowland forest, it is accessible only on foot. BINP is a United Nations Educational, Scientific and Cultural Organization-designated World Heritage Site.

Species diversity is a feature of the park. It provides habitat for 120 species of mammals, 348 species of birds, 220 species of butterflies, 27 species of frogs, chameleons, geckos, and many endangered species. Floristically, the park is among the most diverse forests in East Africa, with more than 1,000 flowering plant species, including 163 species of trees and 104 species of ferns. The northern (low elevation) sector has many species of Guineo-Congolian flora, including two endangered species, the brown mahogany and Brazzeia longipedicellata. In particular, the area shares in the high levels of endemisms of the Albertine Rift.

The park is a sanctuary for colobus monkeys, chimpanzees, and many birds such as hornbills and turacos. It is most notable for the 400 Bwindi gorillas, half of the world's population of the endangered mountain gorillas. 14 habituated mountain gorilla groups are open to tourism in four different sectors of Buhoma, Ruhijja, Rushaga and the Nkuringo in the Districts of Kanungu, Kabale and Kisoro respectively all under the management of Uganda Wildlife Authority.

The park is composed of two blocks of forest that are connected by a corridor of forest. The shape of the park is a legacy of previous conservation management, when the original two forest blocks were protected in 1932. There is agricultural land where there were previously trees directly outside the park's borders.

The park's underlying geology consists of Precambrian shale phyllite, quartz, quartzite, schist, and granite. The park is at the edge of the Western Rift Valley in the highest parts of the Kigezi Highlands, which were created by up-warping of the Western Rift Valley. Its topography is very rugged, with narrow valleys intersected by rivers and steep hills. Elevations in the park range from 1,190 to 2,607 metres (3,904 to 8,553 ft) above sea level,  and 60 percent of the park has an elevation of over 2,000 metres (6,600 ft). The highest elevation is Rwamunyonyi Hill at the eastern edge of the park. The lowest part of the park is at its most northern tip.

The forest is an important water catchment area. With a generally impermeable underlying geology where water mostly flows through large fault structures, water infiltration and aquifers are limited. Much of the park's rainfall forms streams, and the forest has a dense network of streams.

Bwindi has a tropical climate. Annual mean temperature ranges from a minimum of 7 to 15 °C (45 to 59 °F) to a maximum of 20 to 27 °C (68 to 81 °F). Its annual rainfall ranges from 1,400 to 1,900 millimetres (55 to 75 in). Peak rainfall occurs from March to April and from September to November. The park's forest plays an important role in regulating the surrounding area's environment and climate. High amounts of evapotranspiration from the forest's vegetation increases the precipitation that the region outside the park receives. They also lessen soil erosion, which is a serious problem in south-western Uganda. They lessen flooding and ensure that streams continue to flow in the dry season

How to get there: Bwindi Impenetrable National Park

By Road: Bwindi can be reached from Queen Elizabeth National Park to the north (2-3 hours), from Kabale to the south (1-2 hours), or from Kampala via Mbarara (6-8 hours). The roads meet at Butogota, 17km from the Buhoma entrance gate. A 4WD vehicle is necessary during the rainy season. A daily bus service leaves Kampala for Butogota via Rukungiri and Kihiihi. A matatu (public minibus), hire car or boda-boda (motorcycle taxi) can be taken from Butogota to the park entrance gate at Buhoma.

By Air: Travelers can fly from Entebbe or Kampala (Kajjansi airfield) to the modern tarmac airstrip at Kisoro. Planes can also be chartered to the grass Kayonza or Savannah airstrips. Bwindi is well served by three airfields at Kayonza and Kihiihi for the northern sector and Nyakabande in Kisoro for those going to track gorillas in the southern sector (Nkuringo, Nshongi and Mishaya).

Bwindi Impenetrable National Park | Getting around:

Bwindi Impenetrable national park has also got amazing accommodation options for you to stay.

Buhoma: Where to stay

Nkuringo: Where to stay

Nyundo: Where to stay

Ruhija: Where to stay

Rushaga: Where to stay 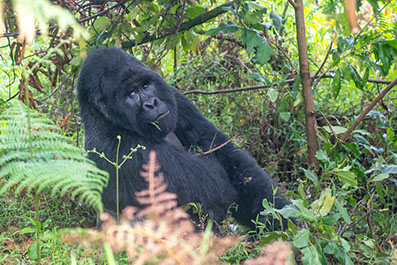 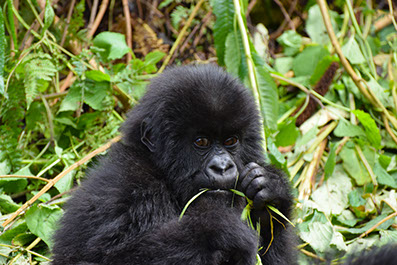