What is a Kudu?

The two species of the Kudus look quite similar, though Greaters are larger than their lesser counterparts. The largest adult male Greaters stand over 5 ft. tall, and the largest male Lessers stand about 4 ft. tall. Greater bulls also weigh several hundred pounds more than Lessers.

Both species have long horns, which point upward and slightly back, and curl in a corkscrew shape. Their coats are reddish brown, with thin white stripes down their flanks, but the number of stripes varies based on the species.

The greater kudu is a woodland antelope found throughout eastern and southern Africa. Despite occupying such widespread territory, they are sparsely populated in most areas due to declining habitat, deforestation, and poaching. The greater kudu is one of two species commonly known as kudu, the other being the lesser kudu.

Greater kudus have a narrow body with long legs, and their coats can range from brown/bluish grey to reddish brown. They possess between 4 and 12 vertical white stripes along their torso. The head tends to be darker in colour than the rest of the body, and exhibits a small white chevron which runs between the eyes. Greater kudu bulls tend to be much larger than the cows, and vocalize much more, utilizing low grunts, clucks, humming, and gasping.

The bulls also have beards running along their throats, and large horns with two and a half twists, which, were they to be straightened, would reach an average length of 120 cm (47 in), with the record being 187.64 cm (73.87 in). They diverge slightly as they slant back from the head. The horns do not begin to grow until the bull is between the ages of 6–12 months. The horns form the first spiral rotation at around 2 years of age, and not reaching the full two and a half rotations until they are 6 years old; occasionally they may even have 3 full turns.

Predators of the greater kudu generally consist of Lions, Spotted Hyenas, and African hunting dogs. Although cheetahs and leopards also prey on greater kudus, they are unable to bring down a bull, and consequently target the more vulnerable cows and offspring. There are several instances reported where Nile crocodiles have preyed on greater kudus, although based on records the larger mammalian carnivores statistically are much more dangerous to the kudu and comparable large ungulates, or at least those with a preference for dry, upland habitats over riparian or swamp areas. 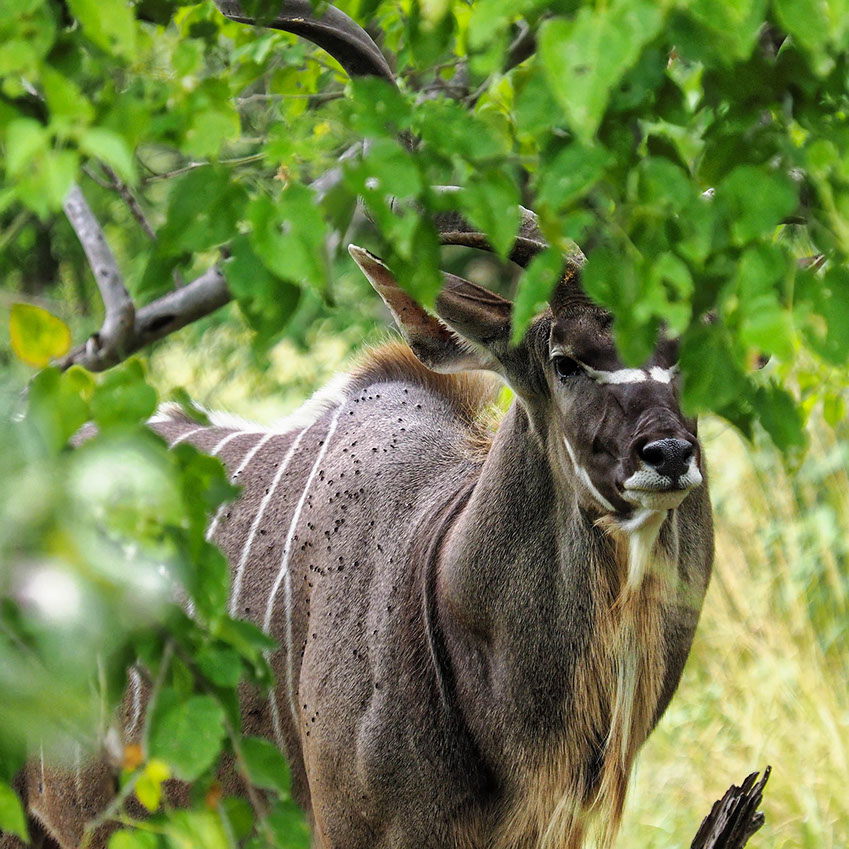 Where do Kudu Live?

Greater Kudu and Lesser Kudu have different distribution patterns. Lesser Kudus live across a small range in eastern Africa, primarily in Kenya, Somalia, Uganda and Ethiopia. Greater Kudus have a wider range, but different subspecies live in different regions. Their populations run from the border of South Africa to Angola, Zambia, Tanzania, Kenya, and Ethiopia. A small population of Greaters also lives in small parts of Chad, Sudan, and South Sudan. 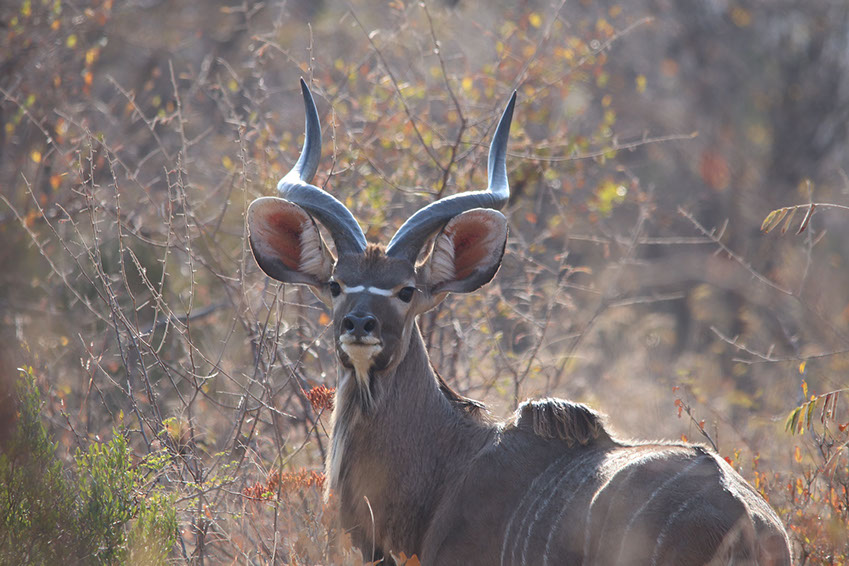 What are the Behaviours of Kudu?

These large mammals vary slightly in their activity. Some are more active at dusk and dawn, or at night, while others forage and socialize during the day. Herds are smaller than some other African antelopes, and Lesser Kudu frequently live in pairs. Females, their calves, and their sub adult offspring live in small herds together. Once males reach sexual maturity, they join bachelor groups of other males. As the breeding season approaches, the bachelor groups break up and the males seek out herds of females.

Greater kudus have a lifespan of 7 to 8 years in the wild, and up to 23 years in captivity. They may be active throughout the 24-hour day. Herds disperse during the rainy season when food is plentiful. During the dry season, there are only a few concentrated areas of food so the herds will congregate. Greater kudu are not territorial; they have home areas instead. Maternal herds have home ranges of approximately 4 square kilometers and these home ranges can overlap with other maternal herds. Home ranges of adult males are about 11 square kilometers and generally encompass the ranges of two or three female groups. Females usually form small groups of 6–10 with their offspring, but sometimes they can form a herd up to 20 individuals. Male kudus may form small bachelor groups, but they are more commonly found as solitary and widely dispersed individuals. Solitary males will join the group of females and calves (usually 6–10 individuals per group) only during the mating season (April–May in South Africa).

The male kudus are not always physically aggressive with each other, but sparring can sometimes occur between males, especially when both are of similar size and stature. The male kudus exhibit this sparring behaviour by interlocking horns and shoving one another. Dominance is established until one male exhibits the lateral display. In rare circumstances, sparring can result in both males being unable to free themselves from the other's horns, which can then result in the death of both animals. Rarely will a herd reach a size of forty individuals, partly because of the selective nature of their diet which would make foraging for food difficult in large groups. 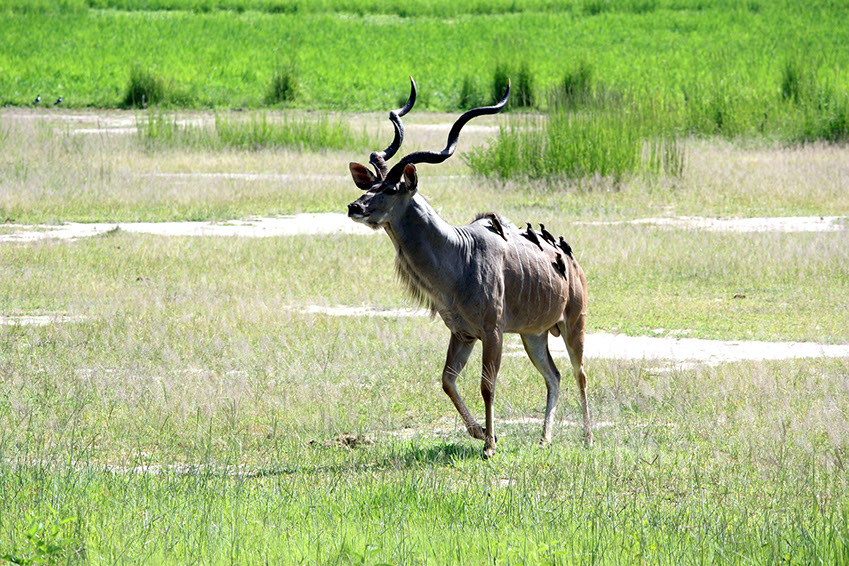 What do Kudu eat?

Kudus are browsers and eat leaves and shoots. In dry seasons they eat wild watermelons and other fruit for their liquid content and the natural sugars that they provide. The lesser kudu is less dependent on water sources than the greater kudu. Their diet consists of leaves, grass, shoots and occasionally tubers, roots and fruit (they are especially fond of oranges and tangerines).

These large animals are herbivores, which means they primarily eat plants. They are grazers, and feed on a variety of leaves, stems, buds, flowers, fruits, and more. Most of their diet comes from trees, but they also eat shrubs and small bushes. They eat fruit that has fallen off the tree, and pluck fruits right off the branch. Most of their foraging occurs in the early morning and late afternoon.