Maximum recording of a female living 14 years and 5 months in the wild and about 10 years for a males.

What is a Cheetah?

The cheetah (Acinonyx jubatus) is a large cat native to Africa. It is the fastest land animal, capable of running at 80 to 128 km/h (50 to 80 mph), and as such has several adaptations for speed, including a light build, long thin legs and a long tail. Cheetahs typically reach 67–94 cm (26–37 in) at the shoulder, and the head-and-body length is between 1.1 and 1.5 m (3.6 and 4.9 ft). Adults typically weigh between 20 and 65 kg (44 and 143 lb). Its head is small, rounded, and has a short snout and black tear-like facial streaks. The coat is typically tawny to creamy white or pale buff and is mostly covered with evenly spaced, solid black spots.

More gregarious than many other cats, the cheetah has three main social groups—females and their cubs, male 'coalitions' and solitary males. While females lead a nomadic life searching for prey in large home ranges, males are more sedentary and may instead establish much smaller territories in areas with plentiful prey and access to females. The cheetah is active mainly during the day and hunting is the major activity, with peaks during dawn and dusk. It feeds on small- to medium-sized prey weighing mostly below 40 kg (88 lb), and prefers medium-sized ungulates such as impala, springbok and Thomson's gazelles. The cheetah will typically stalk its prey to within 60–70 m (200–230 ft), charge towards it, trip it during the chase and bite its throat to suffocate it to death. Breeding occurs throughout the year; after a gestation of nearly three months a litter of typically three to five cubs is born; cheetah cubs are highly vulnerable to predation by other large carnivores such as hyenas and lions. Weaning happens at around four months, and cubs are independent by around 20 months of age. 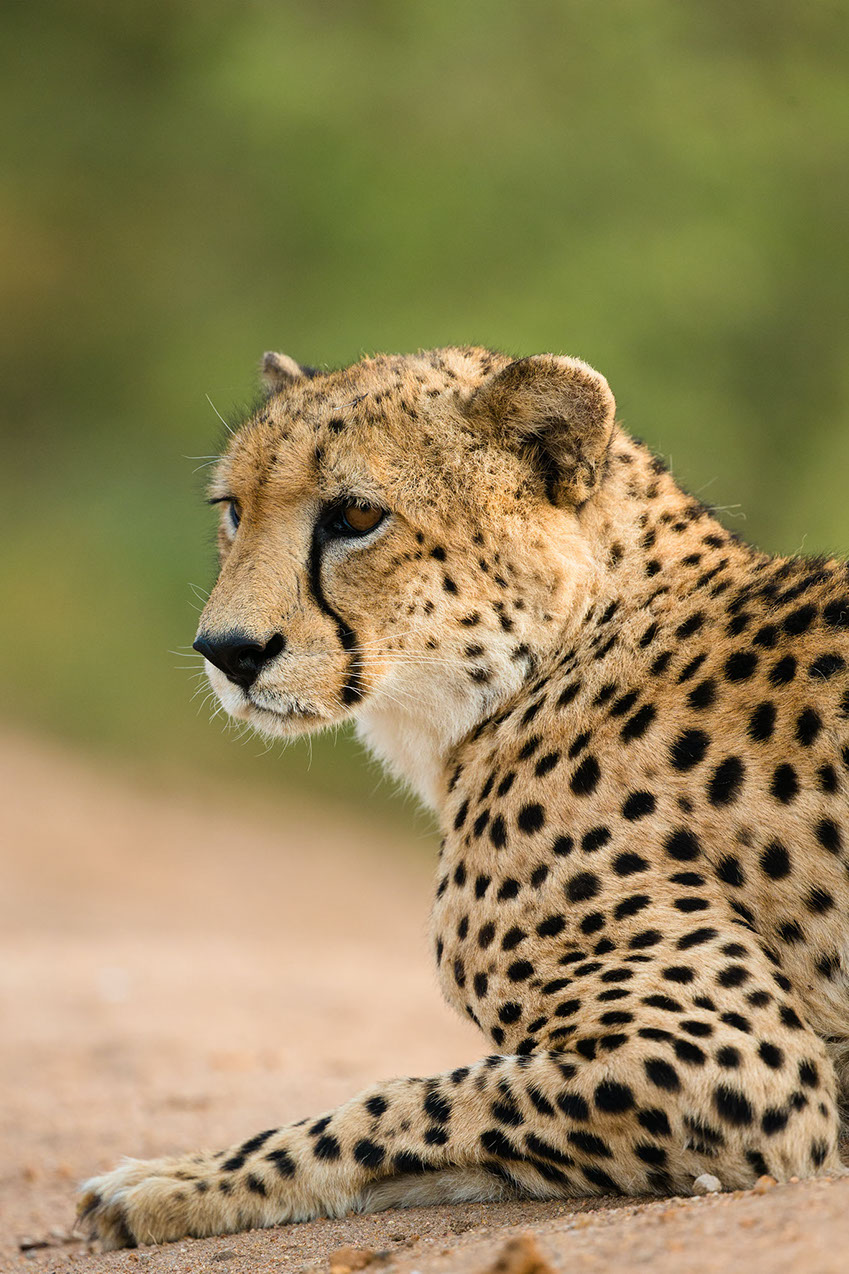 Where do Cheetah Live?

The species is distributed over eastern and southern Africa. Generally, the cheetahs occur in grasslands and savannas. However, they can be found in various habitats such mountainous areas or terrains with dense vegetation. In order to hide from predators, these animals prefer environment with lush vegetation such as tall grass or bushes.

Cheetahs in eastern and southern Africa occur mostly in savannas such as the Kalahari and Serengeti. In central, northern and western Africa cheetahs inhabit arid mountain ranges and valleys; in the harsh climate of the Sahara cheetahs prefer high mountains, which receive more rainfall than the surrounding desert.

The largest population (nearly 4,000 individuals) is sparsely distributed over Angola, Botswana, Mozambique, Namibia, South Africa and Zambia. Another population, spread in Kenya, Uganda and Tanzania, comprises 1,000 individuals. All other cheetahs occur in small, fragmented groups (mostly less than 100 individuals in each) throughout the range. Populations are feared to be declining, especially those of adults.

What are the Behaviours of Cheetah?

Unlike other large African predators such as lion or hyena, cheetah is most active during the day, thus avoiding competition for food with these animals. Home range of a cheetah can cover large territory, sometimes overlapping with that of another cheetah or a lion. Female cheetahs tend to roam across much larger home range than males. These cats are extremely sociable animals. Male cheetahs usually gather in small groups with their siblings while females tend to lead solitary life, gathering only when they nurse their cubs. The cheetahs are very shy and cautious, being able to hunt in the heat of the day and remain unnoticed.

Cheetahs take a wide variety of prey, predominantly small or medium antelope species such as Thomson’s gazelle and impala, but also larger species such as wildebeest and kudu. They also target ground-dwelling birds such as francolins and bustards and small mammals such as hares. Unlike many predators, cheetahs rarely scavenge.

Wild female cheetahs live to about 14 years and males to 10 years. Females have been recorded as starting to breed at two-years-old and to continue beyond 12-years-old. The cubs are born after a three-month gestation period and kept hidden away in a lair for the first two months of their lives. During this time, the mother will be out hunting and therefore absent from the lair during daylight hours.

Unlike most other cats, cheetahs do not ambush their prey or attack within springing distance. Prey may be spotted within seconds or stalked for hours. When the cheetah is within 70 to 100 m (230 to 330 ft.), the chase begins. A chase lasts perhaps 20 seconds, with few pursuits exceeding one minute. The distance covered averages 170 m (550 ft.), but some may continue pursuit for about 500 m (1,640 ft.). Rarely will a cheetah attempt an attack if more than 200 m (650 ft.) away from prey.

During a fast sprint all four paws of a cheetah do not touch the ground when the legs are fully contracted under the body and as the legs become fully extended. A single stride may cover 7 m (23 ft.) — the same distance as a much larger race horse in full stride. At near maximum acceleration, a cheetah runs about one stride per 0.28 seconds or 3.5 strides per second. 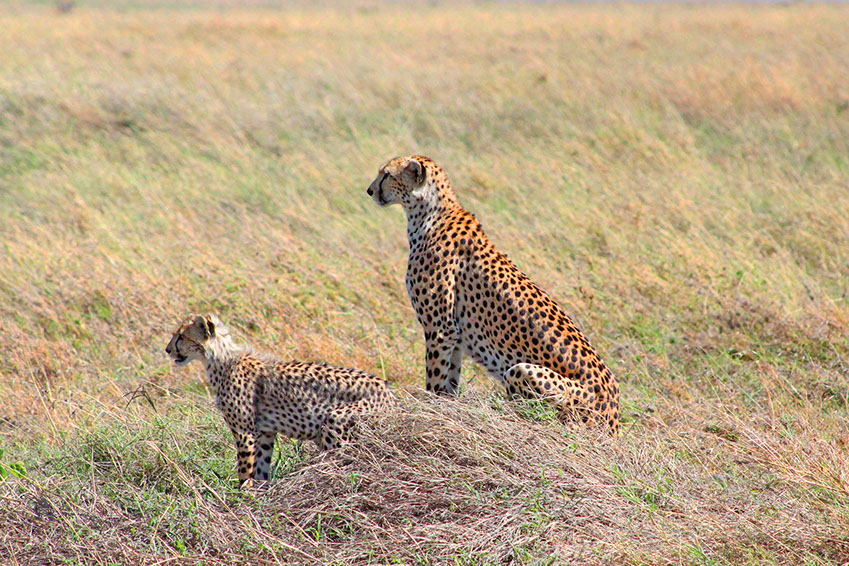 What do Cheetah eat?

Gazelles, impalas, other small- to medium-sized ungulates, plus calves of larger ungulate species are the primary diet of cheetahs. In addition, hares, small mammals, and birds may also be taken. 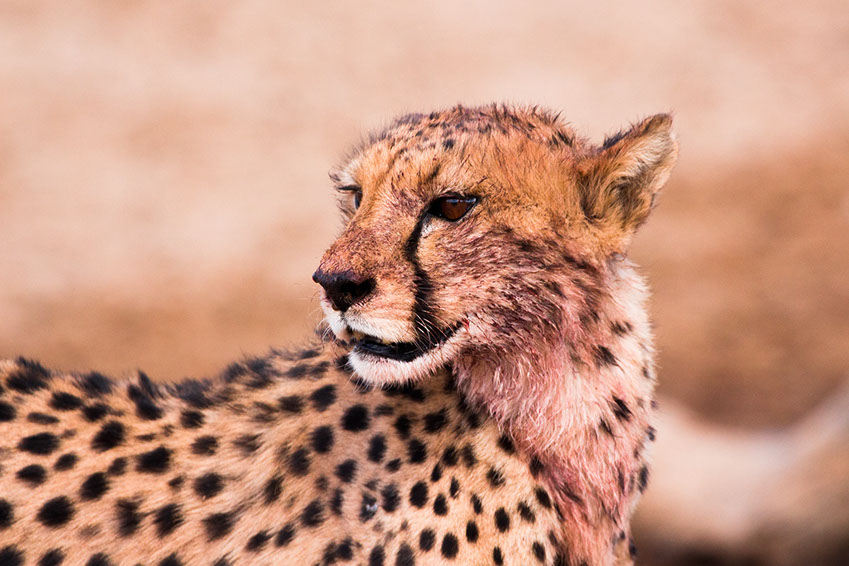