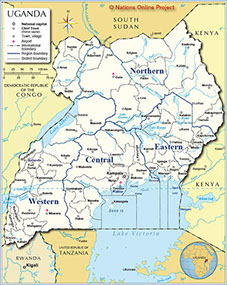 Uganda is a landlocked country in East-Central Africa. It is bordered to the east by Kenya, to the north by South Sudan, to the west by the Democratic Republic of the Congo, to the south-west by Rwanda, and to the south by Tanzania. The southern part of the country includes a substantial portion of Lake Victoria, shared with Kenya and Tanzania. Uganda is in the African Great Lakes region. Uganda also lies within the Nile basin, and has a varied but generally a modified equatorial climate.

Although generally equatorial, Uganda's climate is not uniform as it varies by altitude, proximity to Lake Victoria and rainfall. Southern Uganda is wetter with rain generally spread throughout the year. At Entebbe on the northern shore of Lake Victoria, most rain falls from the March to June and November to December period. Further to the north a dry season gradually emerges; at Gulu about 120 km from the South Sudanese border, November to February is much drier than the rest of the year.

Northeastern Uganda has the driest climate and is prone to droughts in some years. Rwenzori in the southwest on the border with DR Congo receives heavy rain all year round. The south of the country is heavily influenced by one of the world's biggest lakes, Lake Victoria, which contains many islands. It prevents temperatures from varying significantly and increases cloudiness and rainfall.

Uganda takes its name from the Buganda kingdom, which encompasses a large portion of the south of the country, including the capital Kampala. The people of Uganda were hunter-gatherers until 1,700 to 2,300 years ago, when Bantu-speaking populations migrated to the southern parts of the country.

Uganda is located on the East African Plateau, lying mostly between latitudes 4°N and 2°S (a small area is north of 4°), and longitudes 29° and 35°E. It averages about 1,100 metres (3,609 ft) above sea level, sloping very steadily downwards to the Sudanese Plain to the north. Some international trade organisations categorize Kenya as part of the Greater Horn of Africa. 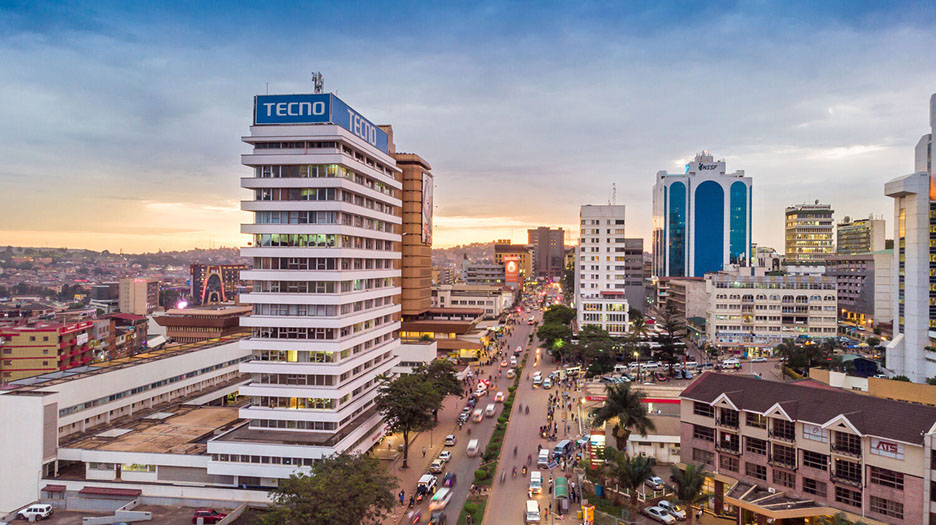 Evidence of humans living in what is now Uganda stretches back to at least 50,000 years ago, and possibly up to 100,000 years ago, based on stone tools recovered in the area. These people were hunter-gatherers. Between 1,700 and 2,300 years ago, Bantu-speaking populations migrated from central and western Africa to the southern parts of Uganda. The Empire of Kitara in the fourteenth and fifteenth centuries was the earliest forms of formal political organization, which was followed by the Bunyoro-Kitara kingdom, and in later centuries, Buganda and Ankole.

Arab traders moved inland from the Indian Ocean coast of East Africa in the 1830s and were the first to bring Islam to the country. They were followed in the 1860s by British explorers searching for the source of the Nile. Protestant missionaries entered Uganda in 1877 and were followed by Catholic missionaries in 1879. The United Kingdom placed the area under the charter of the British East Africa Company in 1888, and ruled it as a protectorate from 1894. As several other territories and chiefdoms were integrated, the final protectorate called Uganda took shape in 1914. From 1900 to 1920, a sleeping sickness epidemic killed more than 250,000 people.

Uganda achieved independence from Britain in 1962, with the first elections held on 1 March 1961. Benedicto Kiwanuka of the Democratic Party became the first Chief Minister. Uganda became a republic the following year, maintaining its Commonwealth membership. In succeeding years, supporters of a centralized state vied with those in favour of a loose federation and a strong role for tribally-based local kingdoms.

Ugandan visas are issued on arrival or online at visas.immigration.go.ug or at embassies and High Commissions. The Uganda Visa Policy uses the principle of reciprocity, that is all countries that require visas for Ugandans are visa prone in Uganda. You can get a free one-month visa extension at immigration offices in Kampala, Fort Portal, Jinja and Mbarara. However, you can not get a visa extension on a 90-day East African tourist visa, but only on a 90-day single entry Uganda visa.

English is widely spoken, though to varying degrees of fluency. British English is used by the most educated, but Ugandan English often takes on a life of its own. Dozens of African languages are spoken in Uganda, the most common being Luganda, which is almost universally understood in Kampala. Swahili may come in handy in places, especially the North and East. Although many Ugandans do not speak Swahili at all, it is a common trade language that has become another lingua franca in the East African region. The official languages are English and Swahili, although "any other language may be used as a medium of instruction in schools or other educational institutions or for legislative, administrative or judicial purposes as may be prescribed by law." Luganda, a central language, is widely spoken across the country, and several other languages are also spoken, including Acholi, Runyoro, Runyankole, Rukiga, Luo and Lusoga. 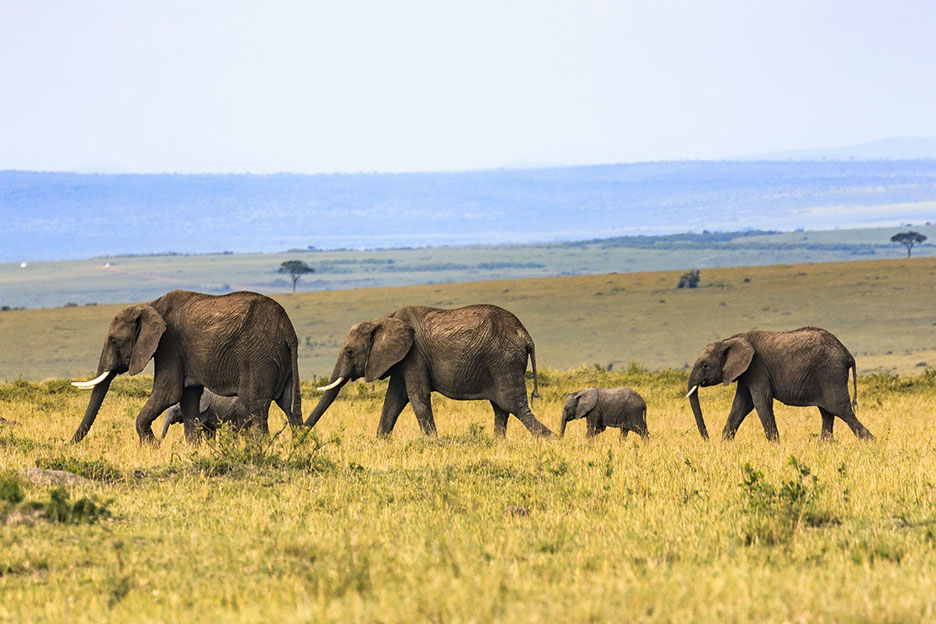 Uganda does not lack for accessible travel highlights. Dubbed by Winston Churchill as the Pearl of Africa, Uganda is celebrated for its beautiful nature and its hospitable people. Still one of the poorest countries in the world, and still recovering from some very dark years, Uganda is nowadays an accessible country to visit and experience sub-Saharan Africa in its full capacity. Tourism is growing, yet still authentic, and Uganda does not lack in tourist facilities. Though, it is not the place to go for great architecture or an abundance of urban sights, instead, its riches lie in its amazing variety of wildlife, landscapes and culture. With half of the remaining mountain gorillas and all of the Big Five living in the countries stunning national parks, wildlife watching is by far the main attraction.

With wide, dry Savannah in the north, thick rainforest in the centre and lush, snow-peaked mountain landscapes in the east, natural beauty comes in many ways here. Unesco listed Rwenzori Mountains National Park is home to the tallest mountain range of the continent, covered in thick jungle on the lower slopes and frozen moorlands on higher ones. Several of its highest peaks are covered year round in snow and glaciers. The highest mountain is Mt. Stanley, third highest in Africa. Head to the gorgeous Lake Bunyonyi and rise early to see the morning fog draw out. Watch fishermen at work from the shores of the Victoria Lake, the largest lake in Africa; the white beaches of Kalangala make for an excellent spot. Also on Lake Victoria are the Ssese Islands, great for some beach time.

Bwindi Impenetrable National Park, also listed as a UNESCO World Heritage site, is a unique safari spot in the world. The Bwindi population of 340 wild mountain gorillas, half of the total remaining number of this critically endangered primate, is a major draw. The park is home to a total of 10 primate species and some 110 other mammal species (including African elephants), over 350 bird species and some 200 butterflies, and 220 tree species, the dense forests here are one of the most divers ecosystems in Africa. The most accessible and therefore also most popular safari spot is Queen Elizabeth National Park, with dozens of large animals commonly seen. Of particular interest is the population of tree climbing lions living here, lion behaviour seen only here and in Tanzania. Your best chance of seeing the wide variety of wildlife in this area comes with an early morning visit to the plains around the Kazinga channel, which attracts animals of all kinds year round.

Uganda's urban life has a limited number of attractions to offer, but the twin cities of Kampala and Entebbe do make for an interesting stop. Just some 35 km apart, these two towns are remarkably different in character. The only true city in Uganda, Kampala is safer and less chaotic than most of its African counterparts, and the Kasubi Tombs (while damaged) and National Museum are worthwhile sights. Much smaller and prettier is the former capital, Entebbe. Its lovely location on the shores of Lake Victoria and the lush National Botanical Gardens make this a pleasant place to stay if you're flying in or out.

There are many accommodation options in Uganda; from higher end hotels and accommodation, Standard traveller Guest houses, Lodges and Inns with simple rooms with shared bathrooms