The African Wild Dog in Africa

What is an African Wild Dog?

The African wild dog is a canine native to sub-Saharan Africa. It is the largest indigenous canine in Africa, and the only extant member of the genus Lycaon, which is distinguished from Canis by dentition highly specialised for a hypercarnivorous diet, and a lack of dewclaws. The African wild dog is a highly social animal, living in packs with separate dominance hierarchies for males and females. Uniquely among social carnivores, the females rather than the males disperse from the natal pack once sexually mature. The young are allowed to feed first on carcasses. The species is a specialised diurnal hunter of antelopes, which it catches by chasing them to exhaustion. Like other canids, the African wild dog regurgitates food for its young, but this action is also extended to adults, to the point of being central to their social life. The English language has several names for the African wild dog, including African hunting dog, Cape hunting dog, painted hunting dog, painted dog, painted wolf, and painted lycaon. Some conservation organisations are promoting the name 'painted wolf' as a way of rebranding the species, as wild dog has several negative connotations that could be detrimental to its image. Nevertheless, the name "African wild dog" is still widely used.

The African wild dog exhibits one of the most varied coat colours among the mammals. Individuals differ in patterns and colours, indicating a diversity of the underlying genes. The purpose of these coat patterns may be an adaptation for communication, concealment, or temperature regulation. The African wild dog possesses the most specialized adaptations among the canids for coat colour, diet, and for pursuing its prey through its cursorial (running) ability. It possesses a graceful skeleton, and the loss of the first digit on its forefeet increases its stride and speed. This adaptation allows it to pursue prey across open plains for long distances. The teeth are generally carnassial-shaped, and its premolars are the largest relative to body size of any living carnivoran except for the spotted hyena. On the lower carnassials (first lower molars), the talonid has evolved to become a cutting blade for flesh-slicing, with a reduction or loss of the post-carnassial molars. 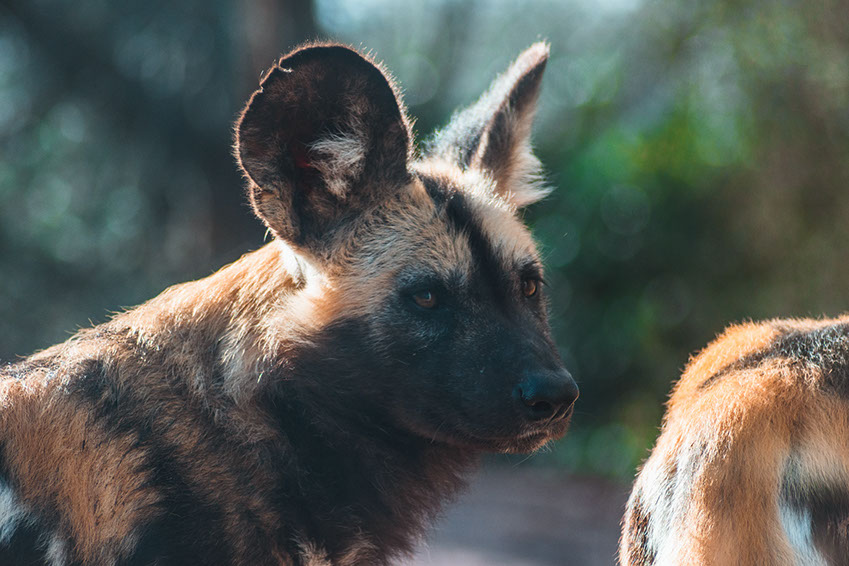 Where do African Wild Dogs Live?

The African wild dog is mostly found in Savannah and arid zones, generally avoiding forested areas. This preference is likely linked to the animal's hunting habits, which require open areas that do not obstruct vision or impede pursuit. Nevertheless, it will travel through scrub, woodland and montane areas in pursuit of prey. Forest-dwelling populations of African wild dogs have been identified, including one in the Harenna Forest, a wet montane forest up to 2400 m in altitude in the Bale Mountains of Ethiopia. At least one record exists of a pack being sighted on the summit of Mount Kilimanjaro. In Zimbabwe, the species has been recorded at altitudes of 1,800 m. The African Wild Dog is also found across East-Africa (Uganda, Kenya, Tanzania) and in the Southern parts of Africa, in South Africa, Namibia, Botswana and other surrounding Countries 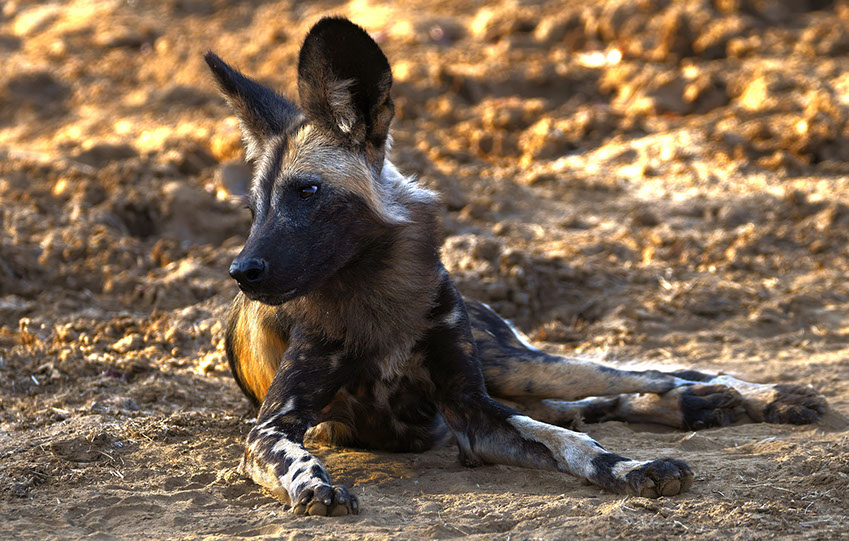 What are the Behaviours of African Wild Dogs?

The African wild dog is the bulkiest and most solidly built of African canids. The fur of the African wild dog differs significantly from that of other canids, consisting entirely of stiff bristle-hairs with no underfur. It gradually loses its fur as it ages, with older individuals being almost naked. Colour variation is extreme, and may serve in visual identification, as African wild dogs can recognise each other at distances of 50–100 m.

The African wild dog has very strong social bonds, stronger than those of sympatric lions and spotted hyenas; thus, solitary living and hunting are extremely rare in the species. It lives in permanent packs consisting of two to 27 adults and yearling pups. The typical pack size in Kruger National Park and the Maasai Mara is four or five adults, while packs in Moremi and Selous contain eight or nine. However, larger packs have been observed and temporary aggregations of hundreds of individuals may have gathered in response to the seasonal migration of vast springbok herds in Southern Africa. Males and females have separate dominance hierarchies, with the latter usually being led by the oldest female. Males may be led by the oldest male, but these can be supplanted by younger specimens; thus, some packs may contain elderly former male pack leaders.

African wild dog populations in East Africa appear to have no fixed breeding season, whereas those in Southern Africa usually breed during the April–July period. During estrus, the female is closely accompanied by a single male, which keeps other members of the same sex at bay. The gestation period lasts 69–73 days, with the interval between each pregnancy being 12–14 months typically. The African wild dog produces more pups than any other canid, with litters containing around six to 16 pups, with an average of 10, thus indicating that a single female can produce enough young to form a new pack every year.

Packs of African wild dogs have a high ratio of males to females. This is a consequence of the males mostly staying with the pack whilst female offspring disperse and is supported by a changing sex-ration in consecutive litters. Those born to maiden bitches contain a higher proportion of males, second litters are half and half and subsequent litters biased towards females with this trend increasing as females get older.

The African wild dog is a specialised pack hunter of common medium-sized antelopes. It and the cheetah are the only primarily diurnal African large predators. The African wild dogs have a higher success rate when it comes to killing prey even though they are smaller than lions and leopards. Hunting strategies of the African wild dog differ depending on prey species, with wildebeest being rushed at to panic the herd and isolate a vulnerable individual, whereas territorial antelope species, which defend themselves by running in wide circles, are captured by cutting off their escape routes. 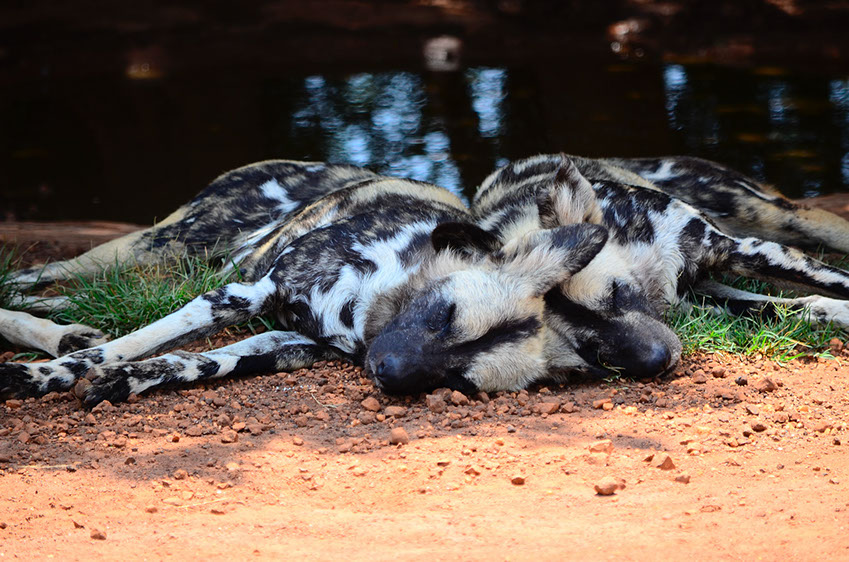 What do African Wild Dogs eat?

The African Wild Dog prey  are mainly five wildlife species, namely the greater kudu, Thomson's gazelle, impala, bushbuck and blue wildebeest. More specifically, in East Africa, its most common prey is Thomson's gazelle, while in Central and Southern Africa, it targets impala, reedbuck, kob, lechwe and springbok. Its diet is not restricted to these animals, though, as it also hunts warthog, oribi, duiker, waterbuck, Grant's gazelle, ostrich, calves of African buffalo and smaller prey such as dik-dik, hares, spring hares, insects and cane rats. 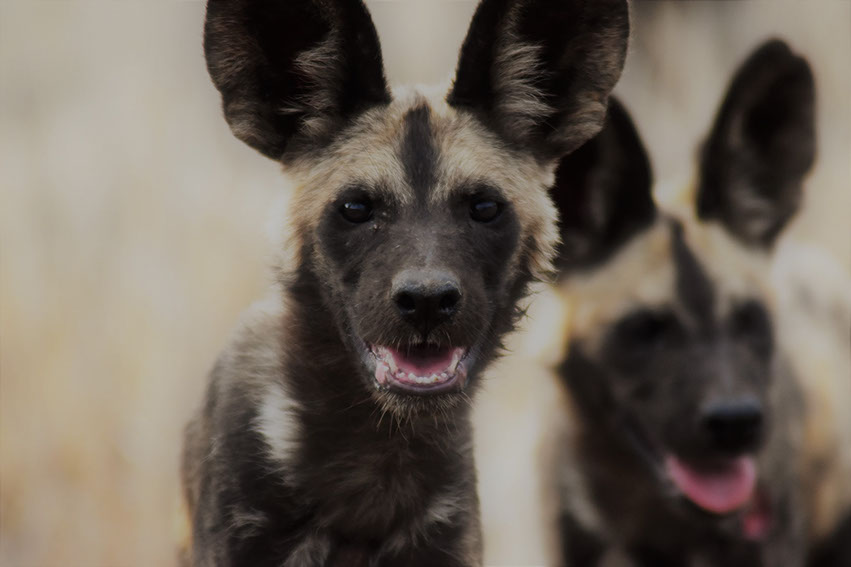 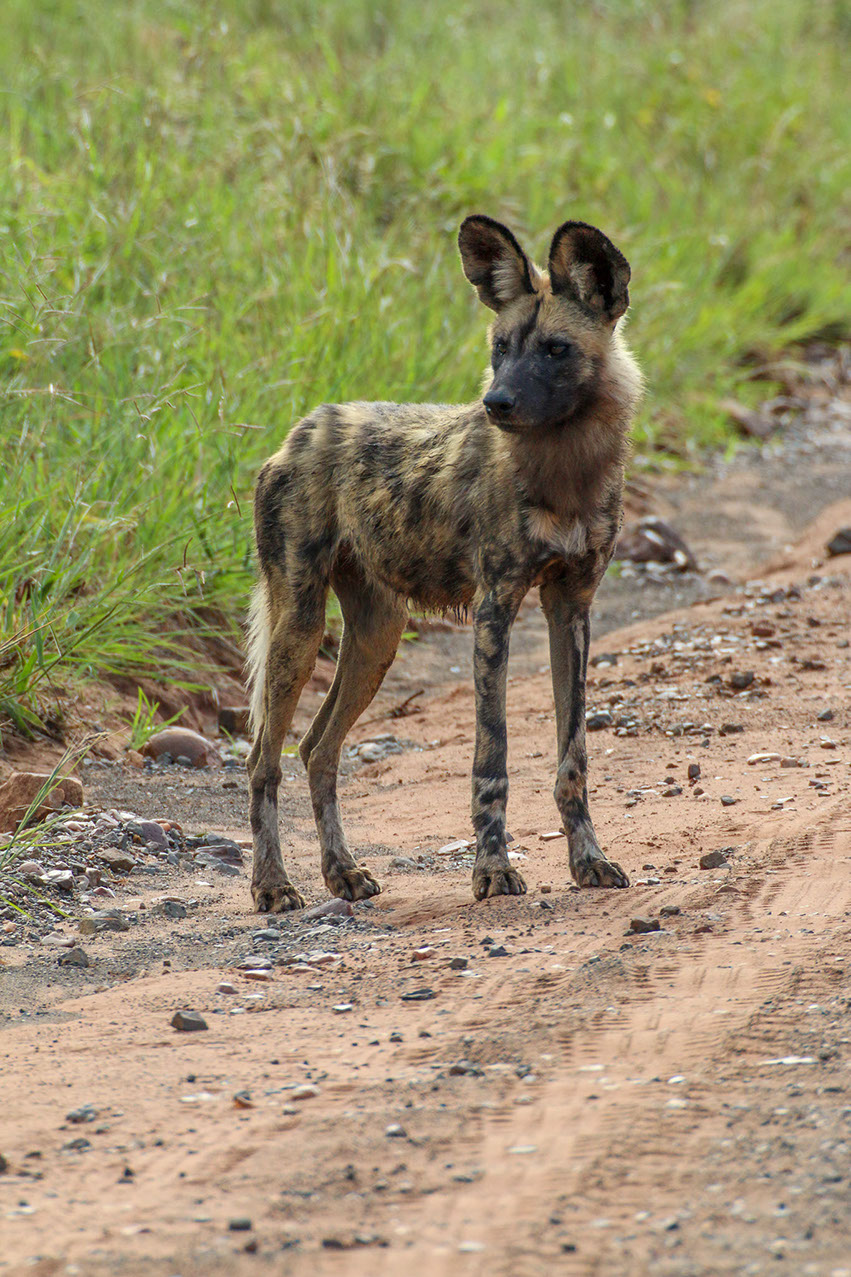