Visit Tanzania, a must visit destination, the great migration destination, a place with 20 percent of the species of Africa’s large mammal wildlife population

Tanzania, officially the United Republic of Tanzania is a country in East Africa within the African Great Lakes region. It borders Uganda to the north; Kenya to the northeast; Comoro Islands and the Indian Ocean to the east; Mozambique and Malawi to the south; Zambia to the southwest; and Rwanda, Burundi, and the Democratic Republic of the Congo to the west. Mount Kilimanjaro, Africa's highest mountain, is in northeastern Tanzania.

Many important hominid fossils have been found in Tanzania, such as 6-million-year-old Pliocene hominid fossils. The genus Australopithecus ranged all over Africa 4 to 2 million years ago; and the oldest remains of the genus Homo are found near Lake Olduvai. Following the rise of Homo erectus 1.8 million years ago, humanity spread all over the Old World, and later in the New World and Australia under the species Homo sapiens. Homo sapiens also overtook Africa and absorbed the older archaic species and subspecies of humanity. One of the oldest known ethnic groups still existing, the Hadzabe, appears to have originated in Tanzania, and their oral history recalls ancestors who were tall and were the first to use fire, medicine, and lived in caves, much like Homo erectus or Homo heidelbergensis who lived in the same region before them. 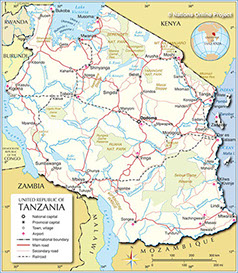 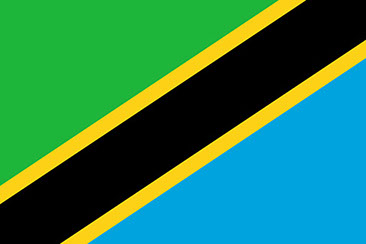 At 947,303 square kilometres (365,756 sq mi), Tanzania is the 13th largest country in Africa and the 31st largest in the world, ranked between the larger Egypt and smaller Nigeria. It borders Kenya and Uganda to the north; Rwanda, Burundi, and the Democratic Republic of the Congo to the west; and Zambia, Malawi, and Mozambique to the south. Tanzania is located on the eastern coast of Africa and has an Indian Ocean coastline approximately 1,424 kilometres (885 mi) long. It also incorporates several offshore islands, including Unguja (Zanzibar), Pemba, and Mafia. The country is the site of Africa's highest and lowest points: Mount Kilimanjaro, at 5,895 metres (19,341 ft) above sea level, and the floor of Lake Tanganyika, at 1,471 metres (4,826 ft) below sea level, respectively

According to the 2012 census, the total population was 44,928,923. The under-15 age group represented 44.1 percent of the population. The population distribution in Tanzania is uneven. Most people live on the northern border or the eastern coast, with much of the remainder of the country being sparsely populated. Density varies from 12 per square kilometre (31/sq mi) in the Katavi Region to 3,133 per square kilometre (8,110/sq mi) in the Dar es Salaam Region.

Tanzania contains some 20 percent of the species of Africa’s large mammal population, found across its reserves, conservation areas, marine parks, and 17 national parks, spread over an area of more than 42,000 square kilometres (16,000 sq mi) and forming approximately 38 percent of the country's territory.

Approximately 38 percent of Tanzania's land area is set aside in protected areas for conservation. Tanzania has 16 national parks, plus a variety of game and forest reserves, including the Ngorongoro Conservation Area. In western Tanzania, Gombe Stream National Park is the site of Jane Goodall's ongoing study of chimpanzee behaviour, which started in 1960.

Tanzania is highly biodiverse and contains a wide variety of animal habitats. On Tanzania's Serengeti plain, white-bearded wildebeest, other bovids and zebra participate in a large-scale annual migration.  Serengeti National Park, the country's second largest national park area at 14,763 square kilometres (5,700 sq mi), is located in northern Tanzania and is famous for its extensive migratory herds of wildebeests and zebra while also having the reputation as one of the great natural wonders of the world.