Visit Kenya, Africa's Maasai land, a must visit destination with the world's best game reserves for tourism & travel, one of the finest Wildlife and Nature. The East African country of Kenya is a pearl in sub-Saharan Africa, from the scenic sandy beaches at the coast, to the Nairobi National Park (the only one in a capital city in the world), to the majestic Rift Valley, the bird life in Lake Naivasha, the hot boiling springs of Lake Baringo, Lake Turkana and Lake Victoria, Kenya is a very beautiful country with lots of wildlife and scenic features, and is one of the major economic hubs in Africa. 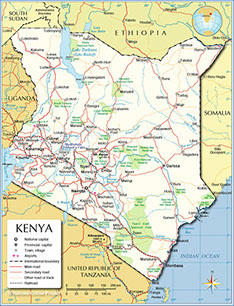 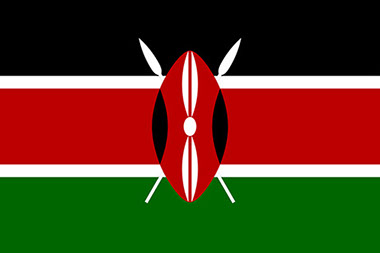 Kenya, officially the Republic of Kenya, is a country in Africa with 47 semiautonomous counties governed by elected governors. At 580,367 square kilometres (224,081 sq mi), Kenya is the world's 48th largest country by total area. With a population of more than 47.6 million people, Kenya is the 29th most populous country. Kenya's capital and largest city is Nairobi, while its oldest city and first capital is the coastal city of Mombasa. Kisumu City is the third largest city and also an inland port on Lake Victoria. Other important urban centres include Nakuru and Eldoret. Kenya is bordered by South Sudan to the northwest, Ethiopia to the north, Somalia to the east, Uganda to the west, Tanzania to the south, and the Indian Ocean to the southeast. According to archaeological dating of associated artifacts and skeletal material, the Cushites first settled in the lowlands of Kenya between 3,200 and 1,300 BC, a phase referred to as the Lowland Savannah Pastoral Neolithic.

Kenya is one of Africa's most visited countries by tourists, and rightfully so, it boasts a diversity of attractions and a well-developed hospitality and tourism sector that most of its neighbours envy. The relative ease of travel, the abundance of tour operators, pleasant year-round climate, natural sights and friendly people all contribute to its relative popularity by African standards. Although made up of many diverse ethnic groups and tribes, Kenyans have a strong sense of national pride. This may be due in part to their unity in the struggle for Uhuru (Kiswahili: "freedom") independence from British colonial rule, achieved in 1963. While Kenyans can spot ethnic differences among themselves quite easily, to most foreigners these will not be distinguishable. Outsiders on the whole tend to find Kenyans to be relaxed, hospitable, and joyous.

Kenya experiences a wide range of tropical climates. It is hot and humid at the coast, temperate inland, and very dry in the north and northeast. It receives a great deal of sunshine all year round and summer clothes are worn throughout the year. However, it is usually cool at night and early in the morning. Nairobi is at high altitude and can be quite cold, even during the day, between June and August. The long rain season is from April to June, and the short rain season October to December. Rain is sometimes heavy and often falls in the afternoons and evenings. The hottest period is February to March, and the coldest July to August.

Game viewing is best in the dry seasons, which are from mid-June to October, and from late-December to mid-March. The annual animal migration - especially migration of the wildebeest - occurs between June and September, with millions of animals taking part. It has been a popular event for film-makers to capture.

Notable peoples include the Swahili on the coast, pastoralist communities in the north, farmers in central and western and fishermen around the Lake Victoria basin. The Maasai culture is well known to tourists, despite their being a minor percentage of the Kenyan population. They are renowned for their elaborate upper body adornment and jewellery. 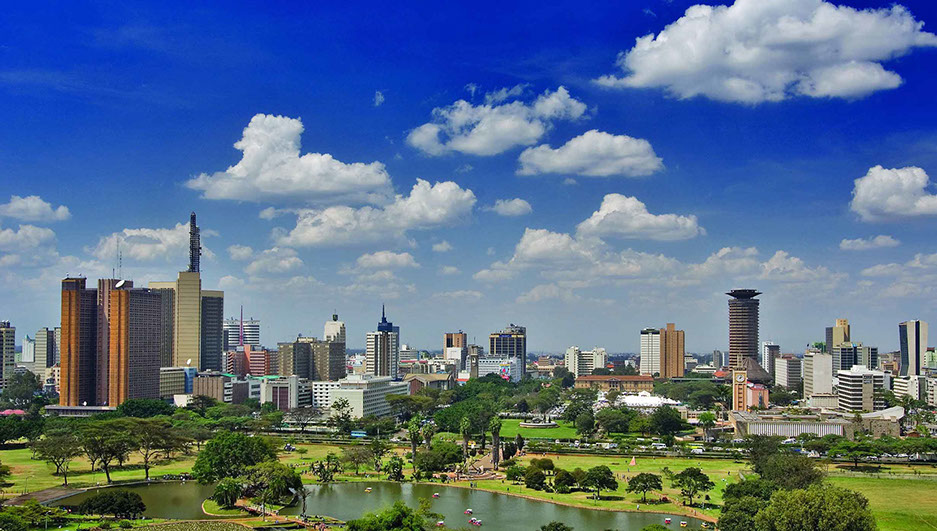 Kenya has been inhabited by people since the beginnings of humanity's existence as a species.

The Santo Mathias bastion and the main entrance to Fort Jesus, Mombasa

Arab traders began frequenting the coast of Kenya around the 1st century. Kenya's proximity to the Arabian peninsula invited colonisation, and Arab and Persian settlements spread along the coast in the 8th century. Throughout the centuries, Kenya has played host to many different merchants and explorers (Arabs, Chinese, Portuguese, et al.) Coastal Kenya formed part of the Swahili Coast, which comprised of numerous wealthy city-states that engaged in trade across the Indian Ocean and Sahara Desert, one of the most prominent being the city of Mombasa.

Kenya became part of the British Empire in the late 19th century. In the 1950s, a brutal war took place between independence fighters called the Mau Mau and the British, with horrendous abuses of human rights on both sides. Kenyan nationalist Jomo Kenyatta was arrested in 1952 and with little evidence, tried and imprisoned for supposed management of the Mau Mau Society, eventually being detained for almost 9 years. Considered a national hero, he led the country after it declared independence on 12 December 1963. Through popularity, moderation and shrewd power politics, the Founding Father turned the country into a de facto dictatorship (whether benevolent or malevolent depends on who you talk to).

English and Swahili are the two official languages. As a diverse country with over 40 ethnic groups and 60 languages between them, most Kenyans are multilingual, speaking their native ethnic language along with Swahili, which is the preferred language for interethnic communication. Most people, particularly in urban areas, also have a working knowledge of English, though this will vary depending on their level of education. 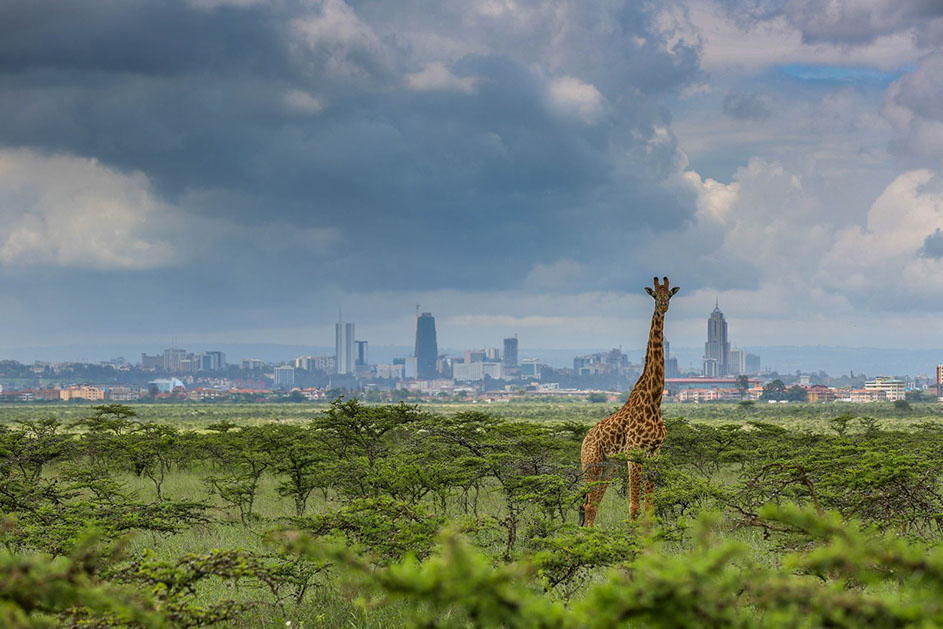 Kenya has some of the world's best game reserves where you can go for a safari, and see some of the finest African flora and fauna. The parks are famous for lions, giraffes, elephants and huge herds of zebras, wildebeests and buffaloes. The annual wildebeest migration (from Maasai Mara to the Serengeti) is an awesome sight and best experienced in a balloon safari. Bookings to watch the migration are best done months in advance due to the high demand and limited lodging available in the Mara. Migration is during August and September. Kenya also is a great destination for beach holidays, with several located along the coastal regions and the city of Mombasa, especially Diani Beach. Other coastal towns worth visiting include Lamu and Malindi.

Kenya is also becoming a golf holiday destination, thanks to the many beautiful lush courses around the major urban areas including some which have hosted international Golf tournaments such as Muthaiga and Karen Golf Courses. The northern parts of Kenya are home to some spectacular tribes living very traditional lifestyles - you can start to encounter these remarkable societies near to and around the main road north into Ethiopia (the A2 which runs through Marsabit and into Moyale at the Ethopian border), as well as west of this in places such as Wamba, Maralal, Baragoi, Korr, Kargi, and South Horr. 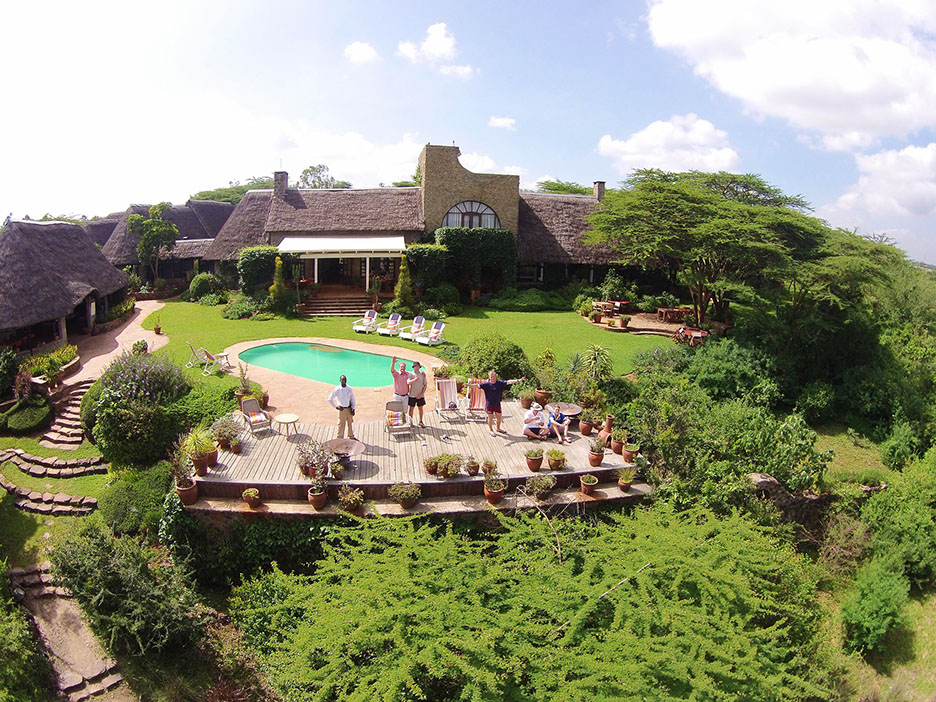 Nairobi has a wide variety of tourist hotels, from backpackers hostels to five-star establishments such as the Norfolk Hotel. There are a number of other guesthouses that offer private rooms both with shared bathrooms and self-contained rooms. Homestays are increasingly gaining popularity. Part of the reason is that one can experience Kenyan culture in a deeper and more meaningful way.