What is a Hyena?

Hyenas or hyaenas are feliform carnivoran mammals of the family Hyaenidae. With only four extant species (in three genera), it is the fifth-smallest biological family in the Carnivora, and one of the smallest in the class Mammalia. Despite their low diversity, hyenas are unique and vital components of most African ecosystems.

Although phylogenetically they are closer to felines and viverrids, and belong to the feliform category, hyenas are behaviourally and morphologically similar to canines in several elements of convergent evolution; both hyenas and canines are non-arboreal, cursorial hunters that catch prey with their teeth rather than claws. Both eat food quickly and may store it, and their calloused feet with large, blunt, nonretractable claws are adapted for running and making sharp turns. However, the hyenas' grooming, scent marking, defecating habits, mating and parental behaviour are consistent with the behaviour of other feliforms

Spotted hyenas may kill as many as 95% of the animals they eat, while striped hyenas are largely scavengers. Generally, hyenas are known to drive off larger predators, like lions, from their kills, despite having a reputation in popular culture for being cowardly. Hyenas are primarily nocturnal animals, but sometimes venture from their lairs in the early-morning hours. With the exception of the highly social spotted hyena, hyenas are generally not gregarious animals, though they may live in family groups and congregate at kills.

Hyenas have relatively short torsos and are fairly massive and wolf-like in build, but have lower hind quarters, high withers and their backs slope noticeably downward toward their rumps. The forelegs are high, while the hind legs are very short and their necks are thick and short. Their skulls superficially resemble those of large canids, but are much larger and heavier, with shorter facial portions. Hyenas are digitigrade, with the fore and hind paws having four digits each and sporting bulging pawpads.

Like canids, hyenas have short, blunt, non-retractable claws. Their pelage is sparse and coarse with poorly developed or absent underfur. Most species have a rich mane of long hair running from the withers or from the head. With the exception of the spotted hyena, hyaenids have striped coats, which they likely inherited from their viverrid ancestors. Their ears are large and have simple basal ridges and no marginal bursa. Their vertebral column, including the cervical region are of limited mobility. Hyenas have no baculum. Hyenas have one more pair of ribs than canids do, and their tongues are rough like those of felids and viverrids. Males in most hyena species are larger than females, though the spotted hyena is exceptional, as it is the female of the species that outweighs and dominates the male. Also, unlike other hyenas, the female spotted hyena's external genitalia closely resembles that of the male. 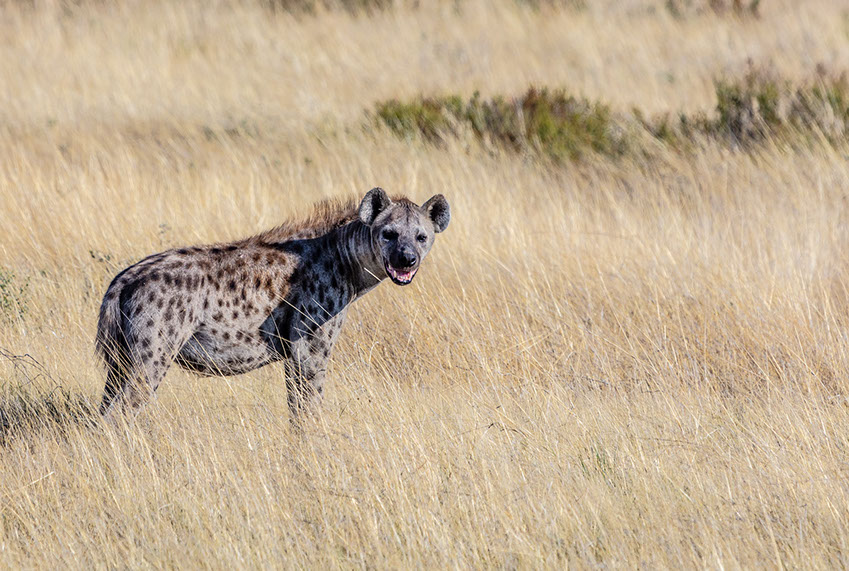 Where do Hyena Live?

Spotted hyenas are more widespread than striped hyenas. They are found in dry acacia bushland, open plains and rocky country where there is abundant wildlife. They are not common to heavily wooded country or forests, and can live at high altitudes up to 13,200 feet. In Africa, the striped hyena is out-competed by the spotted hyena in open areas, and is thus relegated to other habitats. Striped hyenas are found in dry, mountainous areas with scrub woodlands, making their dens in crags and ravines. In some regions, they live in open Savannah with dense grassland. They have even been found in desert areas where water is not available for many miles.

Historically, the spotted hyena was widespread throughout Sub-Saharan Africa. It is present in all habitats save for the most extreme desert conditions, tropical rainforests and the top of alpine mountains. Its current distribution is patchy in many places, especially in West Africa. Populations are concentrated in protected areas and surrounding land. There is a continuous distribution over large areas of Ethiopia, Uganda, Kenya, Tanzania, Botswana, Namibia and the Transvaal Lowveld areas of South Africa. During the 1770s and 1780s the species was still widespread in southern and western South Africa, being recorded i.a. on the Cape Peninsula and Cape Flats, and near present-day Somerset West, Riviersonderend, Mossel Bay, George, Joubertina, Gamtoos River, Jansenville, Cannon Rocks, Alice, Onseepkans and Augrabies Falls

What are the Behaviours of Hyena?

Hyenas groom themselves often like felids and viverrids, and their way of licking their genitals is very cat-like (sitting on the lower back, legs spread with one leg pointing vertically upward). However, unlike other feliforms, they do not "wash" their faces. They defecate in the same manner as other Carnivora, though they never raise their legs as canids do when urinating, as urination serves no territorial function for them. Instead, hyenas mark their territories using their anal glands, a trait found also in viverrids and mustelids, but not canids and felids. When attacked by lions or dogs, striped[6] and brown hyenas will feign death, though the spotted hyena will defend itself ferociously. The spotted hyena is very vocal, producing a number of different sounds consisting of whoops, grunts, groans, lows, giggles, yells, growls, laughs and whines. The striped hyena is comparatively silent, its vocalisations being limited to a chattering laugh and howling.

The spotted hyena is a very vocal species; the characteristic “whoop whoop” howl can be heard throughout the African night. When fighting, they issue a hoarse “ahh ahh” sound. When excited, the hyena’s uneven, pitched howl is eerily reminiscent of the laughter of a demented soul. Vocal communication is not highly developed within the striped hyena species. It consists mainly of soft growls used during encounters. The striped hyena is generally considered a solitary creature and is rarely seen in groups; however, it does have some social organization. It typically forages individually, but can occasionally be observed congregating at a kill. This species may also associate with a small family during the breeding season and at the den. Both parents will help to rear the young, and a family unit may be formed once young are mobile. Adolescent family members will assist with feeding their younger siblings by carrying food back to the den.

What do Hyena eat?

Wildebeest are the most commonly taken medium-sized ungulate prey item in both Ngorongoro and the Serengeti, with zebra and Thomson's gazelles coming close behind. Cape buffalo are rarely attacked due to differences in habitat preference, though adult bulls have been recorded to be taken on occasion. In Kruger National Park, blue wildebeest, cape buffalo, Burchell's zebra, greater kudu and impala are the spotted hyena's most important prey, while giraffe, impala, wildebeest and zebra are its major food sources in the nearby Timbavati area. Springbok and kudu are the main prey in Namibia's Etosha National Park

Spotted hyenas have also been found to catch fish, tortoises, humans, black rhino, hippo calves, young African elephants, pangolins and pythons. There is at least one record of four hyenas killing an adult or subadult hippopotamus in Kruger National Park. Spotted hyenas may consume leather articles such as boots and belts around campsites 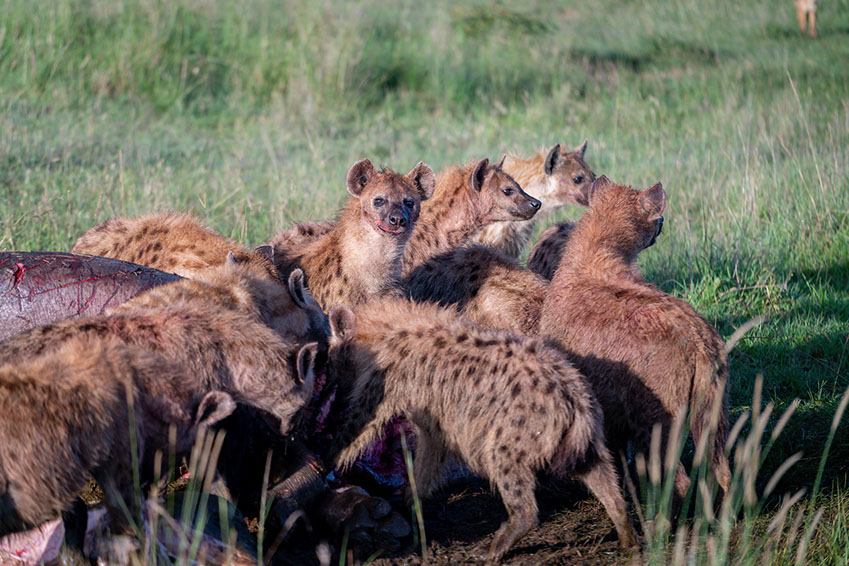