Mgahinga Gorilla National Park is Uganda's top golden monkey, gorilla tracking complete tour destination, with beautiful volcano sceneries, culture and Wildlife. Mgahinga Gorilla National Park sits high in the clouds, at an altitude of between 2,227m and 4,127m. As its name suggests, it was created to protect the rare mountain gorillas that inhabit its dense forests, and it is also an important habitat for the endangered golden monkey.

As well as being important for wildlife, the park also has a huge cultural significance, in particular for the indigenous Batwa pygmies. This tribe of hunter-gatherers was the forest’s “first people”, and their ancient knowledge of its secrets remains unrivalled. Mgahinga’s most striking features are its three conical, extinct volcanoes, part of the spectacular Virunga Range that lies along the border region of Uganda, Congo and Rwanda. Mgahinga forms part of the much larger Virunga Conservation Area which includes adjacent parks in these countries. The volcanoes’ slopes contain various ecosystems and are biologically diverse, and their peaks provide a striking backdrop to this gorgeous scenery.

Mgahinga Gorilla National Park is a national park in southwestern Uganda. It was created in 1991 and covers an area of 33.9 km2 (13.1 sq mi). Mgahinga Gorilla National Park was established in 1991 in an area that used to be a game reserve between the 1930s and 1950, but was partly converted to crop fields in lower altitudes. Biological surveys were initiated in 1989, wire traps destroyed, rangers trained and trees planted. Settlers were relocated to areas outside the national park's borders in the early 1990s.

Mgahinga Park has great biological importance because throughout the climatic changes of the Pleistocene ice ages, mountains such as these provided a refuge for mountain plants and animals, which moved up or down the slopes as climate became warmer or cooler. The Virungas are home to a large variety of wildlife, including about half the world’s critically endangered mountain gorillas

Mgahinga Gorilla National Park is located in the Virunga Mountains and encompasses three inactive volcanoes, namely Mount Muhabura, Mount Gahinga, and Mount Sabyinyo. In altitude the national park ranges from 2,227 to 4,127 m (7,306 to 13,540 ft) and is part of the Nile River watershed area. It is contiguous with Rwanda's Volcanoes National Park and the southern sector of Virunga National Park in the Democratic Republic of the Congo. The park is about 15 kilometres (9.3 mi) by road south of the town of Kisoro and approximately 55 kilometres (34 mi) by road west of Kabale, the largest city in the sub-region

The area experiences two wet rainy seasons: February to May; and September to December. The average monthly rainfall varies from 250 mm (9.8 in) in October to 10 mm (0.39 in) in July.

Mgahinga Gorilla national park is a habitat for man's closest, the mountain gorillas which roam about the whole forest in search for food. This park is one of the few places in the world where the endangered mountain gorillas live and it attracts people from different countries to come on Uganda Gorilla Safari. There is no doubt that Mgahinga Gorilla national park is one of the leading tourism sites in Uganda since it harbors these rare primates.

The Virungas are a chain of eight volcanoes which dot the borders of Uganda, the Democratic Republic of the Congo and Rwanda. Three of the conical peaks are in Uganda’s Mgahinga Gorilla National Park:

Mgahinga National Park offers the chance to track the golden monkeys (Ceropithecus Kandti) sometimes referred to as a distinctive race of the more widespread blue monkey, a little known bamboo-associated taxa primate listed as ‘endangered’ by the World Conservation Union. Endemic to the Albertine Rift, the golden monkey is characterized as a bright orange-gold body, cheeks and tail, contrasting with its black limbs, crown and tail end.

The Visitor Centre at Ntebeko is the starting point for nature walks, volcanoes hiking, golden monkey and gorilla tracking and the short (4km) Batwa Trail. The trailhead of the long Batwa trail is at the base of Mt Muhavura. Exhibits inside the building explore themes relating the Virunga environment. A trail along the stone Buffalo Wall – built to keep animals out of neighboring farmland – provides good birding and views of the volcanoes

There are lots of things to do in Mgahinga Gorilla National Park. From gorilla tracking, Volcano Hiking, Golden Monkey tracking, Cultural Walks. Mgahinga is such a place where you can engage in several adventure activities.

Mgahinga is home to the habituated Nyakagezi gorilla group - a fairly nomadic bunch that have been known to cross the border into Rwanda and the Congo. The family includes the lead silverback Bugingo who is around 50 years old and father to most of the group; his silverback sons, Mark and Marfia; and two blackbacks, Rukundo and Ndungutse, who love to pose and play in the trees. The two females, Nshuti and Nyiramwiza, both have babies Furraha and Nkanda respectively.

The endangered golden monkey is endemic to the Albertine Rift, and Mgahinga Gorilla National Park offers a rare chance to track these striking creatures, high in the dense bamboo forests on the Gahinga trail. There is an estimated 3000-4000 individuals in the Virunga area which 42-60 are habituated in Mgahinga.

Mgahinga is home to 76 species of mammals, although they are difficult to glimpse in the wild forest vegetation. They include giant forest hogs, bush pigs, forest buffaloes, elephants, bushbucks, golden cats, side striped jackals, black fronted duikers and South African porcupines.

Mgahinga Gorilla national park has also got amazing accommodation options for you to stay.

Bunyonyi: Where to stay

Kisoro: Where to stay 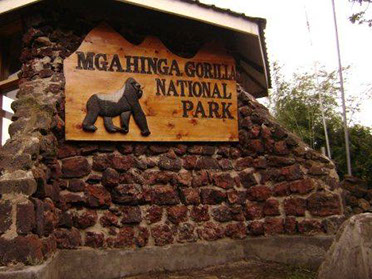 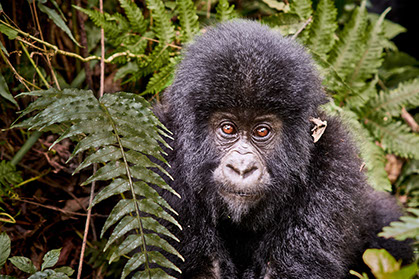 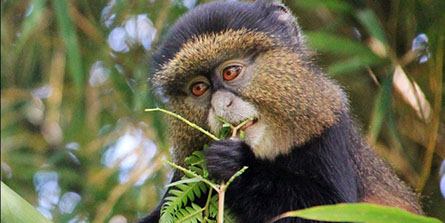 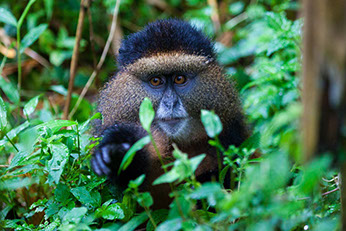