Unknown but estimated to be up to 50 years

What is a Chimpanzee?

The chimpanzee also known as the common chimpanzee, robust chimpanzee, or simply "chimp", is a species of great ape native to the forest and Savannah of tropical Africa. It has four confirmed subspecies and a fifth proposed subspecies. The chimpanzee and the closely related bonobo (sometimes called the "pygmy chimpanzee") are classified in the genus Pan. Evidence from fossils and DNA sequencing shows that Pan is a sister taxon to the human lineage and is humans' closest living relative.

Chimpanzees are large primates with long black hairs that cover their bodies sparely, exception for their palms, their faces, and the soles of their two feet. The parts of their bodies that are hairless are coloured light to dark brown, depending on the individual's age. They have large ears and over their eyes is a heavy brow-ridge. Chimpanzees have good sight and can see in colour. Their fingers are long and they have an opposable big toe. With arms longer than their legs, chimpanzees are able to get about on all fours, known as knuckle-walking. They have 32 teeth, very similar to human teeth.

The chimpanzee is more robustly built than the bonobo but less than the gorilla. The arms of a chimp are longer than its legs, and can reach below the knees. The hands have long fingers with short thumbs and flat fingernails. The feet are adapted for grasping, the big toe being opposable. The pelvis is long with an extended ilium. A chimp's head is rounded with a prominent and prognathous face and a pronounced brow ridge. It has forward-facing eyes, a small nose, rounded non-lobed ears, a long mobile upper lip and, in adult males, sharp canine teeth. Chimps lack the prominent sagittal crest and associated head and neck musculature of gorillas.

Chimpanzee bodies are covered by coarse hair, except for the face, fingers, toes, palms of the hands, and soles of the feet. Chimps lose more hair as they age, and develop bald spots. The hair of a chimp is typically black but can be brown or ginger. As they get older, white or grey patches may appear, particularly on the chin and lower region.

Chimpanzees, as predators, may have a role in controlling the populations of their prey. They have a large impact on the red colobus monkey, bush pigs and baboons by predating them. Chimpanzees may help with the dispersal of seeds of certain plants, through transportation, or by eating the fruit. 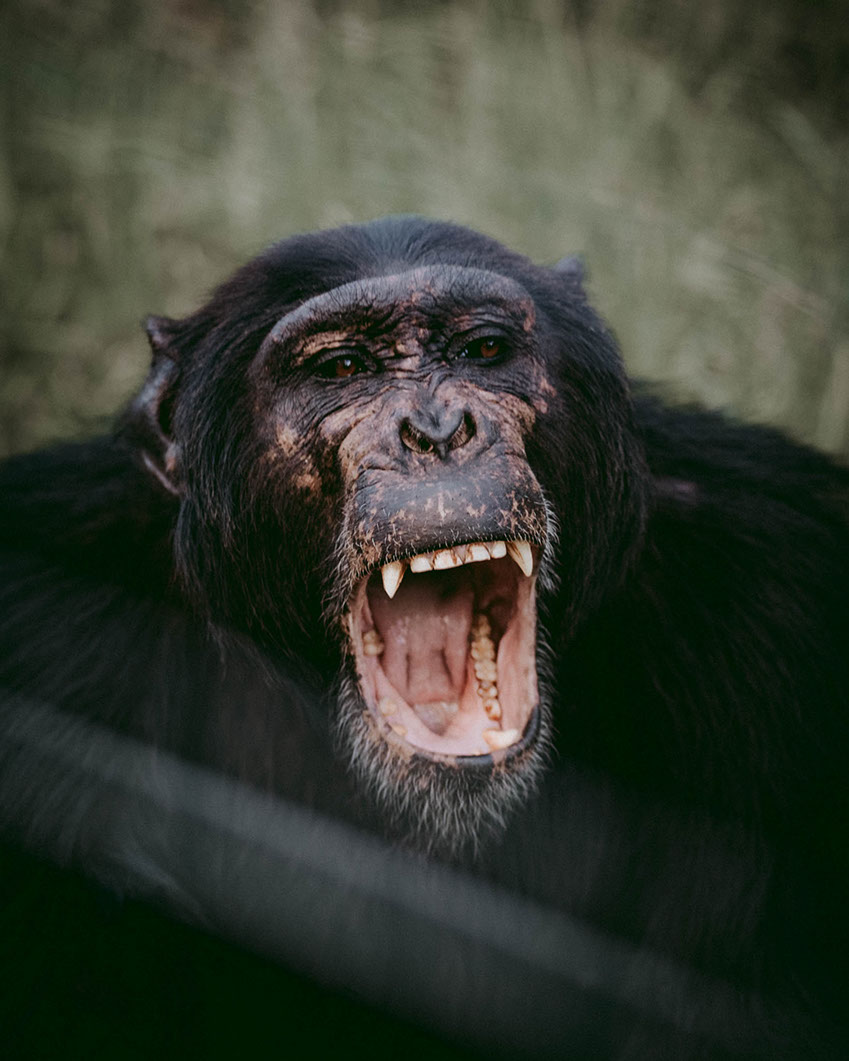 Where do Chimpanzees Live? 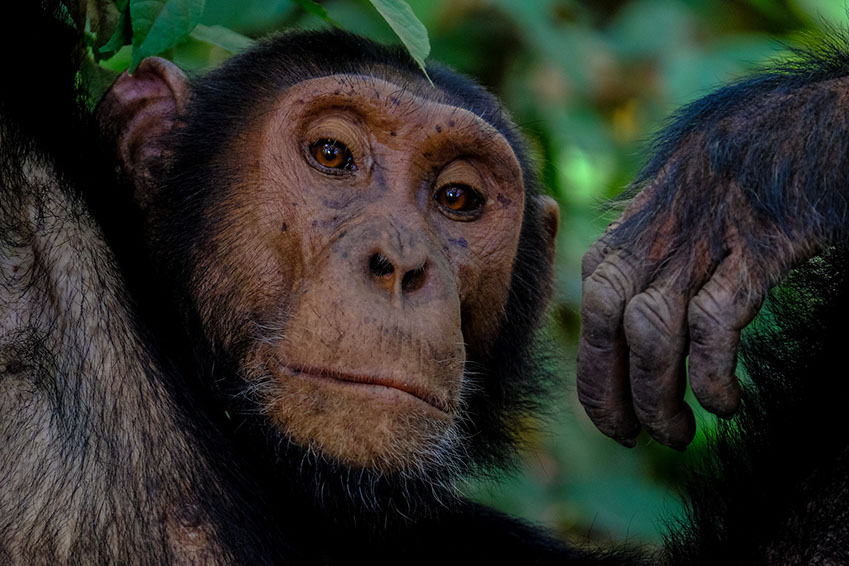 What are the Behaviours of Chimpanzees?

Chimpanzees are very sociable animals, active during daylight hours, and spending their time feeding, grooming and playing with the members of their group. The size of a group can range from 15 to 120, depending on the habitat and how much food is available. They are very territorial with no tolerance for outsiders, and can even kill an individual from another group. At night chimpanzees make nests in trees by bending branches to construct a safe platform where they can sleep, building a new nest each day. Although a lot of time is spent sleeping and eating up in the trees, usually they travel on the ground along a network of path, balancing on their knuckles.

At the core of social structures are males, which roam around, protect group members, and search for food. Males remain in their natal communities, while females generally emigrate at adolescence. As such, males in a community are more likely to be related to one another than females are to each other. Among males there is generally a dominance hierarchy, and males are dominant over females. However, this unusual fission-fusion social structure, "in which portions of the parent group may on a regular basis separate from and then rejoin the rest," is highly variable in terms of which particular individual chimpanzees congregate at a given time. This is caused mainly by the large measure of individual autonomy that individuals have within their fission-fusion social groups.

Chimpanzees have been described as highly territorial and will kill other chimps.

Chimpanzees mate throughout the year, although the number of females in oestrus varies seasonally in a group. Female chimps are more likely to come into oestrus when food is readily available. Oestrous females exhibit sexual swellings. Chimps are promiscuous; during oestrus, females mate with several males in their community, while males have large testicles for sperm competition. Other forms of mating also exist. A community's dominant males sometimes restrict reproductive access to females. A male and female can form a consortship and mate outside their community.

Care for the young is provided mostly by their mothers. The survival and emotional health of the young is dependent on maternal care. Mothers provide their young with food, warmth, and protection, and teach them certain skills. In addition, a chimp's future rank may be dependent on its mother's status. Newborn chimps are helpless; their grasping reflex is not strong enough to support them for more than a few seconds. For their first 30 days, infants cling to their mother's bellies. Infants are unable to support their own weight for their first two months and need their mothers' support. When they reach five to six months, infants ride on their mothers' backs. They remain in continual contact for the rest of their first year. When they reach two years of age, they are able to move and sit independently, and start moving beyond the arms reach of their mothers. By four to six years, chimps are weaned and infancy ends. 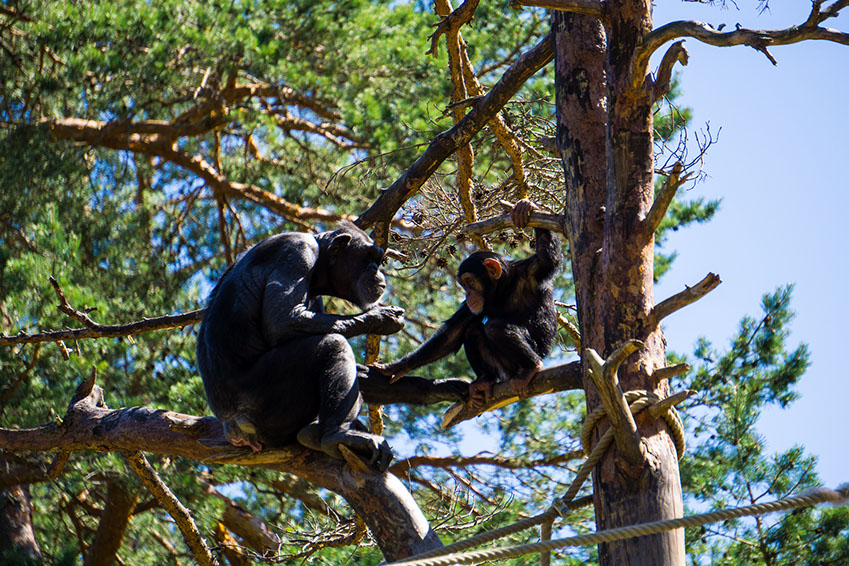 What do Chimpanzees eat?

The chimpanzee is omnivorous and eats a huge variety of food. The main part of their diet consists of fruits, flowers and seeds picked from trees. They also eat insects such as termites and ants, extracted from their nests by means of a stick. They also use chewed leaves to soak up water like a sponge, drinking the water from the leaf.

Despite the fact that common chimpanzees are known to hunt, and to collect insects and other invertebrates, such food actually makes up a very small portion of their diet, from as little as 2% yearly to as much as 65 grams of animal flesh per day for each adult chimpanzee in peak hunting seasons. This also varies from troop to troop and year to year. However, in all cases, the majority of their diet consists of fruits, leaves, roots, and other plant matter.