What is an Ostrich?

The common ostrich or simply ostrich, is a species of large flightless bird native to certain large areas of Africa. It is one of two extant species of ostriches, the only living members of the genus Struthio in the ratite order of birds. The other is the Somali ostrich, which was recognized as a distinct species by BirdLife International in 2014 having been previously considered a very distinctive subspecies of ostrich.

The feathers of adult males are mostly black, with white primaries and a white tail. However, the tail of one subspecies is buff. Females and young males are greyish-brown and white. The head and neck of both male and female ostriches is nearly bare, with a thin layer of down. The skin of the female's neck and thighs is pinkish grey, while the male's is grey or pink dependent on subspecies. The long neck and legs keep their head up to 2.8 m (9 ft) above the ground, and their eyes are said to be the largest of any land vertebrate: 50 mm (2.0 in) in diameter; helping them to see predators at a great distance. The eyes are shaded from sunlight from above.

Their skin varies in colour depending on the subspecies, with some having light or dark grey skin and others having pinkish or even reddish skin. The strong legs of the common ostrich are unfeathered and show bare skin, with the tarsus (the lowest upright part of the leg) being covered in scales: red in the male, black in the female. The tarsus of the common ostrich is the largest of any living bird, measuring 39 to 53 cm (15 to 21 in) in length. The bird has just two toes on each foot (most birds have four), with the nail on the larger, inner toe resembling a hoof. The outer toe has no nail. The reduced number of toes is an adaptation that appears to aid in running, useful for getting away from predators. 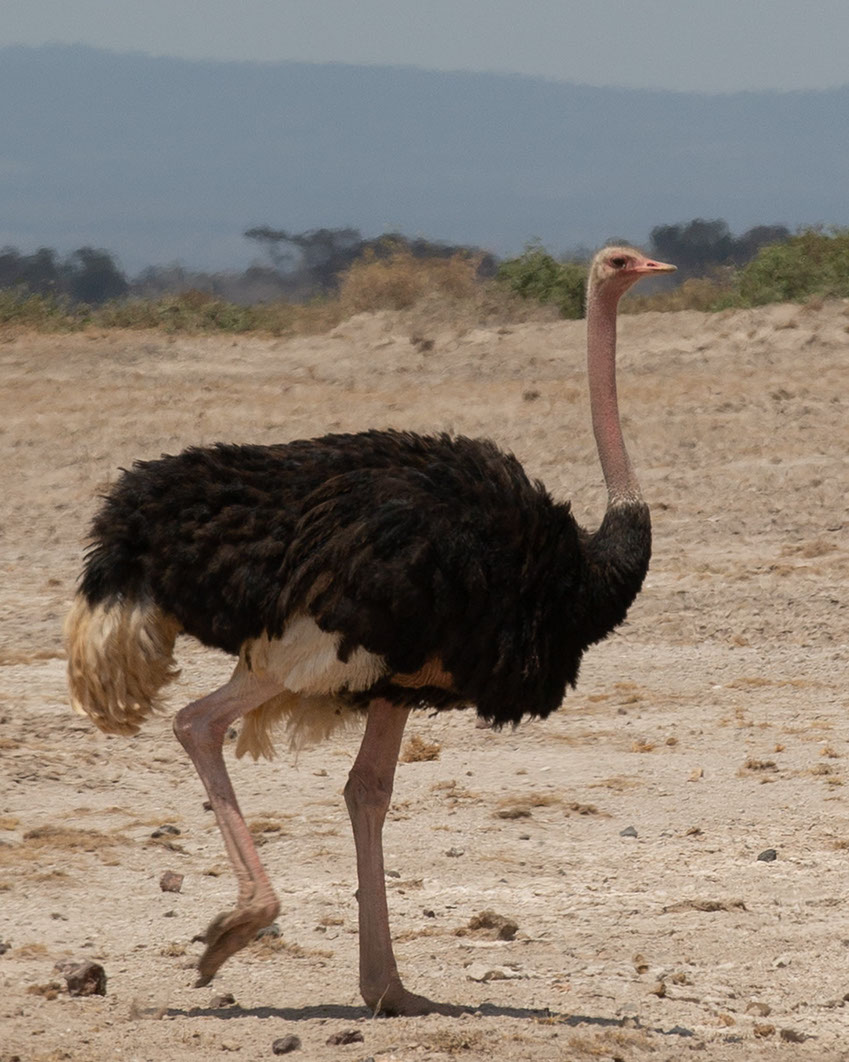 Where do Ostrich Live? 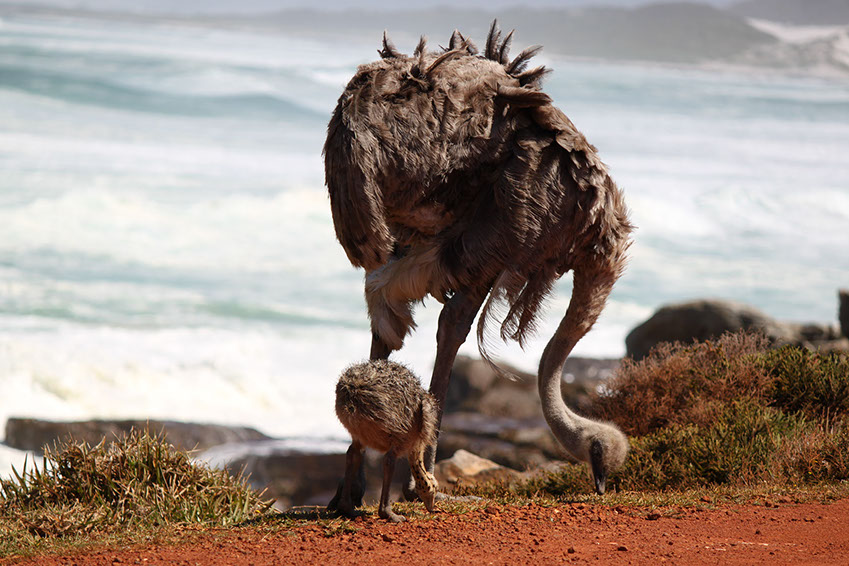 What are the Behaviours of Ostrich?

Ostriches live in flocks numbering 5 to 50, and are normally found alongside grazing animals such as antelope and zebras. During the breeding season, of about 5 months, flocks will occupy territories extending 2-15 sq km. Outside the breeding season, smaller, looser flocks of 2-5 members form. Ostriches have a lifestyle which is nomadic and mostly diurnal, being active early in the day as well as late. Males are territorial, defending their territory aggressively. These birds like water and frequently take baths, if given the opportunity, and are good swimmers. Sometimes, to escape detection, they lie down with their necks outstretched, which probably was the origin of the myth that an ostrich buries its head in the sand. They use posture to threaten a rival or predator, fluffing up the feathers of their wings and hissing loudly. These birds are fast runners and usually will comfortably outrun their predators. Ostriches are very vocal, and their sounds include whistling, booming, snorting and hissing.

Ostriches are polygynous, each male having three to five hens, with a “major” hen and several “minor” hens. Dominant males defend their territory and mate with their major hen and other hens within the area. The major hen is given more careful consideration, getting first choice of nesting ground. She lays her eggs first, then allows the others in the flock to produce theirs. The major hen will know which are her eggs and protects her clutch by pushing away other hens’ eggs. The mating season starts in March or April, running until September. The male will scrape out a nest, which is just a depression in the ground, then attracts the hens by dancing, fluffing up his feathers and flapping his wings, as well as swinging his head while going down on his knees. Females lay 2 to 11 creamy eggs in the communal nest. Only dominant male and major female guard the nest. The eggs are incubated for about 6 weeks. The female is on the nest during daylight hours, and the male at night. Within the first three days the chicks leave the nest. They fledge when they are 4 to 5 months old, and by about 18 months they are fully grown, reaching maturity at 2 to 4 years.

With their acute eyesight and hearing, common ostriches can sense predators such as lions from far away. When being pursued by a predator, they have been known to reach speeds in excess of 70 km/h (43 mph), and can maintain a steady speed of 50 km/h (31 mph), which makes the common ostrich the world's fastest two-legged animal. When lying down and hiding from predators, the birds lay their heads and necks flat on the ground, making them appear like a mound of earth from a distance, aided by the heat haze in their hot, dry habitat. When threatened, common ostriches run away, but they can cause serious injury and death with kicks from their powerful legs. Their legs can only kick forward. 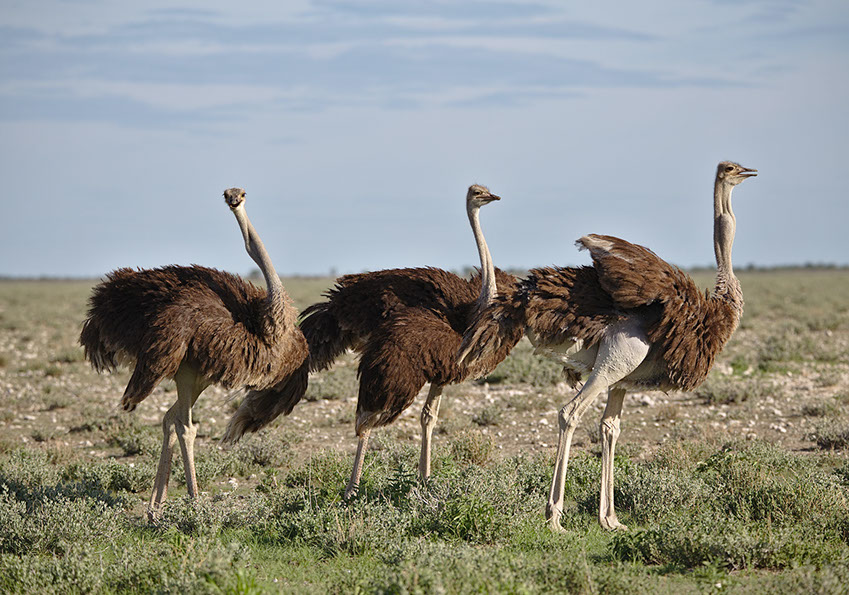 What do Ostrich eat?

Ostriches mainly feed on seeds, shrubs, grass, fruit and flowers; occasionally they also eat insects such as locusts. Lacking teeth, they swallow pebbles that act as gastroliths to grind food in the gizzard. When eating, they will fill their gullet with food, which is in turn passed down their esophagus in the form of a ball called a bolus. Common ostriches can go without drinking for several days, using metabolic water and moisture in ingested plants, but they enjoy liquid water and frequently take baths where it is available.