Morocco, also the Kingdom of Morocco, is a country and a top tourism destination located in the Maghreb region of North Africa. It overlooks the Mediterranean Sea to the north and the Atlantic Ocean to the west, and has land borders with Algeria to the east and the territory of Western Sahara to the south.  The capital is Rabat and the largest city is Casablanca.

The word "Morocco" is ultimately derived from the name of the city of Marrakesh, which was its capital under the Almoravid dynasty and the Almohad Caliphate. The origin of the name Marrakesh is disputed, but it most likely comes from the Berber words amur akush, meaning "Land of God"

Morocco is a kingdom in North Africa. Morocco has a rich heritage from the Islamic Golden Age and extensive desert. For Europeans, Morocco has been, and remains, the gateway to Africa.

Morocco, a destination with 34 million inhabitants is the perfect place in Africa to see varied cultural heritages including those with African, Arabic, Berber, Moorish and Western influences.

The official languages of Morocco are Arabic and Berber. However, the local Moroccan Arabic, a dialect of Maghrebi Arabic (spoken in Morocco, Tunisia and Algeria) is very divergent from standard Arabic, so even native Arabic speakers from outside the region would not understand the conversations of locals. French is widely understood in Morocco due to its history as a French protectorate, and is still taught in schools from relatively early grades, making it by far the most useful non-Arabic language to know.

Although you will find a few people who speak English among the most educated people. Some shop owners and hotel managers in urban centers also speak English. In general the preference in increasing order is for English, then Spanish, then French, then standard Arabic, and best of all Moroccan Arabic or Berber languages depending on the region. 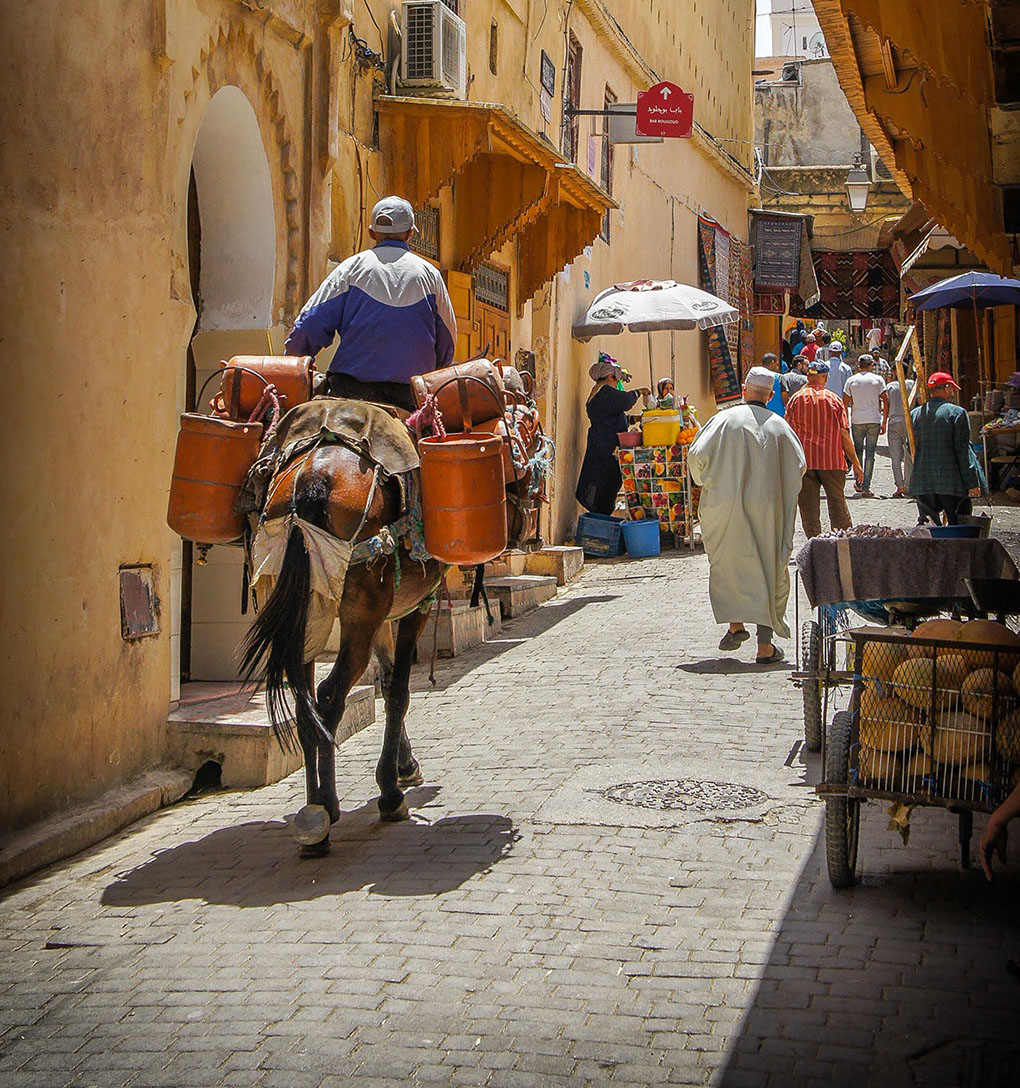 The earliest known independent state of Morocco was the Berber Kingdom of Mauretania under Bocchus I. This kingdom dates back to 110 BCE.

From the 1st century BCE, Morocco was part of the Roman Empire as Mauretania Tingitana. Christianity was introduced in the 2nd century CE and gained converts in the Roman towns, among slaves and Berber farmers.

In the 5th century CE as the Roman Empire declined, the region was invaded from the north by the Vandals and later the Visigoths. In the 6th century, northern Morocco became part of the Byzantine Empire. Throughout this time, however, the Berber inhabitants in the high mountains of the interior remained independent.

In 670 CE, the first Islamic conquest of the North African coastal plain took place under Uqba ibn Nafi, a general serving under the Umayyads. The indigenous Berber tribes adopted Islam, but retained their customary laws. They also paid taxes and tribute to the new Muslim administration. The first independent Muslim state in the area of modern Morocco was the Kingdom of Nekor, an emirate in the Rif Mountains. It was founded by Salih I ibn Mansur in 710, as a client state. After the outbreak of the Berber Revolt in 739, the Berbers formed other independent states such as the Miknasa of Sijilmasa and the Barghawata.

According to medieval legend, Idris Ibn Abdallah had fled to Morocco after the Abbasids' massacre of the tribes in Iraq. He convinced the Awraba tribes to break the allegiance to distant Abbasid caliphs in Baghdad and he founded the Idrisid Dynasty in 788. The Idrisids established Fez as their capital and Morocco became a centre of Muslim learning and major regional power. The Idrisids were ousted in 927 by the Fatimid Caliphate and their Miknasa allies. After Miknasa broke off relations with the Fatimids in 932, they were removed from power by the Maghrawa of Sijilmasa in 980. From the 11th century to the early 20th century onwards, a series of dynasties including the Almoravids, Almohads, Marinids, Wattasids, Saadis and Alaouites ruled Morocco until it was controlled by the Spanish and French.

During World War II, Morocco became an Axis puppet under Vichy France in 1940, and became a refuge for affluent Europeans, famous through the film Casablanca. Morocco was liberated in 1942 by American troops in Operation Torch (see World War II in Africa) and hosted the 1943 Casablanca conference.

Morocco's long struggle for independence from France ended in 1956. The internationalized city of Tangier was turned over to the new country that same year. Morocco annexed Western Sahara during the late 1970s, and even though the status of the territory remains unresolved, all maps in Morocco show Western Sahara as an integrated part of Morocco.

For tourists from countries that need a visa to enter Morocco, the Moroccan Embassy is usually the first port of call. Visas are usually valid for 3 months and take around 5-6 working days to process. Tourists can stay for up to 90 days.

Morocco has a coast by the Atlantic Ocean that reaches past the Strait of Gibraltar into the Mediterranean Sea. It is bordered by Spain to the north (a water border through the Strait and land borders with three small Spanish-controlled exclaves, Ceuta, Melilla, and Peñón de Vélez de la Gomera), Algeria to the east, and Western Sahara to the south. Since Morocco controls most of Western Sahara, its de facto southern boundary is with Mauritania.

The internationally recognised borders of the country lie between latitudes 27° and 36°N, and longitudes 1° and 14°W. Adding Western Sahara, Morocco lies mostly between 21° and 36°N, and 1° and 17°W (the Ras Nouadhibou peninsula is slightly south of 21° and west of 17°).

The geography of Morocco spans from the Atlantic Ocean, to mountainous areas, to the Sahara desert. Morocco is a Northern African country, bordering the North Atlantic Ocean and the Mediterranean Sea, between Algeria and the annexed Western Sahara. It is one of only three nations (along with Spain and France) to have both Atlantic and Mediterranean coastlines.

A large part of Morocco is mountainous. The Atlas Mountains are located mainly in the centre and the south of the country. The Rif Mountains are located in the north of the country. Both ranges are mainly inhabited by the Berber people. At 446,550 km2 (172,414 sq mi), Morocco excluding Western Sahara is the fifty-seventh largest country in the world. Algeria borders Morocco to the east and southeast, though the border between the two countries has been closed since 1994.

The Rif mountains stretch over the region bordering the Mediterranean from the north-west to the north-east. The Atlas Mountains run down the backbone of the country, from the northeast to the southwest. Most of the southeast portion of the country is in the Sahara Desert and as such is generally sparsely populated and unproductive economically. Most of the population lives to the north of these mountains, while to the south lies the Western Sahara, a former Spanish colony that was annexed by Morocco in 1975 (see Green March). Morocco claims that the Western Sahara is part of its territory and refers to that as its Southern Provinces.

Morocco's capital city is Rabat; its largest city is its main port, Casablanca. Other cities recording a population over 500,000 in the 2014 Moroccan census are Fes, Marrakesh, Meknes, Salé and Tangier 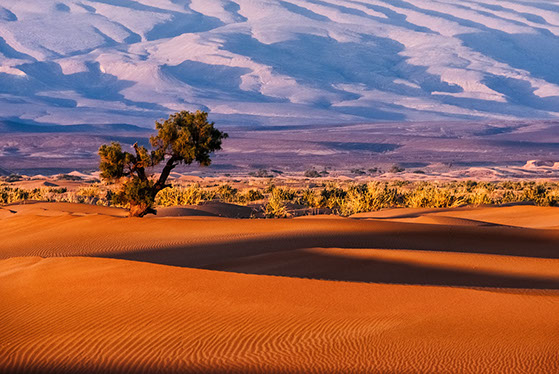 The country's Mediterranean climate is similar to that of southern California, with lush forests in the northern and central mountain ranges of the country, giving way to drier conditions and inland deserts further southeast. The Moroccan coastal plains experience remarkably moderate temperatures even in summer, owing to the effect of the cold Canary Current off its Atlantic coast.

In the Rif, Middle and High Atlas Mountains, there exist several different types of climates: Mediterranean along the coastal lowlands, giving way to a humid temperate climate at higher elevations with sufficient moisture to allow for the growth of different species of oaks, moss carpets, junipers, and Atlantic fir which is a royal conifer tree endemic to Morocco. In the valleys, fertile soils and high precipitation allow for the growth of thick and lush forests. Cloud forests can be found in the west of the Rif Mountains and Middle Atlas Mountains. At higher elevations, the climate becomes alpine in character, and can sustain ski resorts.

Southeast of the Atlas mountains, near the Algerian borders, the climate becomes very dry, with long and hot summers. Extreme heat and low moisture levels are especially pronounced in the lowland regions east of the Atlas range due to the rain shadow effect of the mountain system. The south-eastern most portions of Morocco are very hot, and include portions of the Sahara Desert, where vast swathes of sand dunes and rocky plains are dotted with lush oases.

In contrast to the Sahara region in the south, coastal plains are fertile in the central and northern regions of the country, and comprise the backbone of the country's agriculture, in which 95% of the population live. The direct exposure to the North Atlantic Ocean, the proximity to mainland Europe and the long stretched Rif and Atlas mountains are the factors of the rather European-like climate in the northern half of the country. That makes Morocco a country of contrasts. Forested areas cover about 12% of the country while arable land accounts for 18%. Approximately 5% of Moroccan land is irrigated for agricultural use.

Morocco is packed with unique cultural heritage, biodiversity, a destination plenty of amazing towns and historical sites to experience on a tourism visit. Morocco is one top hot spot destinations in Africa, attracting huge numbers of travellers, coming to experience the uniqueness of the Saharan desert and the high atlas mountains, waterfalls, with breathtaking sceneries.