What is a Hippo?

The hippo also called the common hippopotamus is a large, mostly herbivorous, semiaquatic mammal and ungulate native to sub-Saharan Africa. It is one of only two extant species in the family Hippopotamidae. There are two species of hippos; the large/common hippo and the smaller relative, the pygmy hippo. Hippos are the third-largest living land mammal, after elephants and white rhinos. Despite their large and bulky appearance, they have adaptations to their semi-aquatic environments allowing them to move swiftly on both water and land. Their feet have four-webbed toes that splay out to distribute weight evenly and therefore adequately support them on land, and their short legs provide powerful propulsion through the water. The pygmy hippos digits are more spread out and have less webbing and, proportionally, their legs are longer relative to its body size. They both have skin tones of purple-gray or slate color, with brownish pink coloring around their eyes and ears.

Hippos have barrel-shaped bodies with short legs and long muzzles. Their skeletal structures are graviportal, adapted to carrying their enormous weight, and their specific gravity allows them to sink and move along the bottom of a river. Hippopotamuses have small legs (relative to other megafauna) because the water in which they live reduces the weight burden 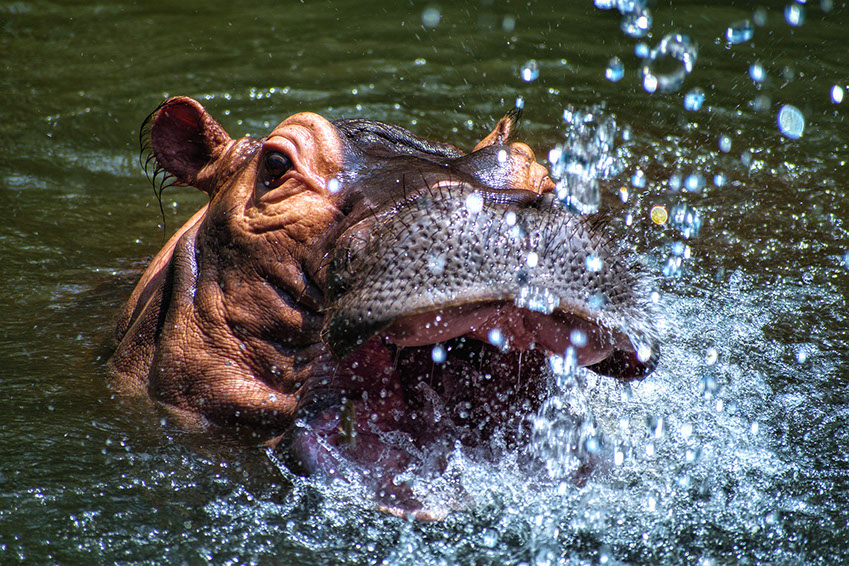 Where do Hippos Live?

Two hippo species are found in Africa. The common hippo (also known as the large hippo), found in East Africa, occurs south of the Sahara. The other much smaller species of hippo is the pygmy hippopotamus. Limited to very restricted ranges in West Africa, it is a shy, solitary forest dweller, and is now endangered.

Hippos are found in the rivers and lakes of the northern Democratic Republic of the Congo, Uganda, Tanzania and Kenya, north through to Ethiopia, Somalia and Sudan, west to The Gambia, and south to South Africa. 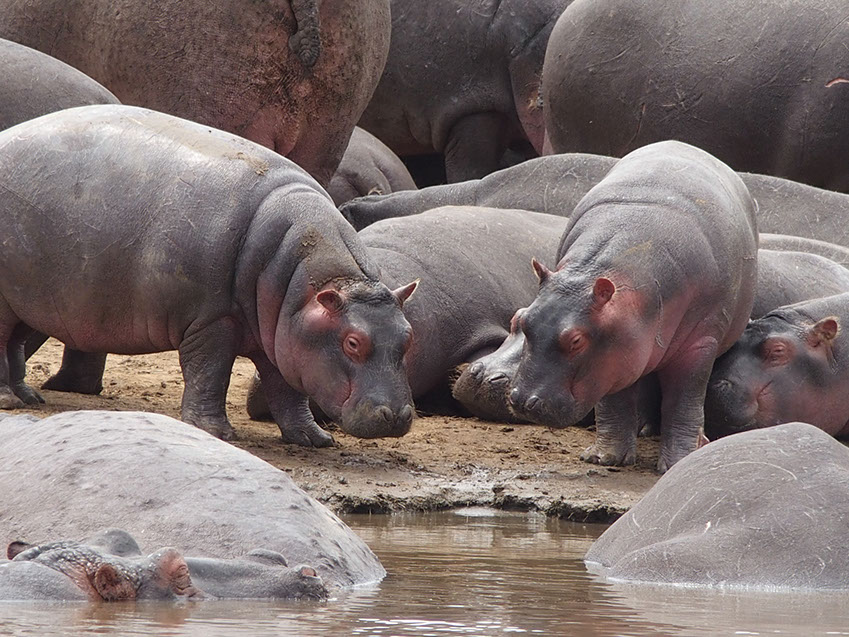 What are the Behaviours of Hippos?

Hippos have a flexible social system. Common hippos are usually found in mixed groups of anywhere from 20 to 100 individuals held by a territorial bull, but in periods of drought large numbers are forced to congregate near limited pools of water. This overcrowding disrupts the hierarchical system, resulting in even higher levels of aggression, with the oldest and strongest males asserting dominance. Old scars and fresh, deep wounds are signs of daily fights. Unlike their social cousins, pygmy hippos are solitary and aren’t territorial. If they encounter each other outside of mating, then they simply ignore each other.

Hippopotamuses love water, which is why the Greeks named them the “river horse.” Hippos spend up to 16 hours a day submerged in rivers and lakes to keep their massive bodies cool under the hot African sun. Hippos are graceful in water, good swimmers, and can hold their breath underwater for up to five minutes. However, they are often large enough to simply walk or stand on the lake floor, or lie in the shallows. Their eyes and nostrils are located high on their heads, which allows them to see and breathe while mostly submerged.

Hippo defecation creates allochthonous deposits of organic matter along the river beds. These deposits have an unclear ecological function. Because of their size and their habit of taking the same paths to feed, hippos can have a significant impact on the land across which they walk, both by keeping the land clear of vegetation and depressing the ground. Over prolonged periods, hippos can divert the paths of swamps and channels.

Hippos coexist with a variety of large predators. Nile crocodiles, Lions and spotted hyenas are known to prey on young hippos. However, due to their aggression and size, adult hippos are not usually preyed upon by other animals. Cases where large lion prides have successfully preyed on adult hippos have been reported; however, this predation is generally rare 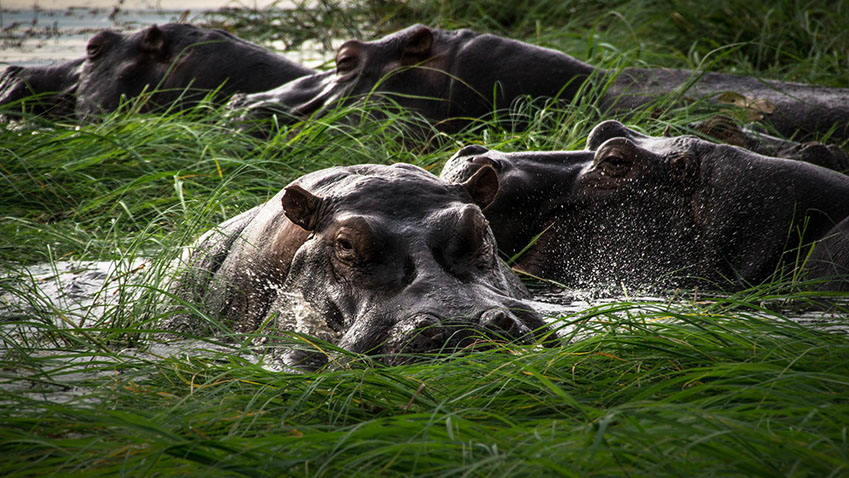 What do Hippos eat?

Like most herbivores, Hippos consume other plants if presented with them, but their diet in nature consists almost entirely of grass, with only minimal consumption of aquatic plants. Hippos are born with sterile intestines, and require bacteria obtained from their mothers' feces to digest vegetation