The Abu Simbel temples are two massive rock temples at Abu Simbel a village in Aswan Governorate, Upper Egypt, near the border with Sudan. They are situated on the western bank of Lake Nasser, about 230 km (140 mi) southwest of Aswan (about 300 km (190 mi) by road). The complex is part of the UNESCO World Heritage Site known as the "Nubian Monuments", which run from Abu Simbel downriver to Philae (near Aswan). The twin temples were originally carved out of the mountainside in the 13th century BC, during the 19th dynasty reign of the Pharaoh Ramesses II. They serve as a lasting monument to the king and his queen Nefertari, and commemorate his victory at the Battle of Kadesh. Their huge external rock relief figures have become iconic.

During his reign, Ramesses II embarked on an extensive building program throughout Egypt and Nubia, which Egypt controlled. Nubia was very important to the Egyptians because it was a source of gold and many other precious trade goods. He, therefore, built several grand temples there in order to impress upon the Nubians Egypt's might and Egyptianize the people of Nubia. The most famous temples are the rock-cut temples near the modern village of Abu Simbel, at the Second Nile Cataract, the border between Lower Nubia and Upper Nubia.  There are two temples, the Great Temple, dedicated to Ramesses II himself, and the Small Temple, dedicated to his chief wife Queen Nefertari. Construction of the temple complex started in approximately 1264 BC and lasted for about 20 years, until 1244 BC. It was known as the "Temple of Ramesses, beloved by Amun".

Abu Simbel in Upper Egypt was saved from the rising waters of Lake Nasser, growing behind the Aswan Dam, in a massive archaeological rescue plan sponsored by UNESCO in the 1960s. The complex of temples dedicated to the Pharaoh Ramsis II "the Great" remain an evocative and unforgettable destination. Abu Simbel is a village lying 280 km south of Aswan and only 40 km north of the Sudanese border. It is a very small settlement with very little to attract visitors other than its great temples for which it is famous. Few tourists linger for more than a few hours, although there are 5 hotels to attract visitors to stay the night.

The temples at Abu Simbel were formerly located further down the hillside, facing the Nile in the same relative positions, but due to the rising waters of Lake Nasser, the original locations are underwater. In the 1960's, each temple was carefully sawed into numbered stone cubes, moved uphill, and reassembled before the water rose.

The Great Temple of Ramses II was reassembled fronting a fake mountain, built like a domed basketball court, where the stone cubes occupy a section under the dome; from outside, the fake mountain looks like solid rock. Archaeologists have concluded that the immense sizes of the statues in the Great Temple were intended to scare potential enemies approaching Egypt's southern region, as they traveled down the Nile from out of Africa.

The Great Temple of Abu Simbel

The Great Temple at Abu Simbel, which took about twenty years to build, was completed around year 24 of the reign of Ramesses the Great (which corresponds to 1265 BC). It was dedicated to the gods Amun, Ra-Horakhty, and Ptah, as well as to the deified Ramesses himself.[8] It is generally considered the grandest and most beautiful of the temples commissioned during the reign of Ramesses II, and one of the most beautiful in Egypt.

The single entrance is flanked by four colossal, 20 m (66 ft) statues, each representing Ramesses II seated on a throne and wearing the double crown of Upper and Lower Egypt. The statue to the immediate left of the entrance was damaged in an earthquake, causing the head and torso to fall away; these fallen pieces were not restored to the statue during the relocation but placed at the statue's feet in the positions originally found. Next to Ramesses's legs are a number of other, smaller statues, none higher than the knees of the pharaoh, depicting: his chief wife, Nefertari Meritmut; his queen mother Mut-Tuy; his first two sons, Amun-her-khepeshef and Ramesses B; and his first six daughters: Bintanath, Baketmut, Nefertari, Meritamen, Nebettawy and Isetnofret.

Getting Around Abu Simbel

The town of Abu Simbel is small enough to navigate on foot. Few people actually stay in Abu Simbel as most opt for the day-trip from Aswan or travel by cruise ship and stay on the ship in Abu Simbel.

Read more about the temples before arriving: time at Abu Simbel will likely be limited, with little time to read about the stone carvings inside the temples. Beyond the temples themselves, the detailed description of sawing and moving the stone cubes is also an interesting story to read. As with the Pyramids at Giza, reading about them, before arriving, in no way diminishes the impact of seeing them firsthand.

Where to Stay in Abu Simbel

Many people do Abu Simbel as a day trip and fall asleep on the ride to/from Abu Simbel due to its early time. The only reason to stay overnight is to see the Sound & Light show or to break up one very long travel day into two kind-of-long travel days. Note that getting up at 5am to get to the temple right when the gate opens will not ensure a private visit as the cruise ship passengers will also arrive at 5am. If you want a private time in the Abu Simbel temples, the best time is around 7-8am: after the cruise ship visitors have left, and before the day trip visitors from Aswan arrive. 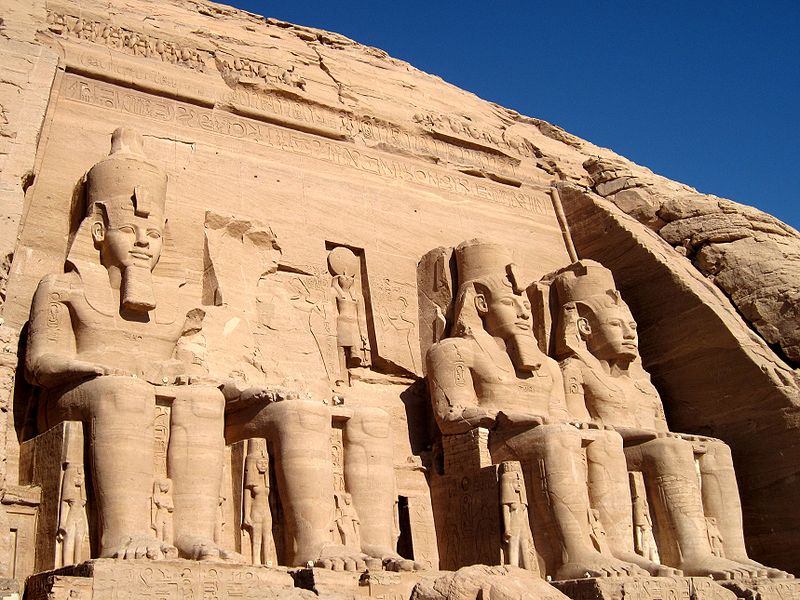 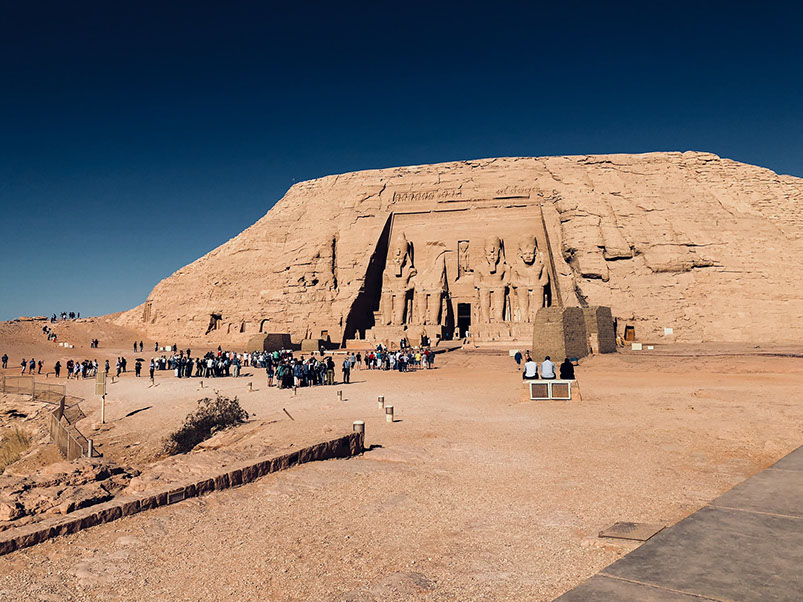