From 1.5 to 33 kilograms, depending on the species

From 30 to 152 centimeters, depending on the species

Estimated to 20 years in the wild

What is a Pangolin?

Pangolin are mammals of the order Pholidota. The one extant family, Manidae, has three genera: Manis, Phataginus and Smutsia. Phataginus and Smutsia each include two species living in Sub-Saharan Africa. Pangolin have large, protective keratin scales covering their skin; they are the only known mammals with this feature. They live in hollow trees or burrows, depending on the species. Pangolin are nocturnal, and their diet consists of mainly ants and termites, which they capture using their long tongues. The physical appearance of a pangolin is marked by large hardened overlapping plate-like scales, which are soft on newborn pangolin, but harden as the animal matures. They are made of keratin, the same material from which human fingernails and tetrapod claws are made, and are structurally and compositionally very different from the scales of reptiles. The pangolin's scaled body is comparable in appearance to a pine cone. It can curl up into a ball when threatened, with its overlapping scales acting as armour, while it protects its face by tucking it under its tail. The scales are sharp, providing extra defence from predators.

Pangolin can emit a noxious-smelling chemical from glands near the anus, similar to the spray of a skunk. They have short legs, with sharp claws which they use for burrowing into ant and termite mounds and for climbing 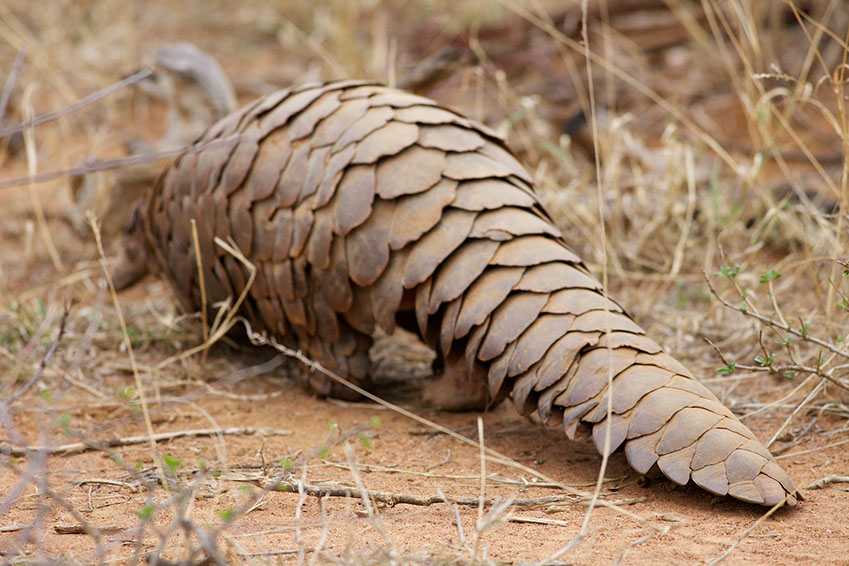 Where do Pangolin Live?

The Pangolin inhabits many countries across the African Continent, with the largest concentration in East-Africa (Uganda, Tanzania, and western Kenya), West Africa (Guinea, Liberia, Côte d’Ivoire, Ghana, Nigeria, and neighbouring countries) and Southern Africa (South-Africa, Namibia, Zimbabwe, Zambia and other neighbouring countries). It is found mainly in the savannah, rainforest, and forest, inhabiting areas with large termite populations and available water. Pangolin does not inhabit high-altitude areas. The Pangolin is threatened by habitat destruction and deforestation, and hunting for the bush meat trade. 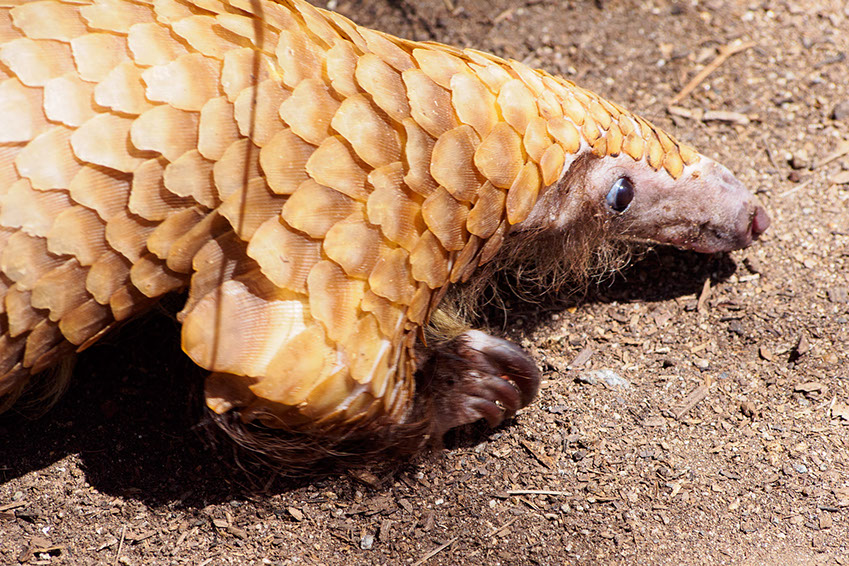 What are the Behaviours of Pangolin?

Pangolin are insectivorous. Most of their diet consists of various species of ants and termites and may be supplemented by other insects, especially larvae. They are somewhat particular and tend to consume only one or two species of insects, even when many species are available to them. A pangolin can consume 140 to 200 grams (5 to 7 ounces) of insects per day. Pangolin are an important regulator of termite populations in their natural habitats.

Most pangolin are nocturnal animals which use their well-developed sense of smell to find insects. The long-tailed pangolin is also active by day, while other species of pangolin spend most of the daytime sleeping, curled up into a ball.

Pangolin have very poor vision, so they rely heavily on smell and hearing. Pangolin also lack teeth; therefore they have evolved other physical characteristics to help them eat ants and termites. Their skeletal structure is sturdy and they have strong front legs that are useful for tearing into termite mounds. They use their powerful front claws to dig into trees, ground, and vegetation to find prey, then proceed to use their long tongues to probe inside the insect tunnels and to retrieve their prey.

Some pangolin walk with their front claws bent under the foot pad, although they use the entire foot pad on their rear limbs. The Pangolin are also good swimmers.

The structure of their tongue and stomach is key to aiding pangolin in obtaining and digesting insects. Their saliva is sticky, causing ants and termites to stick to their long tongues when they are hunting through insect tunnels. Without teeth, pangolin also lack the ability to chew; however, while foraging, they ingest small stones (gastroliths) which accumulate in their stomachs to help to grind up ants. This part of their stomach is called the gizzard, and it is also covered in keratinous spines. These spines further aid in the grinding up and digestion of the pangolin's prey. 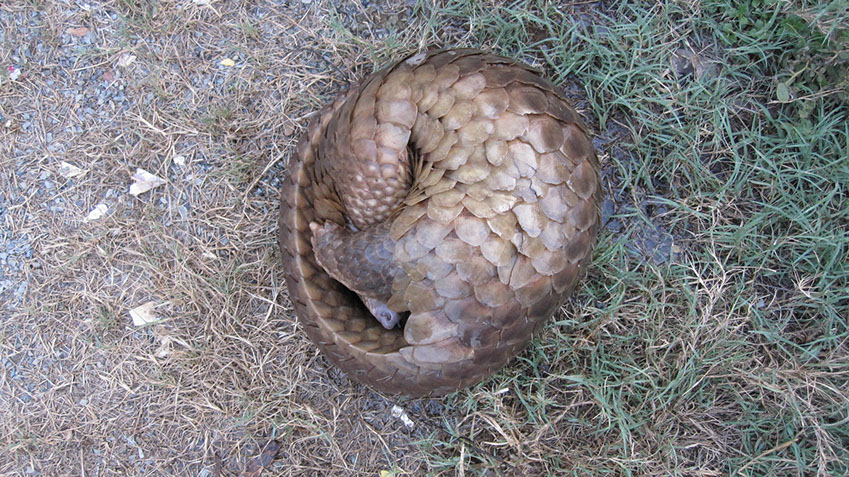 What do Pangolin eat?

Pangolin are a specialized insectivore that lacks teeth and the ability to chew. Its diet mainly consists of ants and termites, which it finds by tearing open anthills and termite nests, both subterranean and mound-type. 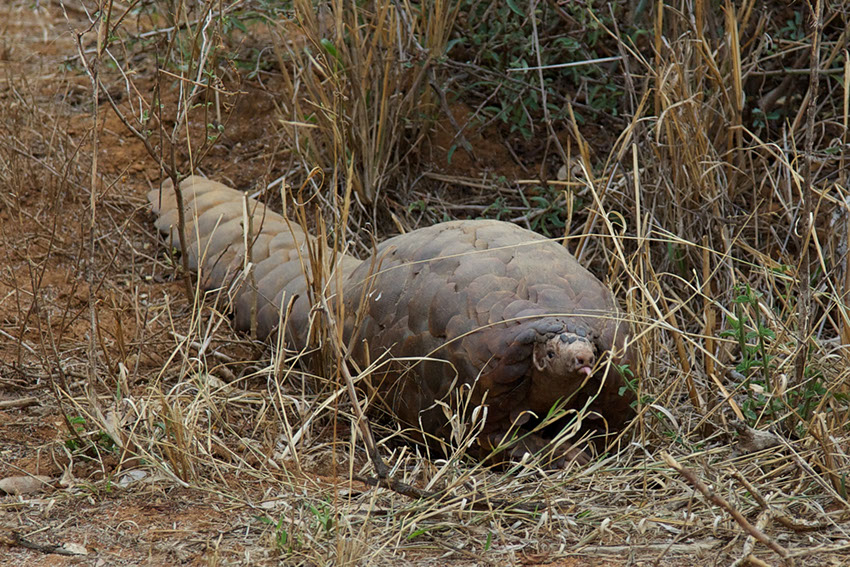 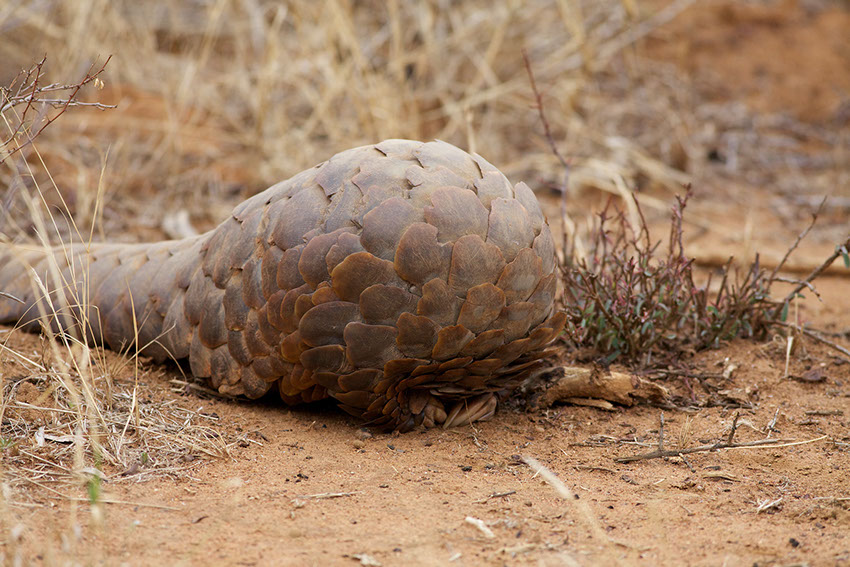