The High Atlas is a region in Morocco covering the mountain range and surrounding destinations such as Marrakech. It's a regular destination for mountain hikers, ski enthusiasts, or travellers interested in the indigenous Berber culture found throughout its many peaks and valleys. Berbers are the indigenous North Africans, having inhabited the north coast of Africa ranging from present day Morocco to Egypt, for at least 5,000 years. The Atlas mountains are home to relatively pure Berber populations, who live in earthen adobe houses

High Atlas, also called the Grand Atlas, is a mountain range in central Morocco, North Africa, the highest part of the Atlas Mountains. The High Atlas rises in the west at the Atlantic Ocean and stretches in an eastern direction to the Moroccan-Algerian border. At the Atlantic and to the southwest the range drops abruptly and makes an impressive transition to the coast and the Anti-Atlas range. To the north, in the direction of Marrakech, the range descends less abruptly.

The range includes Jbel Toubkal, which at 4,167 m (2.589 mi; 13,671 ft) is the highest in the range and lies in Toubkal National Park. The range serves as a weather system barrier in Morocco running east–west and separating the Sahara from the Mediterranean and continental zones to the north and west. In the higher elevations of the massif, snow falls regularly, allowing winter sports. Snow lasts well into late spring in the High Atlas, mostly on the northern faces of the range.

People of The High Atlas

Berbers are the indigenous North Africans, having inhabited the north coast of Africa ranging from present day Morocco to Egypt, for at least 5,000 years. The Arab invasion of North Africa in the 7th century forced Berbers to assimilate, or take refuge in the Atlas mountains. It is said that as much as 80% of the Moroccan population is racially Berber, however only half of those people live culturally Berber lifestyles. Berbers have adopted Islam as their primary religion, but continue to speak Berber languages in their villages, and practice Berber music, spirituality, and art.

The Atlas mountains are home to relatively pure Berber populations, who live in earthen adobe houses. Marrakech is the only Moroccan city with a recognizable Berber ambiance, being situated at the base of the southern Atlas mountains. The colour of Marrakech is the colour of the Berbers - reddish, ochre and earth tones are the only colours you see adorning the adobe buildings, giving the impression that the entire city springs from the earth

There are two types of Alpine Climates in the High Atlas:

Tourism Attractions in The High Altas

The High Atlas has plenty of tourist attractions to offer; At the foot of the High Atlas one finds Aït Benhaddou. At approximately mid-range, the Amesfrane Rock Wall rises some 1,650 feet (500 m) from a dry riverbed wadi. The formation is composed of rounded columns patterned with horizontal ridges that occurred as a result of erosion, which caused travellers to nickname it "the Cathedral", for its resemblance to a gothic cathedral. Among the summits at a height of 1,600 m (5,200 ft) height lies the Kasbah of Telouet on the road to Marrakech. The canyons and ravines of the Dadès and the Todra are also points of interest. 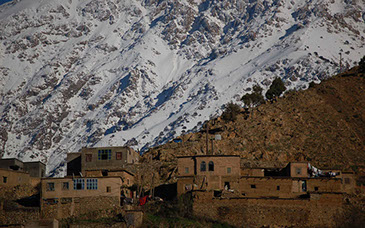