Augrabies Falls National Park is a national park located around the Augrabies Falls, about 120 km west of Upington in the Northern Cape Province, South Africa. It was established in 1966.

The Augrabies Falls National Park covers an area of 820 km²[3] and stretches along the Orange River. The area is very arid. The waterfall is about 60 metres high and is awe-inspiring when the river is in flood. The gorge below the falls averages about 240 m deep and runs for 18 kilometres. The gorge provides an impressive example of erosion into a granitic basement

Augrabies is situated in a semi-arid region, which implies low annual rainfall and extreme variations of temperatures. In the peak summer months (January / February) the average daytime temperature is 41°C, but highs of 46°C have been recorded. During these months the high temperatures are further aggravated by the many rocks where temperatures can reach up to 70°C during the day. Summer nights are usually more pleasant but temperatures will remain high at around 25°C.

During winter months the average daytime temperature often hovers around 20°C but lower temperatures are a possibility. Winter nights average around 0°C although the temperature drops to -5° occasionally. Autumn and spring are characterized by pleasant, moderate temperatures.

The average annual rainfall in the park is 124mm, with most rains occurring between November and April. Summer rain usually falls in short, heavy bursts, accompanied by spectacular thunderstorms and strong winds. Winter rains are gentle and last 1-3 days resulting in a flower paradise.

The name Augrabies was given to the Water Fall by a Swede, Hendrik Jakob Wikar, when he passed there in 1799. The name is derived from the Nama word as the Khoi people would refer to “Aukoerebis” meaning the "Place of Great Noise." This refers to the Orange River water thundering its way down the 56 m spectacular main Water Fall. In 1954 the Upington Publicity Association requested the National Parks Board to proclaim the water fall a national park. After the Minister of Lands approved the Park in principle in 1955, the Department of Water Affairs objected to the proclamation of a national park. After a series of negotiations, Augrabies Falls National Park was eventually proclaimed on 5 August 1966. The park currently consists of 55 383 hectares

Early Stone Age: The ancestors of modern history have inhabited the area surrounding the Orange River since the Early Stone Age. During this time, there is evidence that early man had developed weapons for hunting animal like hippopotamus. They knew to establish themselves near good water sources like the Orange River. During the Middle Stone Age man had created more formal work tools and began to utilise fire. The Late Stone Age, which dates back 22 000 years, is characterized by tools that are smaller from the previous periods. The most prolific archaeological features are the stone cairns or graves from the later Stone Age. Excavations have shown that not all the cairns contains human skeletal remains.

How to get there: Augrabies Falls National Park

Augrabies Falls is located in a remote area of the expansive Northern Cape Province. Despite this many tourists are welcomed at the park every year due to its central location along the N14 highway which connects the north-eastern provinces with the west coast region. The park is also a favoured stop-over for travelers coming to or from the Kgalagadi Transfrontier Park.

Apart from the Augrabies Falls, key activities in the park include night drives during peak season; the Gariep trail and the Klipspringer 3 day trail hike. The Augrabies National Park is approximately an 8 hours drive from Cape Town, and 10 hours from Johannesburg 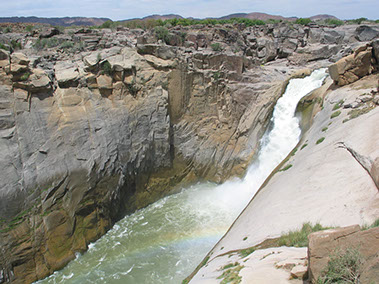 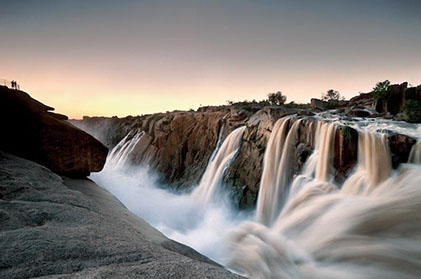 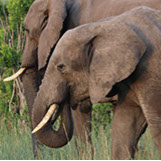 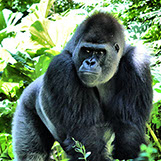 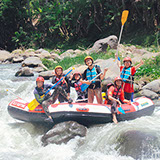 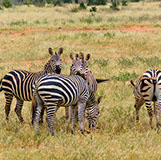