Rabat is the capital city of Morocco. The city is located on the Atlantic Ocean at the mouth of the river Bou Regreg. On the facing shore of the river lies Salé, Rabat's bedroom community. Together with Temara the cities account for a combined metropolitan population of 2.6 million. It is an easy-going city by Moroccan standards. The city of Rabat is a UNESCO World Heritage Site.

Rabat is the capital city of Morocco and the country's seventh largest city with an urban population of approximately 580,000 (2014) and a metropolitan population of over 1.2 million. It is also the capital city of the Rabat-Salé-Kénitra administrative region. Rabat is located on the Atlantic Ocean at the mouth of the river Bou Regreg, opposite Salé, the city's main commuter town.

The name Rabat comes from the Arabic word ar-ribāṭ meaning the ribat, an Islamic base or fortification. This name is short for ribāṭu l-fatḥ meaning the ribat of conquest or stronghold of victory a title given by the Almohads when they established the city as a naval base in 1170

Rabat was founded in the 12th century by the Almohad ruler Abd al-Mu'min as a military town. The city steadily grew but went into an extended period of decline following the collapse of the Almohads. In the 17th century Rabat became a haven for Barbary pirates. The French established a protectorate over Morocco in 1912 and made Rabat its administrative center. Morocco achieved independence in 1955 and Rabat became its capital.

Rabat is an administrative city. It has many shopping districts and residential neighbourhoods. The geographically spread out neighbourhoods are as follows; The heart of the city consists of three parts: the Medina (old town); the Oudayas and Hassan both located to meet the Bou Regreg; and the Atlantic Ocean.

Here how you can get in Rabat;

There are many things to do here, as with most Moroccan cities it is enough just to wander around and adventure where something takes your fancy; 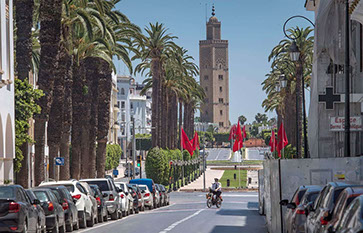