Tangier is an important port city destination in Morocco. The third most populous city in the country, it's a popular entry point to Morocco and Africa as a whole due to its proximity to Spain.

Tangier is a fascinating Moroccan city to visit. It has many of the things that travellers love a sense of exotic mystery, interesting history, beautiful vistas, unspoiled beaches, and friendly people. It is an interesting mix of the cultures of north Africa, Spain, and France and indeed has a very international history, and has traditionally been home to people from several different cultures.

Tangier is a city in northwestern Morocco. It is on the Maghreb coast at the western entrance to the Strait of Gibraltar, where the Mediterranean Sea meets the Atlantic Ocean off Cape Spartel. The town is the capital of the Tanger-Tetouan-Al Hoceima region, as well as the Tangier-Assilah prefecture of Morocco.

Tangier was formally known as Colonia Julia Tingi ("The Julian Colony of Tingis") following its domination by colony status during the Roman Empire. The nicknames "Bride of the North" and "Door of Africa" reference its position in far northwestern Africa near the Strait of Gibraltar.

Founded sometime in the 5th century BCE, Tangier has been part of all major empires in the region throughout history. During the last centuries major European powers have contested for the city at the southern bank of the Strait of Gibraltar in order to gain control over the traffic between the Atlantic and the Mediterranean. This game even brought France and Germany to the brink of war in 1905. Deemed too important to be controlled by a single country, it was under joint international control from 1925 to 1956 (during that period known as the Tangier International Zone). During World War II and the Cold War it was also major center for spying activities by major powers, as well as a playground for gamblers, crooks and millionaires.

Central Tangier lies about 23 km (14 mi) east of Cape Spartel, the southern half of the Strait of Gibraltar. It nestles between two hills at the northwest end of the Bay of Tangier, which historically formed the best natural harbour anywhere on the Moroccan coast before the increasing size of ships required anchorage to be made further and further from shore. The shape of the gradually-rising underlying terrain creates the effect of the city as an amphitheatre, with the commercial district in the middle.

The northwest of Morocco is the wettest part of the country. Compared to the south of the country, the summers are milder and the winters can be relatively cold. Facing the Atlantic directly, temperatures in Tangier are usually even a couple degrees cooler than at the Spanish side of the strait. The summers are relatively hot and sunny and the winters are wet and mild.

Here is how you can get in Tangier;

Tangier is very easy to navigate around; the two main roads are Boulevard Mohammed V which runs from near the Medina through the ville nouvelle and Boulevard Mohammed VI (formerly Ave des FAR) which runs along from the beachfront from the port to Malabata. The exception is the Medina (old town), a complex array of alleyways some of which can only be accessed on foot. Mohammed V has a whole range of clothes shops, pharmacies and cafes as well as Hotel Flandria, Hotel Rembrandt. Hotel El Minzah lies just off this road. Mohammed VI runs along the beach front where you will find numerous hotels (Rif, Ramada, Sherezade, Solazure, Tariq, Movenpick), bars, discos, restaurants and cafes. Most hostels are on the roads heading uphill near the port area and in the Medina.

Tangier is a fascinating tourist city destination with plenty of tourist attractions to offer; 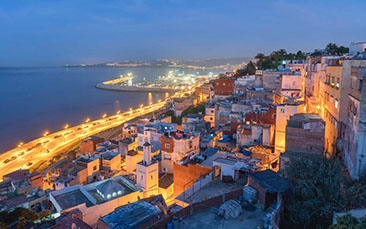