Windhoek is the capital and largest city of Namibia. It is located in central Namibia in the Khomas Highland plateau area, at around 1,700 metres (5,600 ft) above sea level, almost exactly at the country's geographical centre. The population of Windhoek in 2020 was 431,000 which is growing continually due to an influx from all over Namibia.

Windhoek is Namibia's capital and largest city (population of 400,000). It is in the geographic centre of the country at an elevation of 1,600m. This is the city where most safaris travelling through Namibia begin, and also the first point of entry in Namibia should you arrive by airplane. Windhoek is the social, economic, political, and cultural centre of the country. Nearly every Namibian national enterprise, governmental body, educational and cultural institution is head quartered there.

Theories vary on how the place got its modern name of Windhoek. Most believe it is derived from the Afrikaans word wind-hoek (wind corner). Another theory suggests that Captain Jonker Afrikaner named Windhoek after the Winterhoek Mountains at Tulbagh in South Africa, where his ancestors had lived. The first known mention of the name Windhoek was in a letter from Jonker Afrikaner to Joseph Tindall, dated 12 August 1844

Expanding the town area has – apart from financial restrictions – proven to be challenging due to its geographical location. In southern, eastern and western directions, Windhoek is surrounded by rocky, mountainous areas, which make land development costly. The southern side is not suitable for industrial development because of the presence of underground aquifers. This leaves the vast Brakwater area north of town the only feasible place for Windhoek's expansion

In 1840 Jonker Afrikaner established an Orlam settlement at Windhoek. He and his followers stayed near one of the main hot springs, located in the present-day Klein Windhoek suburb. He built a stone church that held 500 people; it was also used as a school. Two Rhenish missionaries, Carl Hugo Hahn and Franz Heinrich Kleinschmidt, started working there in late 1842. Two years later they were driven out by two Methodist Wesleyans, Richard Haddy and Joseph Tindall. A request by merchants from Lüderitzbucht resulted in the declaration of a German protectorate over what was called German South West Africa, which is today Namibia in 1884. The borders of the German colony were determined in 1890 and Germany sent a protective corps, the Schutztruppe under Major Curt von François, to maintain order. Colonial Windhoek was founded on 18 October 1890, when von François fixed the foundation stone of the fort, which is now known as the Alte Feste (Old Fortress). After 1907, development accelerated as indigenous people migrated from the countryside to the growing town to seek work. 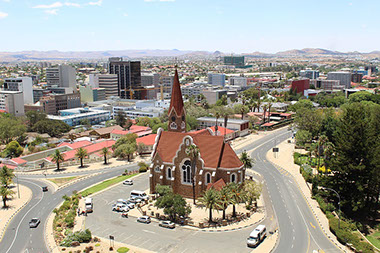 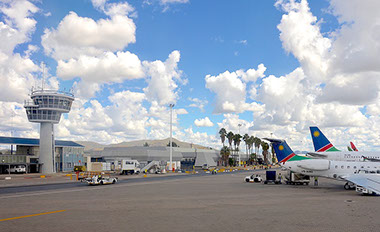 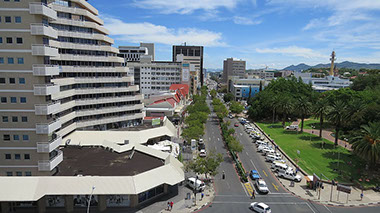