Marrakesh, also spelt as Marrakech, is the fourth largest city in the Kingdom of Morocco. It is the capital of the mid-southwestern region of Marrakesh-Safi. It is west of the foothills of the Atlas Mountains. Marrakesh is the main tourist destination in Morocco, North Africa and the in the African Continent. Marrakesh City's old town is also a UNESCO World Heritage Site

Marrakesh, also spelt Marrakech, is one of the imperial cities of Morocco. The name Marrakesh originates from the Amazigh (Berber) words mur (n) wakush, which means "Land of God". It is the third largest city in Morocco after Casablanca and Rabat, and lies near the foothills of the snow-capped Atlas Mountains and a few hours away from the foot of the Sahara Desert. Its location and contrasting landscape has made it an enviable destination in Morocco. The city is divided into two parts: the Medina, the historical city, and the new European modern district called Gueliz or Ville Nouvelle. The Medina is full of intertwining narrow passageways and local shops full of character; it also contains the large square Djemaa El-Fna, where many hotels are located and tourists, locals and vendors congregate. In contrast, Gueliz plays host to modern restaurants, fast food chains and big brand stores.

A hot semi-arid climate predominates at Marrakesh. Average temperatures range from 12 °C (54 °F) in the winter to 26–30 °C (79–86 °F) in the summer. The relatively wet winter and dry summer precipitation pattern of Marrakesh mirrors precipitation patterns found in Mediterranean climates. However, the city receives less rain than is typically found in a Mediterranean climate, resulting in a semi-arid climate classification.

The Marrakesh area was inhabited by Berber farmers from Neolithic times, and numerous stone implements have been unearthed in the area. Marrakesh was founded in 1062 (454 in the Hijri calendar) by Abu Bakr ibn Umar, chieftain and second cousin of the Almoravid king Yusuf ibn Tashfin. Under the berber dynasty of the Almoravids, pious and learned warriors from the desert, numerous mosques and madrasas (Quranic schools) were built, developing the community into a trading centre for the Maghreb and sub-Saharan Africa. Marrakesh grew rapidly and established itself as a cultural and religious centre, supplanting Aghmat, which had long been the capital of Haouz. Andalusian craftsmen from Cordoba and Seville built and decorated numerous palaces in the city, developing the Umayyad style characterised by carved domes and cusped arches. This Andalusian influence merged with designs from the Sahara and West Africa, creating a unique style of architecture which was fully adapted to the Marrakesh environment.

For centuries Marrakesh has been known as the location of the tombs of Morocco's seven patron saints (sebaatou rizjel). When sufism was at the height of its popularity during the late 17th-century reign of Moulay Ismail, the festival of these saints was founded by Abu Ali al-Hassan al-Yusi at the request of the sultan. The tombs of several renowned figures were moved to Marrakesh to attract pilgrims, and the pilgrimage associated with the seven saints is now a firmly established institution. 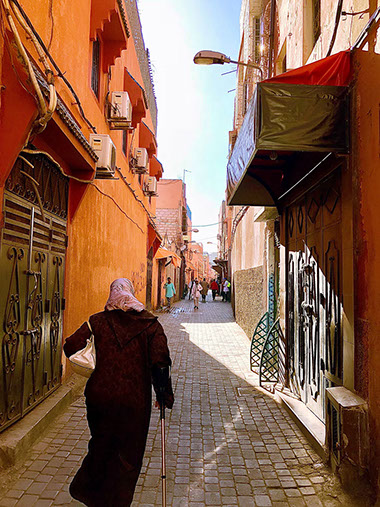 Once in the medina, everything can be seen on foot, though you'll be doing a lot of walking. Many tourist destinations are signposted by brown, red or green signs affixed to posts or to buildings. 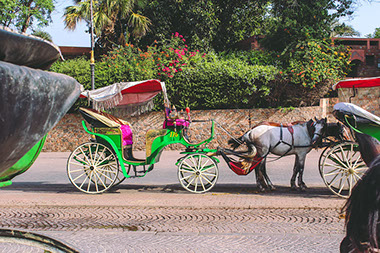 There is much to see and do in Marrakesh. An entire day can be dedicated to wandering around all the different souks, seeking out the best bargains. The city also offers several historical and architectural sites as well as some interesting museums;

Marrakesh has an amazing choice of places to stay ranging from tented camps outside Marrakesh to cheap hostels and hotels that can be charming or seedy to luxurious kasbahs in luxurious gardens or the traditional riad (garden courtyard) hotels. Wherever you choose ( or can afford) to stay it really is a must to visit one of the riad hotels to see this amazing style of architecture. Most riad managers will be happy to show you around provided that they are not too busy and in some riads you can even book a lunch or dinner without being a resident provided that the riad is not privately rented. For example, see Riad Cinnamon, Riad Laksiba and Riad Papillon.

The Medina is packed with Riads and Dars (old grand houses converted into hotels and inns). Riads should have gardens; with smaller Dars having open courtyards. However the term Riad is used very loosely today to describe a house with an internal open-air centre. These are wonderful places to stay to get a feel for life in Marrakesh; 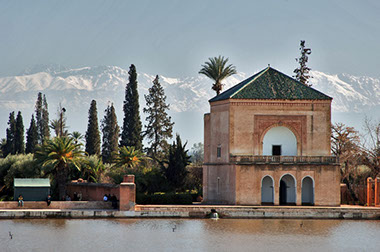