Mount Sinai traditionally known as Jabal Musa, is a mountain in the Sinai Peninsula of Egypt that is a location of the biblical Mount Sinai, the place where Moses received the Ten Commandments. It is a 2,285-metre (7,497 ft) moderately high mountain near the city of Saint Catherine in the region known in modern times as the Sinai Peninsula. It is next to Mount Catherine (at 2,629 m or 8,625 ft, the highest peak in Egypt). It is surrounded on all sides by higher peaks of the mountain range.

Mount Sinai's rocks were formed in the late stage of the Arabian-Nubian Shield's (ANS) evolution. Mount Sinai displays a ring complex that consists of alkaline granites intruded into diverse rock types, including volcanics. The granites range in composition from syenogranite to alkali feldspar granite. The volcanic rocks are alkaline to peralkaline and they are represented by subaerial flows and eruptions and subvolcanic porphyry. Generally, the nature of the exposed rocks in Mount Sinai indicates that they originated from differing depths.

Immediately north of the mountain is the 6th century Saint Catherine's Monastery. The summit has a mosque that is still used by Muslims, and a Greek Orthodox chapel, constructed in 1934 on the ruins of a 16th-century church, that is not open to the public. The chapel encloses the rock which is considered to be the source for the biblical Tablets of Stone. At the summit also is "Moses' cave", where Moses was said to have waited to receive the Ten Commandments.

Mount Sinai commonly known as Jabal Musa in Egypt, is in the middle of the Sinai Peninsula, Egypt and rises 2,285 metres above sea level. The Sinai Peninsula or simply Sinai is a peninsula in Egypt, and the only part of the country located in Asia. It is situated between the Mediterranean Sea to the north and the Red Sea to the south, and is a land bridge between Asia and Africa. Sinai has a land area of about 60,000 km2 (23,000 sq mi) (6 percent of Egypt's total area) and a population of approximately 600,000 people. Administratively, the vast majority of the area of the Sinai Peninsula is divided into two governorates: the South Sinai Governorate and the North Sinai Governorate. Three other governorates span the Suez Canal, crossing into African Egypt: Suez Governorate on the southern end of the Suez Canal, Ismailia Governorate in the center, and Port Said Governorate in the north.

The peninsula acquired the name Sinai in modern times due to the assumption that a mountain near Saint Catherine's Monastery is the Biblical Mount Sinai. Mount Sinai is one of the most religiously significant places in the Abrahamic faiths.

The Sinai Peninsula has been a part of Egypt from the First Dynasty of ancient Egypt (c. 3100 BC). This comes in stark contrast to the region north of it, the Levant (present-day territories of Syria, Lebanon, Jordan, Israel and Palestine), which, due largely to its strategic geopolitical location and cultural convergences, has historically been the center of conflict between Egypt and various states of Mesopotamia and Asia Minor. In periods of foreign occupation, the Sinai was, like the rest of Egypt, also occupied and controlled by foreign empires, in more recent history the Ottoman Empire (1517–1867) and the United Kingdom (1882–1956). Israel invaded and occupied Sinai during the Suez Crisis (known in Egypt as the Tripartite Aggression due to the simultaneous coordinated attack by the UK, France and Israel) of 1956, and during the Six-Day War of 1967. On 6 October 1973, Egypt launched the Yom Kippur War to retake the peninsula, which was unsuccessful. In 1982, as a result of the Israel–Egypt Peace Treaty of 1979, Israel withdrew from all of the Sinai Peninsula except the contentious territory of Taba, which was returned after a ruling by a commission of arbitration in 1989.

Sinai is triangular in shape, with northern shore lying on the southern Mediterranean Sea, and southwest and southeast shores on Gulf of Suez and Gulf of Aqaba of the Red Sea. It is linked to the African continent by the Isthmus of Suez, 125 kilometres (78 mi) wide strip of land, containing the Suez Canal. The eastern isthmus, linking it to the Asian mainland, is around 200 kilometres (120 mi) wide. The peninsula's eastern shore separates the Arabian plate from the African plate. Most of the Sinai Peninsula is divided among the two governorates of Egypt: South Sinai (Ganub Sina) and North Sinai (Shamal Sina). Together, they comprise around 60,000 square kilometres (23,000 sq mi) and have a population (January 2013) of 597,000. Three more governates span the Suez Canal, crossing into African Egypt: Suez (el-Sewais) is on the southern end of the Suez Canal, Ismailia (el-Isma'ileyyah) in the centre, and Port Said in the north.

How to Get to Mount Sinai "Jabal Musa"

Your only choice of transport is by road. Dahab is 2 hours and 133 kilometers away, Nuweiba is 120km and a similar 2 hours away, while the trip from Sharm el-Sheikh (230km) is closer to 3 hours. Most visitors arrive on tours that arrive at approximately 1am at the foot of the mountain in order to climb Mount Sinai overnight and watch the sunrise. Any guesthouse in Sinai can arrange for you to join a tour. There are also several camps, guesthouses and hotels in St. Catherine that can accommodate tourists and travellers alike.

Whether you're going from the airport to your hotel, traveling from beach resort to beach resort, trekking up to St. Catherine's Monastery and Mount Sinai, or heading to Nuweiba to catch the ferry to Aqaba, Jordan, the trick to getting around in Sinai is to coordinate all ground transport through your hotel.

The Monastery of St. Catherine, at the foot of the mountain, is the easier of the two destinations here. Looking more like a fortress than a church, access is through a massive iron gate shut for the night and opened in the morning from 9 AM to 12 AM only (daily except Friday and Sunday). Note that the monastery observes the Greek Orthodox rites and is thus also closed for Christmas and Easter as calculated by the Greek Orthodox calendar. It was declared a UNESCO World Heritage site in 2002.

Things to do at Mount Sinai "Jabal Musa"

Climbing Mount Sinai is the main objective for most visitors. A local guide is required despite the fact the trails are well signposted once you get onto them. There are two routes to choose from, entrances to which are rather poorly signposted, so choose carefully especially if climbing at night. Both paths lead to natural amphitheater known as Elijah's Hollow or the Seven Elders of Israel, where you'll find a teahouse for a break. From there, it's a final 750 steps (30 minutes) to reach the summit.

At the top you will find a small chapel dedicated to the Holy Trinity, constructed in 1934 on the ruins of an older 16th-century church. Better yet, if you timed your ascent right, you can see the sunrise over the parched, rocky expanse of the Sinai. Note that it will be much cooler at the summit than on the coast, and in the winter at night subzero temperatures and even snow are not unknown. Dress warmly in layers, a flashlight is also a must.

Where to Stay around Mount Sinai "Jabal Musa"

Mount Sinai "Jabal Musa" and Saint Catherine Monastery has quite a few camps, guesthouses and hotels.

The only way out from Mount Sinai is to get back to the coast. There are a few options: 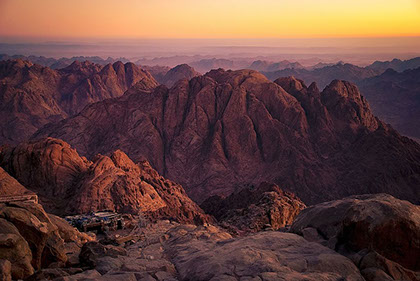 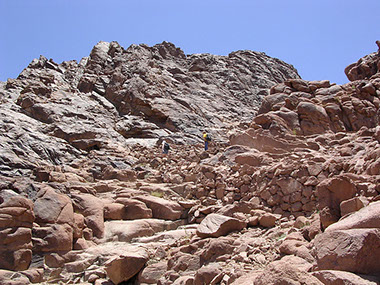 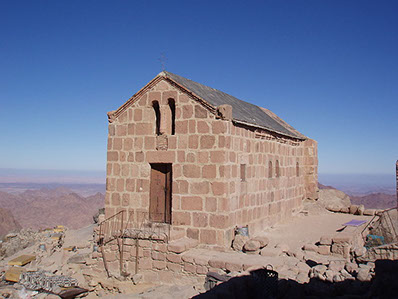 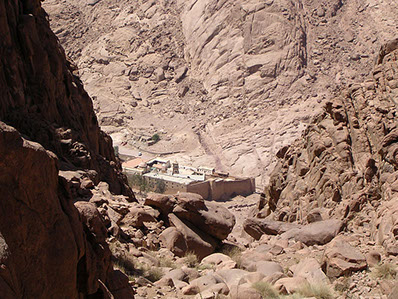 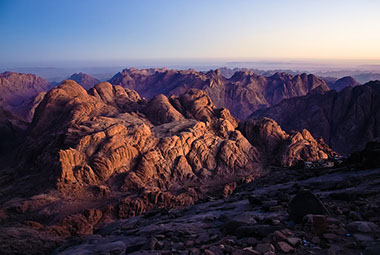